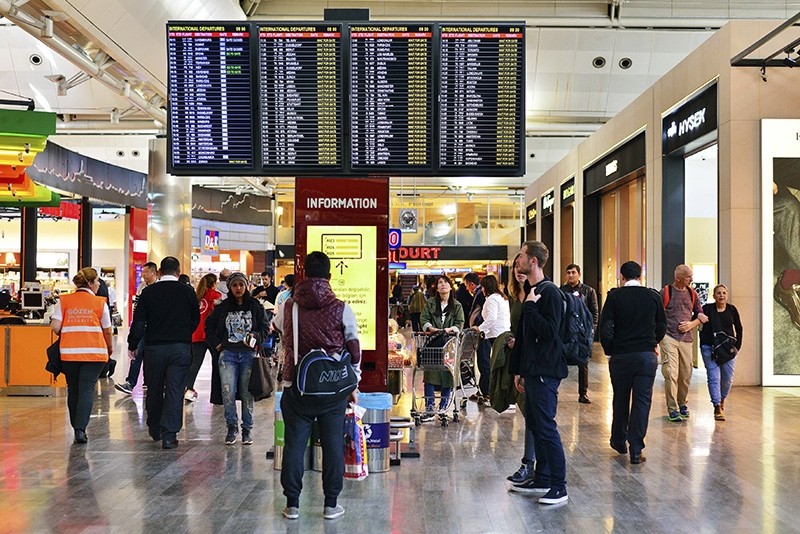 More travelers choosing to fly into Turkish airports helped boost Europe's overall air passenger traffic by 7.6 percent year-on-year in the first quarter of 2018, according to the report by Airports Council International (ACI) Europe.

"Istanbul-Atatürk led the league with the passenger growth of 21.5 percent. This propelled the Turkish hub from the fifth to the third position of the busiest European airports, compared to the full year 2017," the report said.

It said that passenger traffic in the top five European airports grew 9.6 percent during January-March.

Commenting on the report, Turkish Minister of Transportation, Maritime Affairs and Communications Ahmet Arslan told Anadolu Agency that Istanbul's Atatürk and Sabiha Gökçen airports, as well as Antalya airport have experienced the highest increase in number of passengers.

"In the first quarter of the year, the number of passengers increased by 21.5 percent in Istanbul's Atatürk Airport, 18.5 percent in, Sabiha Gökçen Airport and 16.5 percent in Antalya Airport compared to the same period of the previous year," Arslan said.

According to the report, Atatürk, Sabiha Gökçen, Antalya, Lisbon and Moscow SVO airports welcomed more than 25 million passengers per year.

Among airports welcoming between 10-25 million passengers per year, Ankara's Esenboğa Airport saw the biggest rise in the number of passengers, with a 41.3 percent increase.

"For now, the most significant downside risks for air traffic are coming from rising oil prices, trade disputes and Brexit," Jankovec added.

"During the month of March, average passenger growth was 8.9 percent, benefiting from the Easter break starting at the end of the month rather than in April," the report said.

ACI Europe also revealed that freight traffic reported an increase of 1.1 percent in the month -- the slowest gain in two years.

The report by the ACI Europe includes 241 airports in total, representing more than 88 percent of European air passenger traffic.