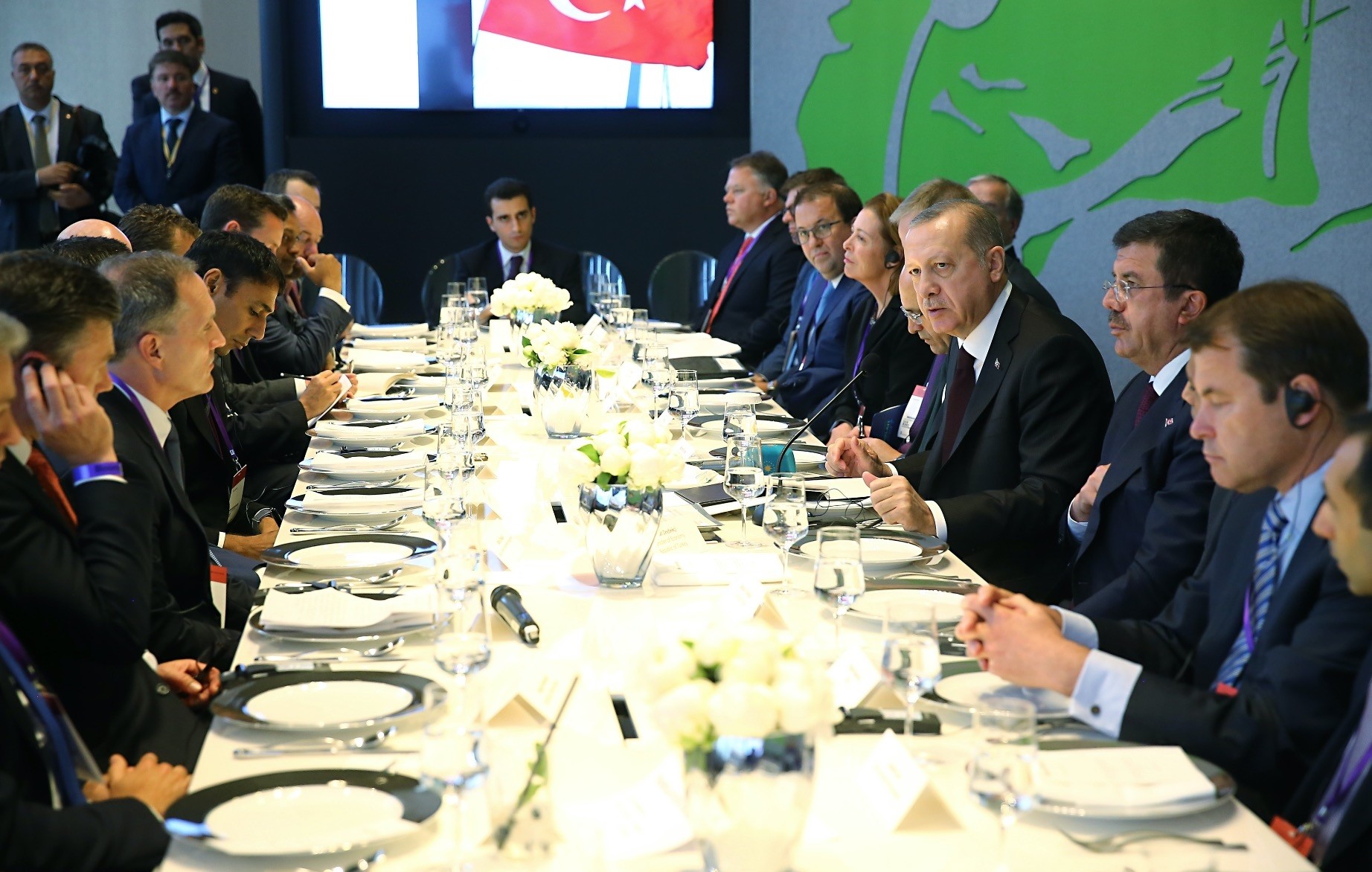 President Recep Tayyip Erdou011fan meets with British investors at a lunch in London yesterday.
by Daily Sabah May 15, 2018 12:00 am

As part of his official visit to the U.K., President Erdoğan addressed the CEOs of leading British firms and explained investment opportunities in the continuously-growing Turkish economy

As part of his three-day visit to the U.K. which began on Sunday, President Recep Tayyip Erdoğan met with members of the British business world that have investments in Turkey or are seeking opportunities in the country at Bloomberg in London. President Erdoğan will also meet with Queen Elizabeth II today and with British Prime Minister May. During his meetings, bilateral relations between the two countries and regional issues will be discussed. Turkish and British officials are also expected to hold delegation and one-on-one meetings.

Signing a new trade agreement between Turkey and U.K. after Brexit and increasing the bilateral trade volume between the two countries to $20 billion will also be addressed during the president's visit.Speaking to the BBC's HARDTalk on late Sunday, Erdoğan elaborated on the bilateral economic relations between the two countries. He said there are good opportunities to further develop trade relations, which currently stands at around $17 billion in the post-Brexit period.

"We are in a preparation about this issue as the leaders of Turkey and the U.K.," he said.

Currently, more than 3,000 firms with U.K. capital operate in the country and the investment amount by British firms has neared $9.9 billion from 2002 to February 2018, according to the data from the Economy Ministry. The share of British investment makes up 6.7 percent of Turkey's total foreign direct investment (FDI) basket.

Besides, Erdoğan said the two countries currently have collaborations in the defense industry and that they will be carry an effort to develop them further.

Speaking at the 7th Turkish-British Tatlıdil Forum on Sunday, the president recalled that bilateral trade volume with the United Kingdom reached $16.2 billion in 2017 and that this year bilateral trade grew by 39 percent in January-March alone, reaching $5 billion.

He pointed out that they aim to reach $20 billion in bilateral trade volume.

"I believe that the potential of the two countries is above this figure. To achieve this goal, investments and joint projects are especially important," Erdoğan said, adding that the United Kingdom has been among the countries with the most investments in Turkey by investing close to $10 billion directly in the country in the last 15 years.

He recalled that the Talıdil Forum was launched in 2011 during his term as prime minister, while he was visiting the U.K. The president said that the function and operational scope of the forum would be further improved in the upcoming period.

"Turkey attributes great importance to its collaboration with the U.K., and the Tatlıdil Forum has made significant contributions to strengthen cooperation between the two countries," he said.

The two countries are working on an important joint defense project to develop and produce Turkey's national jet fighter, the TF-X. During British Prime Minister May's visit to Turkey in January 2017, British defense contractor BAE and Turkey's defense giant Turkish Aerospace Industries (TAI) signed an agreement worth about 100 million pounds. TAI's TF-X is a twin-engine all-weather Turkish aerial superiority fighter jet. The thrust of each motor is said to reach 20,000 pounds. The jet will also be able to reach an altitude of 55,000 feet, while its range will be around 600 miles.

Erdoğan noted that, especially in terms of systems for TAI and the British defense industry, these companies are collaborating on the national fighter jet project designed as the fifth-generation fighter jet.

"Hopefully, we will undertake many more joint projects with strategic priorities in the field of defense industry. As the governments of both Turkey and the U.K., we want our economic cooperation to continue without interruption after Brexit," he continued. Turkey and the U.K. in early August of last year agreed to provide co-financing for various projects and contracts within the scope of an agreement aiming to strengthen commercial cooperation and increasing investment between the two countries.

The U.K. Export Finance Agency (UKEF) and its counterpart in Turkey, Eximbank, signed an agreement with the U.K. government increasing its support for the British companies trading with Turkey.

This cooperation is taking place in an environment where UKEF provides additional resources of 1.7 billion pounds to the UK companies that have exported to Turkey and to Turkish investors who have bought goods and services from the U.K., by doubling its support for exports to Turkey by 3.5 billion pounds. In addition, UKEF financing is now available in Turkish lira as well as in 40 other currencies, and it provides Turkish companies with the convenience of purchasing British products by using their own currencies.

Turk Eximbank General Manager Adnan Yıldırım, who visited the U.K. as part of the Tatlıdil Forum and discussed joint investment opportunities in infrastructure projects in third countries with UKEF CEO Louis Taylor, highlighted that the agreement between Eximbank and UKEF encourages Turkish and British contractors to jointly run infrastructure projects in third countries.

The "Invest in Turkey" forum was held in the U.K. on May 11 with Investment Support and Promotion Agency of Turkey (ISPAT) representatives, credit rating firms, banks as well as Turkish and British investors in attendance.

The event discussed Turkey's mega projects in energy, transportation, healthcare, infrastructure and investment, providing extensive information on the country's latest regulatory framework and incentives. Local and foreign investors including Limak, European Bank for Reconstruction and Development (EBRD), South Korea's Eximbank, Otoyol A.Ş., Rönesans Holding, IC Holding, Astald, and Türkerler Holding shared their experiences as contractors in the country's megaprojects, including the Renewable Energy Resource Zones (YEKA), transport infrastructure and healthcare projects. The forum underlined Turkey's major investments in transport infrastructure projects, which has received over $90 billion in the last decade. The Ministry of Transport, Maritime Affairs and Communication will also invest in around 3,500 projects, including bridges, highways, tunnels, and airport in Turkey.

The forum also highlighted how the country's healthcare sector offers many lucrative opportunities since Health Ministry is planning to develop 31 health campuses with a total bed capacity of 42,000.

ISPAT President A. İhsan Erdem made a presentation on the investment environment in Turkey, which is depicted to be highly attractive thanks to a robust economy, favorable demographics, liberal economic environment, comprehensive incentives, and strategic location providing access to a vast market.