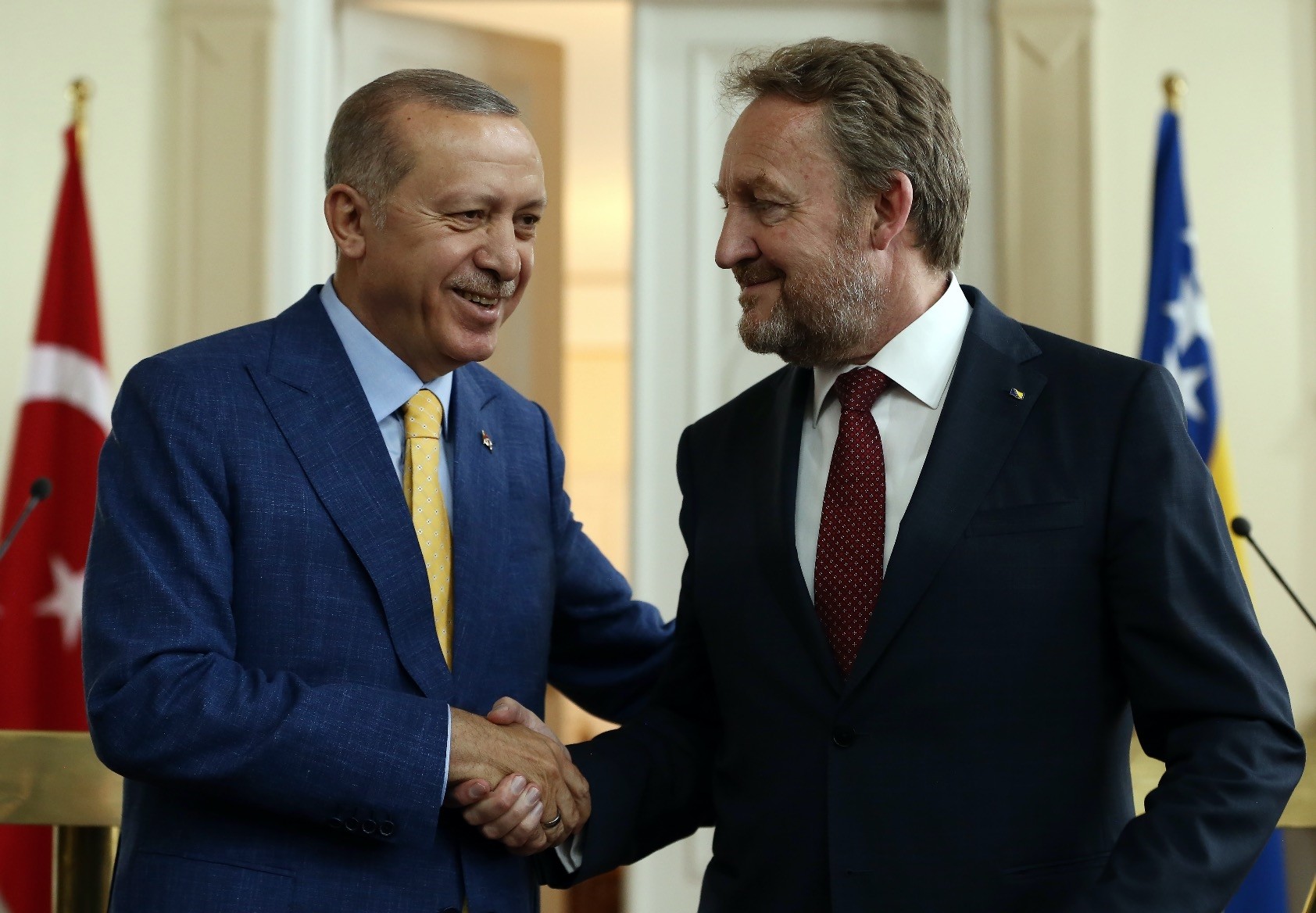 President Erdou011fan (L) shakes hands with Bakir Izetbegovic, the Bosniak member of the tripartite Presidency of Bosnia and Herzegovina, in Sarajevo yesterday.
by daily sabah May 21, 2018 12:00 am

The Belgrade-Sarajevo Highway, planned to be built with the joint initiatives of Turkey, Bosnia-Herzegovina and Serbia with an estimated cost of 3 billion euros, is being seen as a permanent sign of regional peace and stability

The Belgrade-Sarajevo Highway will be the "elixir of regional peace," President Recep Tayyip Erdoğan said yesterday in Sarajevo. Ahead of his rally in Sarajevo where he will meet expat Turks living in Europe, President Erdoğan held a meeting with Bakir Izetbegovic, the Bosniak member of the tripartite Presidency of Bosnia and Herzegovina, and discussed political and economic ties particularly focusing on cooperation in tourism, defense and infrastructure. Speaking at a joint press conference with Izetbegovic, Erdoğan said that the bilateral trade volume between Turkey and Bosnia-Herzegovina will increase to $1 billion in a short period of time as it has seen a fast rise in the recent period.

Turkey's exports to Bosnia-Herzegovina were recorded at $350 million in 2017, according to the data released by the Turkish Exporters' Assembly (TİM) and the bilateral trade volume was nearly $620 million.

President Erdoğan stressed that Turkish firms are encouraged to partake in industry, infrastructure and transportation projects.

He noted that the free trade agreement with Bosnia-Herzegovina will also be expanded; hence boost the bilateral trade volume.

A free trade agreement between Turkey and Bosnia-Herzegovina was signed on July 3, 2002 in Ankara and came into force on July 1, 2003.

The president said Turkish firms should continue their investments in Bosnia and the entire Balkans, particularly in transportation.

"The Belgrade-Sarajevo Highway has an estimate cost of 3 billion euros and Turkey is a partner to the project along with Serbia and Bosnia-Herzegovina. The cost of the project will be partly provided by Eximbank and Turkish contractors will also contribute to the financing of the project," Erdoğan explained.

The most important example of Turkish businesspeople's involvement in the region, he said, is the Belgrade-Sarajevo Highway and it will be an elixir of regional peace and stability once completed.

Bosnian leader İzetbegovic also said that a memorandum of understanding for the tender process of the project was signed yesterday and stressed the Bosnian support for the tripartite mechanism to build the highway.

An agreement in January was reached on the Sarajevo-Belgrade Highway project, planned to be built between Bosnia-Herzegovina's capital of Sarajevo and Serbia's capital of Belgrade with Turkey's support. The highway will be built on the two previously discussed routes.

The project is planned to be built by Turkish firms using domestic labor force through a build-operate-transfer model. The highway is expected to make a major contribution to the development of both economic relations and trade between the two countries, as well as to regional stability.

Although the project was brought up more than two years ago, the relevant authorities could not agree on the route stemming from the duality in Bosnia-Herzegovina's administration, with one side wanting the highway to run through the Tuzla province, while other insisting on the Visegrad province. Consequently, with the support of President Erdoğan, the proposals of both sides have been accepted.

With the construction of the Sarajevo-Zenica-Tuzla-Brcko-Bijeljina-Belgrade route in particular, Tuzla, one of the most important industrial cities of Bosnia-Herzegovina, will be connected to the capital city through a highway after Zenica. Given that there is already a highway between Sarajevo and Zenica, the section extending from Zenica-Tuzla-Brcko-Bijeljina to Serbia's border will be 150 kilometers in length, while the Zagreb-Belgrade highway starting from the border is around 40 kilometers in length.

On the other hand, the second route will pass through Sarajevo, Visegrad, Pozega and Belgrade. Considering that Serbia has already built a highway between Belgrade and Pozega, the remaining part is planned to be about 160 kilometers. The news previously reported by the Serbian media revealed that this route could be built at a cost of around 800 million euros.