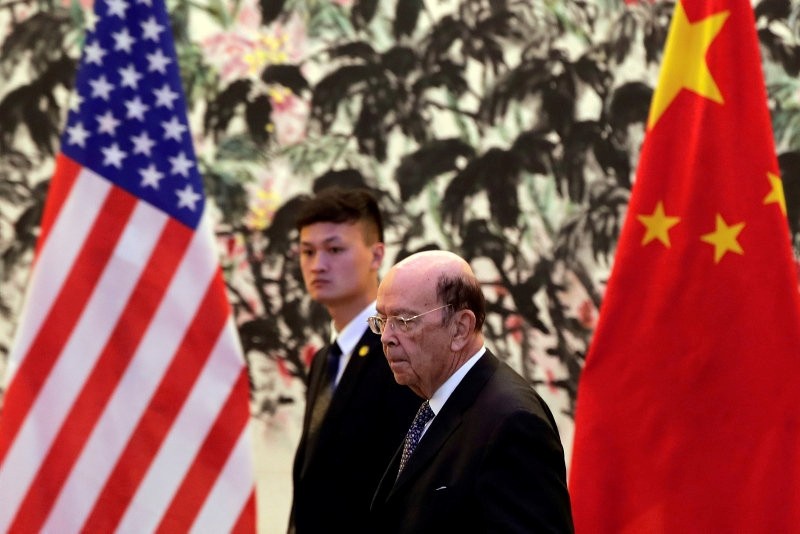 U.S. Commerce Secretary Wilbur Ross arrives to the Diaoyutai State Guesthouse to attend a meeting with Chinese Vice Premier Liu He in Beijing, June 3, 2018. (AP Photo)
by Jun 15, 2018 12:00 am

China will impose additional 25 percent tariffs on 659 U.S. goods worth $50 billion in response to the U.S. announcement that it will levy tariffs on Chinese imports, the Chinese commerce ministry said.

Tariffs on $34 billion of U.S. goods including agricultural products such as soybeans will take effect from July 6, the ministry said. Soybeans are China's biggest import from the United States by value.

The tariffs will also be applied to autos and aquatic products, the ministry said.

The effective date of the tariffs on the remaining $16 billion of U.S. goods will be announced later, according to the commerce ministry. Among the affected $16 billion in U.S. goods include crude oil, natural gas, coal and some refined oil products.

U.S. President Donald Trump announced on Friday 25 percent tariffs on $50 billion of Chinese imports, in a move that looks set to ignite a trade war between the world's two largest economies.

Trump said the tariffs would be imposed on a list of strategically important imports from China. He also vowed further measures if Beijing struck back.

"This is a violation of the legitimate rights and interests that China is entitled to according to WTO rules, and is a threat to China's economic interest and security."