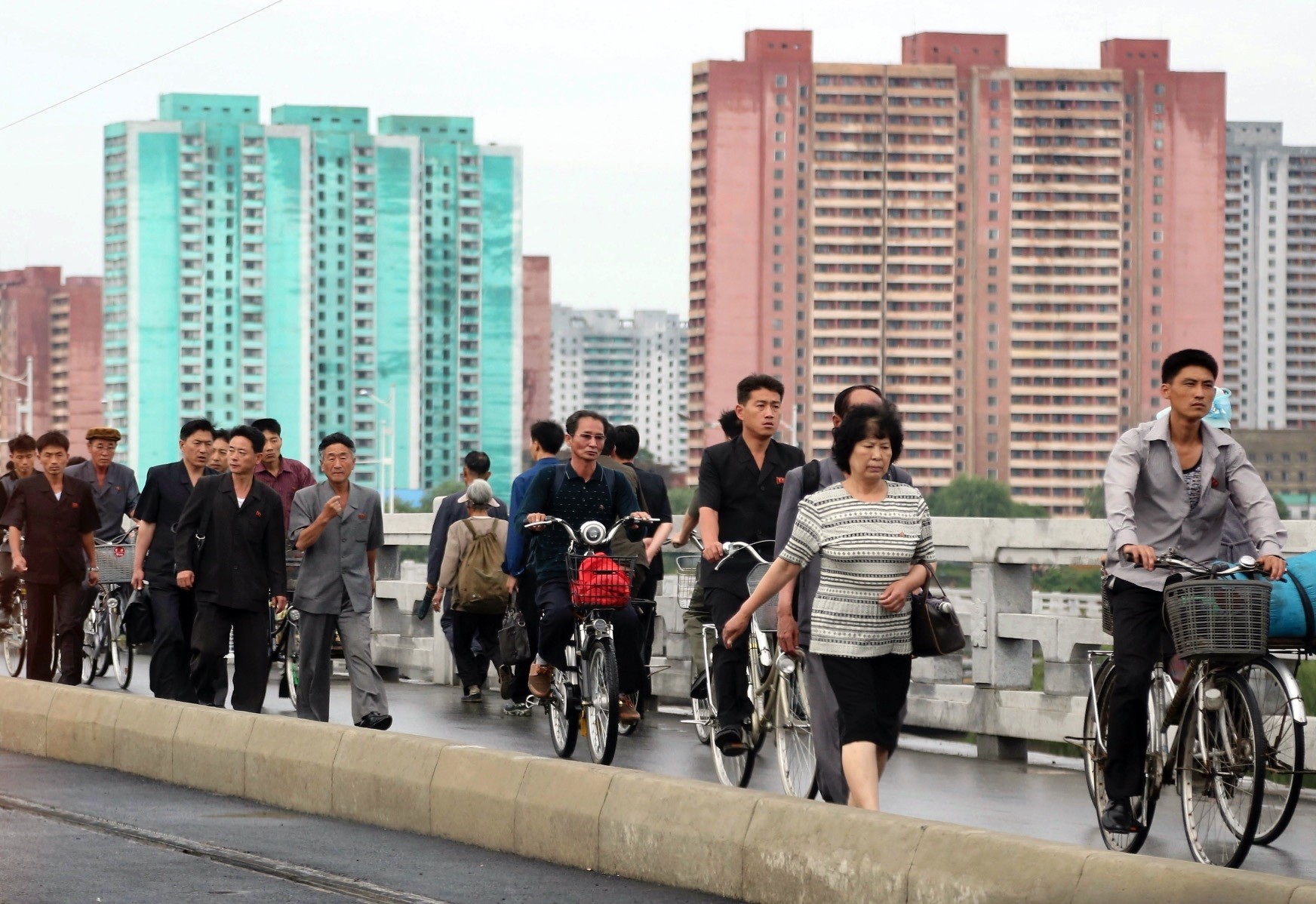 Men and women walk on a bridge as apartment buildings are seen in the background during the morning rush hour in Pyongyang. High rise apartments are a common form of accommodation for people living in the capital city.
by Jun 18, 2018 12:00 am

Donald Trump dangled the carrot of foreign investment in front of North Korean leader Kim Jong Un at their nuclear summit, but analysts say few will want to put money into one of the highest-risk business environments in the world. The U.S. president showed Kim a movie of bright lights, high-speed trains and soaring tower blocks - pitching a future that could be possible if Pyongyang gives up its weapons. Optimists say that with mineral wealth, cheap labour, and a helpful geographical location, the North has huge potential. But the history of overseas firms who have tried to set up operations in the isolated, impoverished country is a long and sorry one.

Rules that can change on a whim, bills that are never paid, and the threat of expropriation hang over foreigners who step into the wildest of wild east investment destinations. For now, dozens of restrictions apply under the various sanctions regimes imposed on the North over its nuclear ambitions. Joint ventures are banned by the UN Security Council, the European Union blocks financial transfers of more than 5,000 euros, and U.S. regulations mean international banks are loath to enable transactions of any kind - so much so that even humanitarian organisations struggle to fund their activities. And even if they are lifted, there are major challenges to working in the North.

Infrastructure is poor, and analysts say corruption is widespread. Crucially, said a diplomatic source in Pyongyang, "legal guarantees for business are very weak". During the Sunshine Policy, a previous period of warmer ties, South Korean conglomerate Hyundai poured hundreds of millions of dollars into a tourist resort for Southerners to visit the scenic Mount Kumgang. But the trips came to an abrupt halt when a North Korean soldier shot dead a woman from the South who strayed into a forbidden zone.

Many South Korean firms set up operations in the joint-venture Kaesong Industrial Complex where they employed cheap labour from the North, but Seoul closed the project in 2016 over Pyongyang's weapons programs. Egyptian telecom firm Orascom poured hundreds of millions of dollars into setting up the North's first mobile phone network, Koryolink, only for the government to set up a rival operator of its own. The company was also unable to get its money out.

"I am taking all the hits," Orascom's billionaire owner Naguib Sawiris told Bloomberg last month. "I am being paid in a currency that doesn't get exchanged very easily, I have put a lot of money and built a hotel and did a lot of good stuff there."

"Governance is weak, information is lacking and there are huge cultural gaps with local partners," said Geoffrey See, founder of Choson Exchange, a non-profit that trains entrepreneurs and economic policymakers in the North. The most successful foreign firms in the North, he added, focus on trading activities to avoid having assets in the country that are vulnerable to seizure. The highly secretive North has been quietly bringing in reforms for several years, allowing private traders to operate in informal markets, giving state-owned enterprises some freedoms to operate, and turning a blind eye to private company operations. The moves are reminiscent of China's "reform and opening" under Deng Xiaoping, which propelled the country from a basketcase to the world's second-largest economy.