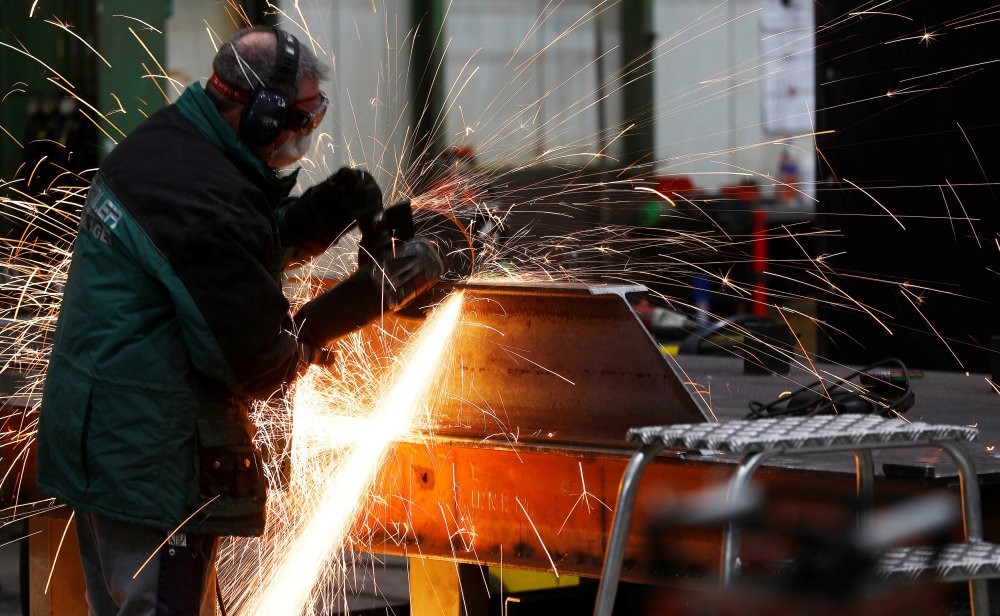 A worker grinds metal at the machine-building company Zemmler Siebanlagen in Massen, Germany.
by Jun 28, 2018 12:00 am

An unusually strong, sustained economic upswing combined with a shortage of people of working age has made German firms more worried about attracting employees than in other leading economies

German companies are so desperate to attract staff that they are falling over themselves to offer perks such as long holidays, shorter hours, flexible shifts and sabbaticals, even though employees here already work the fewest hours in the developed world. Last year, state-owned rail operator Deutsche Bahn, one of the country's biggest employers, offered workers a choice between six days extra annual leave, a 2.6 percent pay rise or a one-hour cut in the working week. Of around 137,000 staff given the choice, 58 percent opted to add more holiday to the 28 to 30 days they already receive; 40 percent went for the pay rise and just 2 percent cut their weekly hours to 38 from the current 39.

"In Germany, the topic of the demographic shift is a big problem," Sigrid Heudorf, head of employment conditions at Deutsche Bahn, told Reuters in an interview.

"We have a big challenge of attracting employees and making them loyal to us," Heudorf said. "We have to think about what employees want."

The preference for more holiday was particularly pronounced among women, who account for just 23 percent of Bahn employees, up from 22 percent in 2012. It is targeting 25 percent by 2020. Germans work fewer hours than most, just 1,363 per worker in 2016, down from 1,452 in 2000, according to the Organisation for Economic Cooperation and Development (OECD). That compares to an average of 1,763 in the 35-member OECD, with U.S. workers putting in 1,783 hours and Mexicans toiling hardest - 2,255 hours a year.

An unusually strong, sustained economic upswing combined with a shortage of people of working age has made German firms more worried about attracting employees than in other leading economies, according to a survey by staffing firm ManpowerGroup.

More than half of German employers are struggling to hire employees versus a global average of 45 percent, with 82 percent of large firms reporting difficulty, the survey showed. The hardest roles to fill are for skilled trades, engineers and in tech.

During a recent visit to Berlin, billionaire German-American venture capitalist Peter Thiel said young people were more interested in going to nightclubs than making their fortunes, joking that the capital offers a "work-life-life-life balance".

That is not quite the case at Deutsche Bahn: its workers put in about 1,600 hours a year, well above the German average. Its standard 39-hour week compares to the 35 hours in the industrial sector at carmakers and engineering firms. After a series of strikes, the IG Metall union that represents 3.9 million workers in that sector agreed a deal this year to allow staff to cut their working week to 28 hours for up to two years to care for children or other relatives.

Meanwhile, Europe's largest telecoms company Deutsche Telekom agreed in April to give workers at its main German operating units 14 days extra days off in lieu of an earlier agreed two-hour reduction in the work week to 36 hours. Vacancies in Germany surged by 128,000 in 2017 to reach 1.18 million in the fourth quarter, a survey by the IAB labour office research institute found. Deutsche Bahn needs to hire 19,000 workers this year to replace a wave of retiring baby boomers. It has already taken on more than 60,000 new employees in the last five years. The recruitment drive must continue for the foreseeable future: 44 percent of its employees are older than 50 and 28 percent are older than 55.