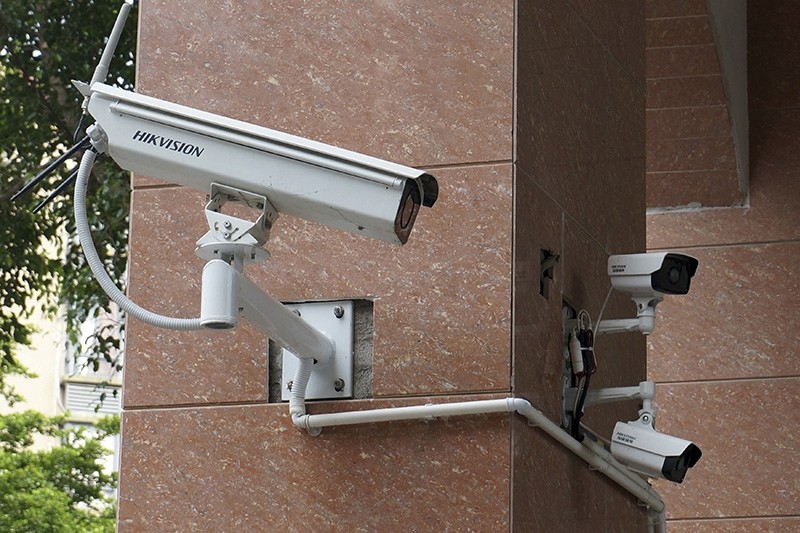 In this July 4, 2018, photo, Hikvision surveillance cameras linked to the local police can be seen at the gateway to a residential block in Fuzhou in southeast China's Fujian province. (AP Photo)
by daily sabah
Jul 06, 2018 12:00 am

China is rolling out its own Black Mirror-like social credit system, which will give or limit privileges – such as traveling by plane or getting hired – to Chinese citizens, and even to foreign companies operating within the country.

According to a new report from the Australian Strategic Policy Institute, the system – made possible through big data, artificial intelligence and a vast network of surveillance – is due to be rolled out in 2020 and will even follow Chinese citizens as they travel internationally.

A citizen's "trustworthiness" score will be determined by their social, political and economic behavior, such as public disturbances or failure to abide by court rulings.

It will also apply to international companies that do business in China. If a company's score is low, perhaps due to an anti-government political stance, it may face fines, higher interest rates for loans and general difficulty operating in the country.

The Chinese government has already successfully intimidated 44 foreign airline companies into changing their stance on Taiwan by threatening to harm the firms' credit records if they did not comply.

Earlier this year, foreign companies obtained 18-digit "unified social credit codes" which, according to the report, will help the government keep track of their actions and dish out appropriate rewards or punishments – including triggering sanctions.

"At its core, the [social credit] system is a tool to control individuals', companies' and other entities' behavior to conform with the policies, directions and will of the (Communist Party of China) CCP. It combines big-data analytic techniques with pervasive data collection to achieve that purpose," one of the report's authors Samantha Hoffman wrote.

The system is currently being tested in several pilot programs and blacklists, which rate both individuals and various other entities.

The credit system – covered in an earlier report by Business Insider, as well – has raised criticism that it interferes with the sovereignty of other nations, namely in the case of the airline companies.