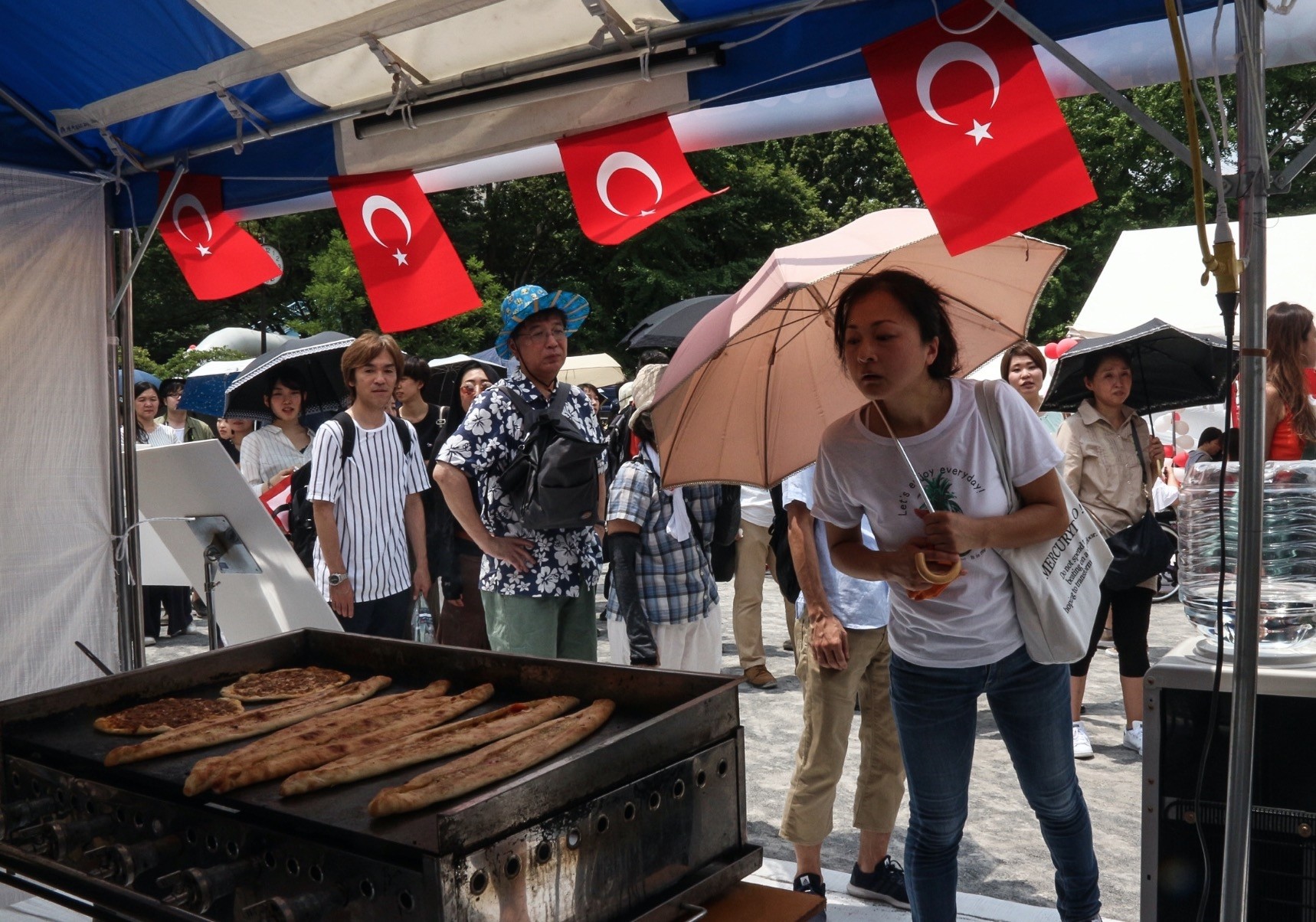 A Japanese woman looks at Turkish pide on display at the Turkish Food Festival in Tokyo, Japan.
by daily sabah
Jul 19, 2018 12:00 am

Seeking to strengthen their brand perception in Japan, some 27 Turkish companies held more than 300 B2B meetings with prominent Japanese food importers during the Turkish Food Festival in Tokyo

Turkey's food companies have held more than 300 bilateral commercial talks with Japanese food importers in the capital of Tokyo. Local exporters are looking to strengthen their brand perception in Japan, said Ali Can Yamanyilmaz, the acting chairman of the Mediterranean Exporters Association (AKİB).

Some 27 members of AKİB, who arrived in Japan's capital of Tokyo on Saturday to attend the Turkish Food Festival, met with Japanese caterers and supermarket representatives.

More than 300 B2B meetings were held during the festival, which hosted 44 prominent Japanese food importers.

Ali Can Yamanyilmaz told the Anadolu Agency (AA) that the food imports of Japan were very high, informing that among Turkey's most-exported food product groups to Japan were fish and aquaculture products, cereals, fresh fruits and vegetables, olive oil, juices and sugar products.

He noted that they organized the Turkish Food Festival in order to introduce the Turkish food products to the Japanese.

"We have examined the food products consumed in Japan in detail. Japan is one of the biggest rice consumers in the world. It is Japanese's strategic food product. Turkish bulgur may replace rice in Japan. They also love Turkish döner kebab," he said.

Speaking of the trade volume between the two countries, Yamanyılmaz noted foreign trade between the two is not balanced. He stressed that the ratio of Turkey's exports to imports from Japan should be increased to 25 percent from its current figure of around 10 percent, noting that they aim to achieve the target in the next two years.

In 2017, Turkey's exports to Japan stood at $411.5 million, versus imports from Japan at $4.3 billion, according to the Turkish Statistical Institute (TurkStat).

"Our aim is to be chosen for our quality, not for our cheap price. So we want to strengthen the image of Turkish goods," Yamanyılmaz noted, adding that they aim to achieve this target with events such as a food festival.

He said challenging markets such as Japan are an important opportunity for Turkish food brands to improve themselves.

He also remarked they want to popularize the dairy products such as cheese, which are not prevalent in the Japanese's culture. The popularization of the Turkish restaurants and food culture should be supported, Yamanyılmaz said.

"Entering challenging markets such as Japan means being able to enter any market in the world," he noted.

"The packaging and presentation of products is as important as the product itself in Japanese markets, which have tight controls and standards," he added.

FTA EXPECTED TO BE SIGNED SOON

"We expect the singing of FTA to be made between Turkey and Japan to take place very soon," he said.

Demir said that Turkish companies are beginning to show more interest in the Japanese market, emphasizing that there is less cultivated land in Japan and the population is gradually decreasing.

Demir also noted that Japan is the second country that invests the most in the world, investing around $125-140 billion abroad every year. He also said the country continuously explores where it can make investments.

"There is an increase in the investments by the Japanese in Turkey. However, the trade volume between the two countries is far below the potential. 40 percent of our exports to Japan are food exports. They have changed their food import regime. Therefore, food exports to the country have become easier."

Japan is set to host 2020 Olympic Games, for which Demir said food needs are expected to increase.

He also said they brought together Turkish business delegation with prominent Japan's food importers and supermarket representatives such as Aeon, Mitsui Foods, Mitsubishi Foods, Itochu Foods and Seven Eleven within the scope of the B2B meetings.