US, EU to hold off on further tariffs as part of trade talks, aim for 'zero' trade barriers 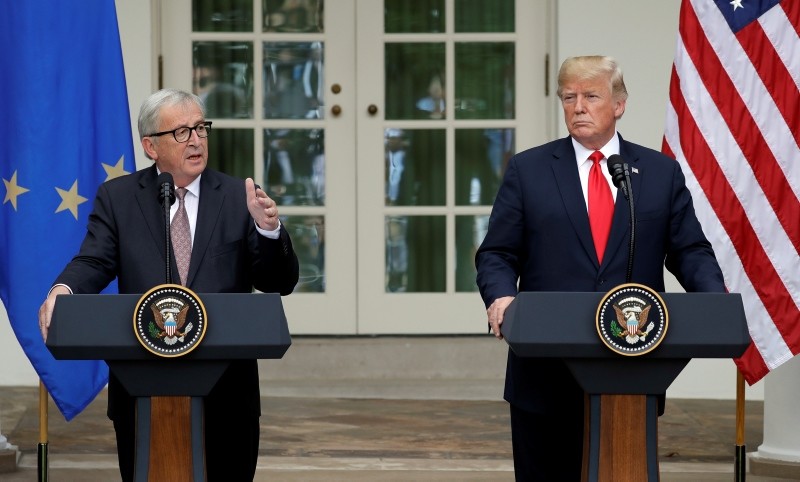 President Donald Trump and European Union leaders announced Wednesday they have agreed to work toward "zero tariffs" and "zero subsidies" on non-automobile goods and would work to resolve U.S. tariffs on steel and aluminum imports that have roiled European markets.

The president, in a hastily called Rose Garden statement with European Commission President Jean-Claude Juncker, said the EU had agreed to buy "a lot of soybeans" and increase its imports of liquefied natural gas from the U.S. Juncker, meanwhile, said the U.S. and EU had agreed to hold off on further tariffs as part of trade talks aimed at averting a crippling trade dispute involving the lucrative automobile market.

Trump told reporters it was a "very big day for free and fair trade" and vowed to "resolve the steel and aluminum tariff issues and we will resolve retaliatory tariffs. We have some tariffs that are retaliatory and that will get resolved as part of what we're doing."

"We're starting the negotiation right now, but we know very much where it's going," Trump said after talks with European counterparts.

As U.S. soybean farmers have struggled against retaliatory tariffs, Juncker said the EU "can import more soybeans from the U.S. and it will be done." He said the two sides also agreed to work together to reform the World Trade Organization, which Trump has vehemently criticized as being unfair to the U.S.

Earlier in the Oval Office, Juncker told Trump that the two trading partners were "allies, not enemies" and said they needed to work together to address recent frictions involving Trump's threats to impose tariffs on auto imports and EU plans to retaliate.

Trump has placed tariffs on imported steel and aluminum, saying they pose a threat to U.S. national security, an argument that the EU and Canada reject. He has also threatened to slap tariffs on imported cars, trucks and auto parts, potentially targeting imports that last year totaled $335 billion.

The president has repeatedly called the EU — which includes many of the U.S.' oldest and most committed allies — an unfair trading partner and even labeled it a "foe."

The European Union has warned that it will retaliate with tariffs on products worth $20 billion if Trump puts duties on cars and auto parts from Europe.