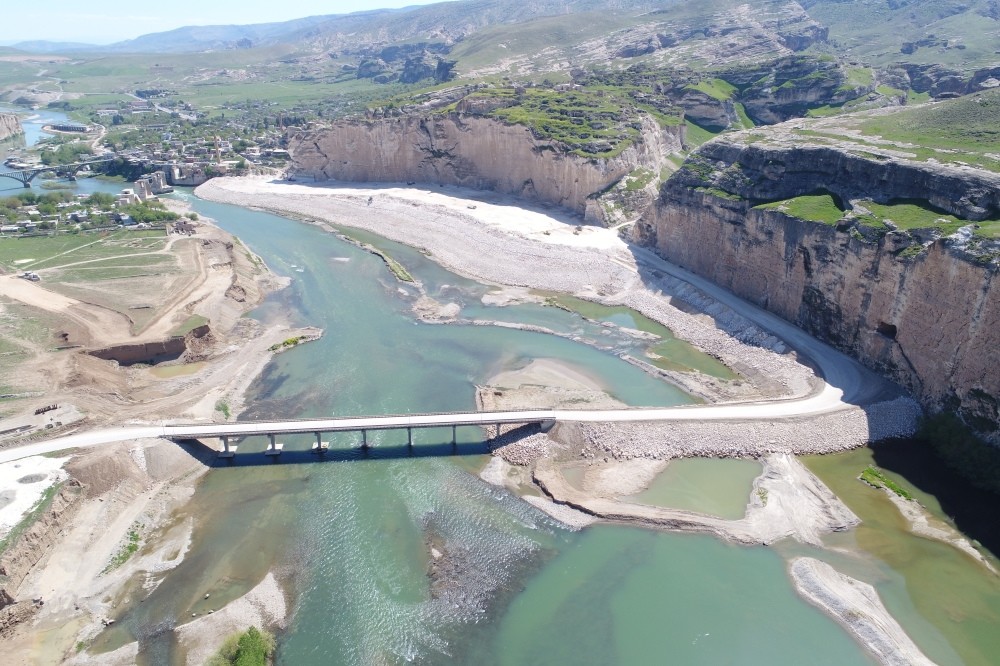 Delaying water-filling operations in the multi-billion dollar Ilu0131su Dam Project, Turkey continues to maintain water flow to its southern neighbor Iraq at 500 cubic meters per second according to a bilateral protocol.
by Daily Sabah Aug 09, 2018 12:00 am

Committed to the principle of equitable, optimal and reasonable sharing of water resources, Turkey maintains the water flow from the Tigris to Iraq, which is plagued by drought due to low precipitation

Earlier this summer, Turkey postponed filling up its massive reservoir for the Ilısu Dam project built on the Tigris River in the southeastern province of Mardin, with an estimated investment cost of TL 12 billion ($2.27 billion), to maintain the water flow into its southern neighbor Iraq. Continuing its decades of water policy since the 1980s, Turkey is strictly committed to its agreement with Iraq to keep the flow of 500 cubic meters of water per second.

Turkey is expected not to start the impounding process until winter, since the drought in Iraq plagued farmers this season in the south of the country and led to violent protests against government policies, which included restrictions on certain crops that demand high amount of water.

Since the beginning of this summer, farmers and citizens in the areas of Salahiya, Mhanawiya and al-Shamiya in Diwaniyah province and Basra province have protested declining water-related services and the Agriculture Ministry's decision to ban the planting of rice, white and yellow corn, sesame, cotton, millet and sunflower seeds.

The people of Iraq have been voicing their frustration with the deteriorating social conditions mainly caused by declining water levels in the Tigris. The reason for these abject conditions by and large stem from the central government's inability to address the problems and people blame the government for failing to modernize how it manages water and irrigation.

Hundreds of millions of dollars in aid and development funding have poured into Iraq since the U.S. invasion in 2003. But living conditions have not seen any major improvement.

With the continuing problem of drought and low precipitation and in the face of the current situation with the political vacuum in Iraq, Turkey's role as the key stabilizing power becomes more significant. Indeed, Turkey needs to continue its cooperative role and institute a regulatory approach for the efficient, equitable and optimal sharing of the water resources in the Euphrates and Tigris Basin.

Although no final agreement has been reached at the international or regional level, apart from a number of protocols, the necessity of ensuring a multilateral cooperation platform where the bordering states share the Euphrates and Tigris is becoming an urgent matter given the worsening hydraulic and climatic conditions.

Within the framework of the Joint Economic Commission protocol Turkey and Iraq agreed to establish a joint committee for the negotiation of transboundary river basin of Tigris and Euphrates in 1980. This joint committee convened 16 times from 1982 to 1992 but the meetings halted due to the Gulf War.

From 1984 onward to 2009, Turkey, Syria and Iraq had negotiated the management of transboundary waters. In 1984, Turkey proposed a three-staged plan for optimal, equitable and reasonable utilization of the transboundary waters of the Euphrates-Tigris basin.

Yet, the plan was rejected by Syria and Iraq since there is a difference in approach to the basin area between the three countries. While Turkey considered the Euphrates-Tigris basin as a whole system, the two others wanted to categorize it as two separate basins during the negotiations after the establishment of Joint Technical Committee (JTC) in 1983.

Turkey has even scientifically proven its stance and even the historical trajectory confirms that the Euphrates-Tigris basin is a single system but the downstream riparians Syria and Iraq insisted on their own solutions. As one of the cradle of civilizations, the Euphrates-Tigris basin has been depicted as the land between the rivers, namely the Mesopotamia, has been historically evaluated as a single transboundary river basin.

After several bilateral and trilateral meetings and provisional agreements, Turkey inked a memorandum of understanding with Iraq and Syria in 2009. The agreement stipulated the monitoring of water resources, joint projects and protocols a

nd fighting climate change while continuing the flow of water 500 cubic meters per second to both Syria and Iraq.

The Iraqi government more specifically has accused Turkey of polluting its waters and weakening its water quality and drying up the Arab marshes to halt the construction of the Ilısu Dam that began in 2006 with the aim of utilizing the Tigris resources as part of GAP.

These accusations moreover have found reflections on the Iraqi public as well. However, the polluted water problem in Iraq, which has been one of the triggers of the protests in the country, does not lie in Turkey's dam projects. Indeed, it has been proven that the cause of desalinization in Iraqi waters stems from the country's poorly managed industrial wastes.

The danger of drying Arab marshes date back to Saddam Hussein's policies that opened large canals to punish the Shiite population and the Madan people, living in the south and east of Iraq during the 1991 uprising. Clearing the area of these marshes to gain tactical advantage during Iran-Iraq war was another method Saddam employed, and later in 1985 a

part of the marshes was also drained for oil exploration.

Moreover, a report published by the Save the Tigris and Marshes Campaign in February 2018 puts forward that the rate of pollution has increased in the past decade, especially from industrial and household discharges dumped into the Tigris River in Baghdad, the capital of Iraq and the administrative, industrial and population center of the country. Particularly the Medical City and the Daura Refinery are identified the main causes of pollution in the river.

"More than 2,000 private and government-run factories in Baghdad dispose of their waste directly into the river. Facilities of the Ministry of Oil, which include refineries, are the major source of pollution here," the report read.

It argues that the Medical City, a complex of hospitals, is a prime example of pollution caused by the public service sector in Baghdad. Furthermore, the industrial discharge from the Daura Refinery, located in the southeast part of Baghdad, has been identified to contain highly toxic nitrogen, sulfur, oil and grease. This mixes with sewage water from the discharged waste and causes clogging of drainage pipes and impacts the health of aquatic species.

Shedding light on the deteriorating water condition in Iraq, Glada Lahn, a senior research fellow, Energy, Environment and Resources (EER) at Chatham House, told Daily Sabah that the lower part of the Euphrates for instance has lost at least 40 percent of its flow over the last 40 years.

"The water situation is so acute that animals die from drinking the saline and polluted water in that lower part of the river, it has caused mass displacement in addition to exacerbating food price inflation – last winter, there wasn't enough water to plant the wheat crop and many farms have been abandoned," she said.