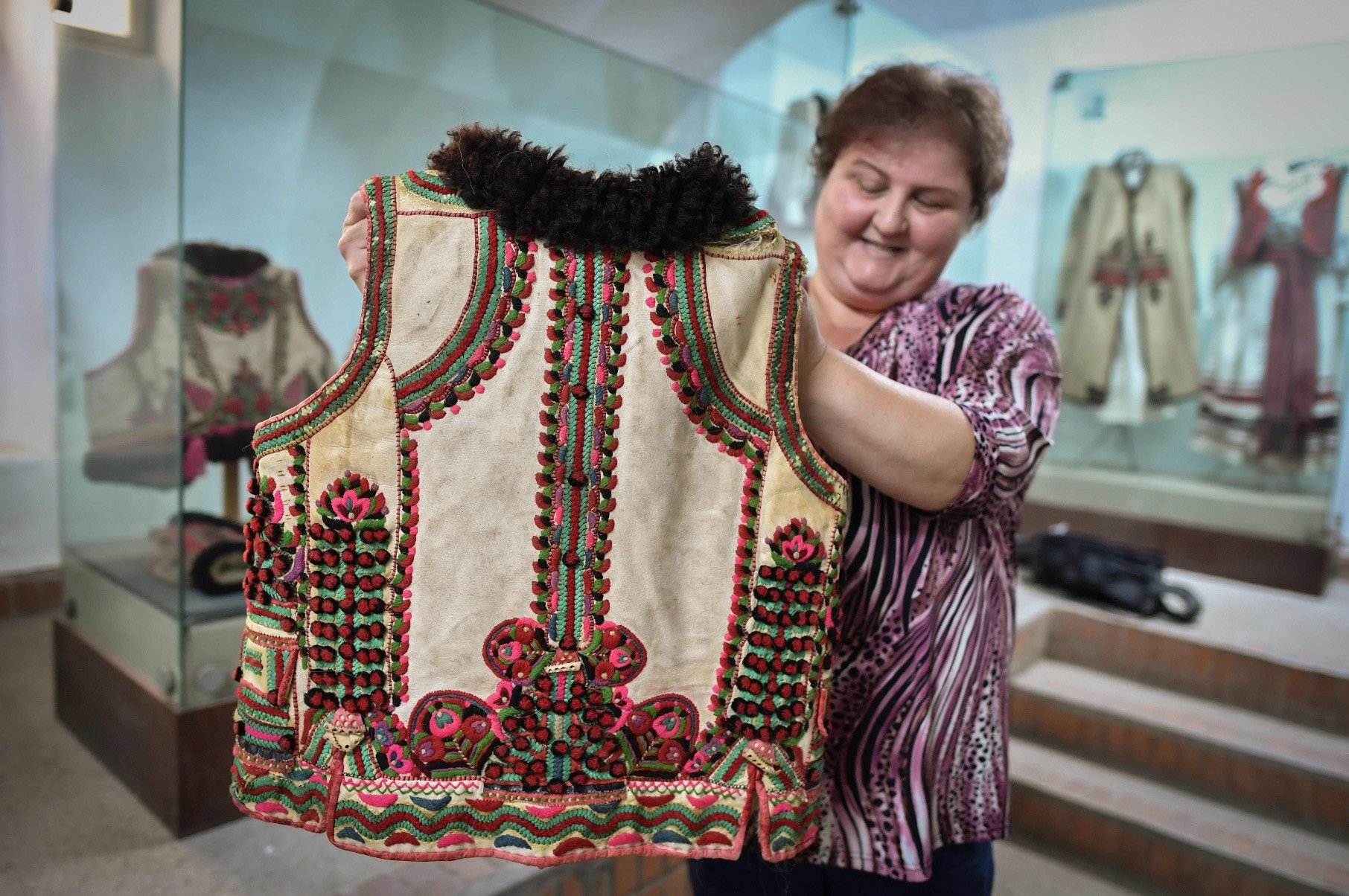 A woman working at the local museum shows a 100 year-old traditional outfit from the Bihor northwestern region of Romania in Beius, July 17.
by Aug 13, 2018 12:00 am

They may feel aggrieved at not obtaining an official seal of approval, but traditional Romanian dressmakers are riding a wave of demand for their folk designs after a top fashion house inadvertently showcased their craft. Clothes makers from the northwestern Bihor region were more than a little bemused when they got wind of a 2017 Dior collection.

Their jaws notably dropped when they saw an embroidered folk coat which looked strikingly similar to the "cojocel binsenesc" waistcoat their region has been producing for around a century. A Romanian version of the garment, historically worn on important occasions, sells at home and abroad for around 500 euros ($580) - almost a month's salary in one of the European Union's poorest countries. The Dior coat did not go unnoticed among the wider population either, after a resident of the regional city of Beius spotted it in a Singapore shop and posted it on Facebook, sparking a strong response from users which was picked up by the media.

"That day, I posted my first comment on Facebook, thanking the Dior fashion house for appreciating this beautiful item," Dorina Hanza, a 52-year-old embroiderer who cottoned on to the similarity, told AFP. La Blouse Roumaine, which promotes the Romanian blouse to encourage women to wear it, juxtaposed the different versions side by side on Twitter, adding #givecredit. Yet Dior, which did not respond to AFP's requests for comment, may well have done the Bihor designers a favour. Demand has soared since the social media posts pointing out the similarities between both versions of the heavily embroidered, multicolour, sheepskin sleeveless jacket with black fur edging.

"Since then, everybody wants one" from the traditional source, enthused Ana Florea, who runs a designers' group in Beius, near the Hungarian border.

"This waistcoat is 100 percent ours," she insisted.

Hanza, while happy to see the Romanian version in the limelight, said she just wished Dior could have given a nod to their apparent inspiration. "They could have said, 'we borrowed this from the Romanian people'," said Hanza, adding "the tradition might have been lost" had the current controversy not emerged. Diana Naprodean, 44, also sees an upside to the Dior garment.

"That proves it's really pretty," said the librarian, a hobbyist crocheter and embroiderer who has just produced her own first attempt at the traditional waistcoat.

"Thanks Dior. Thanks to you we have begun to love our traditional costume again," said Diana Herdelo, 33, another from the Beius group who is weaving one of her own.

The waistcoat is made from local Bihor sheepskin after a tanning process of around three weeks. It is then tailored and decorated with local style embroidery and worn by both men and women, although the length and motifs differ. With traditional regional costumes being worn by fewer and fewer people, demand for the clothes had almost died out until the controversy over the Dior jacket reignited interest. One important detail on the Dior version did not escape the notice of Bihor residents though - the jacket worn by the fashion model was adorned with motifs -- a phallic symbol -- strictly worn only by men.

"Tradition doesn't allow a woman to wear a man's cojocel or the other way around," Hanza said. With interest piqued, Romania's Beau Monde magazine and the McCann advertising agency have launched an ad campaign entitled Bihor Couture, along with a website where fans can order a jacket and other traditional items. The site has already taken around 1,000 orders.

"Our goal is to help people in this region and showcase their work and their traditions which were in danger of dying out," says Beau Monde's former editor-in-chief Roxana Dobrita.