A Syrian's journey from Gitmo to pastry business 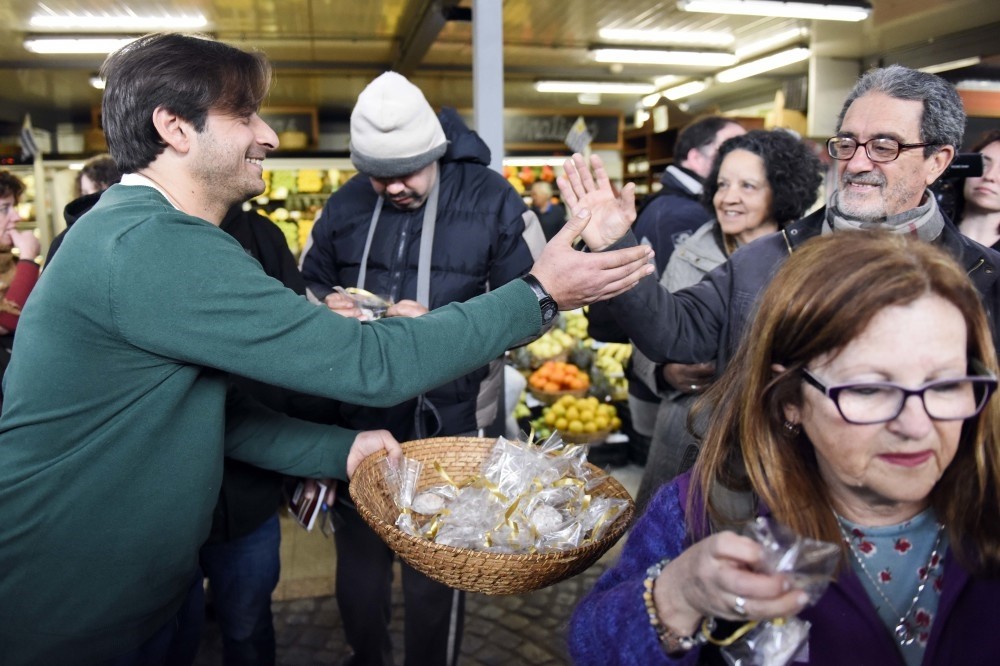 Syrian Ahmed Ahjam hands out samples of his work at the opening of his Middle Eastern pastry shop at the Mercado Agricola in Montevideo, Uruguay, Aug. 13.
by Aug 16, 2018 12:00 am

Ahmed Ahjam spent more than 12 years in the Guantanamo Bay prison on suspicion of terrorism, but now he has seen a dream come true by starting a business in the country that welcomed him when his nightmare ended.

Ahjam, 41 and born in the northern Syrian city of Aleppo, arrived here in 2014 along with six other prisoners from Guantanamo under an accord signed by the United States and Uruguay. Washington was seeking countries willing to accept such inmates so it could move to empty the facility for terror suspects that was notorious for mistreating prisoners. Ahjam was one of the roughly 780 people sent to Guantanamo prison since 2002. His stand has small chalkboards advertising some of his wares: baklava, the sesame paste tahini and also Uruguayan-style candy. Ahjam now aims to make a new life in Uruguay thanks to this undertaking he began by selling his treats on Facebook.

"For me it is a dream come true. It is very important in my new life. I am very grateful to the Uruguayans who are close to me. I am going to work very hard," Ahjam told reporters as he inaugurated his stand. He declined to take questions.

U.S. Department of Defense officials allege he fought U.S. and Coalition forces in the Tora Bora mountain cave complex in Afghanistan used by late Al-Qaeda leader Osama Bin Laden. He fled bombardment before being captured by Pakistani authorities. According to Department of Defense records, he was handed over to U.S. authorities in the Afghan city of Kandahar in January 2002 and incarcerated at Guantanamo from June 14, 2002. Many of the assertions in the records are contested by former Guantanamo detainees and their lawyers and cannot be independently verified.

His story is a success story that comes out of an integration initiative that has had its ups and downs here. Uruguay took in the Guantanamo prisoners in exchange for economic aid that grows smaller and smaller over time. These men had trouble integrating into Uruguayan society and finding work. One of them left several times, only to come back, until he managed to depart definitively this year. But Ahjam seeks just the opposite: he wants to remain in the country that welcomed him.

"It is highly symbolic that someone who is a refugee finds an alternative way to live, a productive thing to do. Everyone deserves an opportunity," said Montevideo mayor Daniel Martinez, who was at the opening of the food stand. Ahjam's store, which also serves coffee and fruit juices, is located in the Montevideo Farmers Market, which used to be a wholesale venue but underwent a makeover to feature food stands, cultural exhibits and shops. His project was developed with help from a city agency called Cedel.

"In Syria he was a jeweler. These are different markets and times now, and in wanting to live in Uruguay and develop himself here, he thinks the cuisine of his country could be a way to make a living," said Veronica de Gregorio, who runs one of the departments at Cedel.