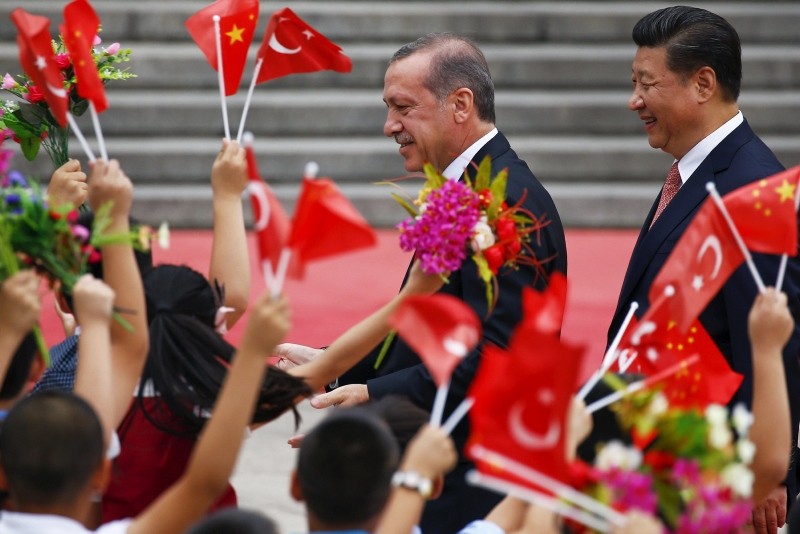 President Recep Tayyip Erdou011fan (L) and his Chinese counterpart Xi Jinping greet children waving their country's national flags during a welcoming ceremony outside the Great Hall of the People in Beijing July 29, 2015. (Reuters Photo)
by Aug 17, 2018 12:00 am

China offered support to Turkey on Friday as Ankara reeled from a currency crisis and U.S. sanctions, saying it believed the country could overcome its "temporary" economic difficulties, in Beijing's first comment on the issue.

In a brief statement, China's Foreign Ministry said that it had noted the "new direction" of the Turkish economy and its foreign relations.

"Turkey is an important emerging market country, and it remaining stable and developing benefits regional peace and stability," the ministry added.

"China believes that Turkey has the ability to overcome the temporary economic difficulties, and hopes the relevant sides can ease their differences via dialogue," it said, referring to Turkey and the United States.

The ministry also referred to media reports that state-run Industrial and Commercial Bank of China Ltd had signed a $3.8 billion financing agreement with Turkey - an apparent reference to a Chinese state media report.

State news agency Xinhua reported last month that the Turkish unit of ICBC had signed a $3.8 billion deal at a forum in Ankara, though did not give details.

On Friday, the Foreign Ministry said China has always supported business and finance cooperation between the countries and the signing of deals in accordance with market rules.

An ICBC spokesman said on Friday that at its Turkish unit had signed memorandums of understanding for cooperation on infrastructure, but declined to comment on the figure of $3.8 billion.

The Turkish lira has lost a third of its value against the U.S. dollar this year as worsening relations between the NATO allies Turkey and the United States added to losses driven by concerns over monetary policy and economic conditions.

China and Turkey have developed increasingly close ties since putting behind them a dispute over China's treatment of ethnic Uighurs, a Muslim people who speak a Turkic language and live in China's far western region of Xinjiang.