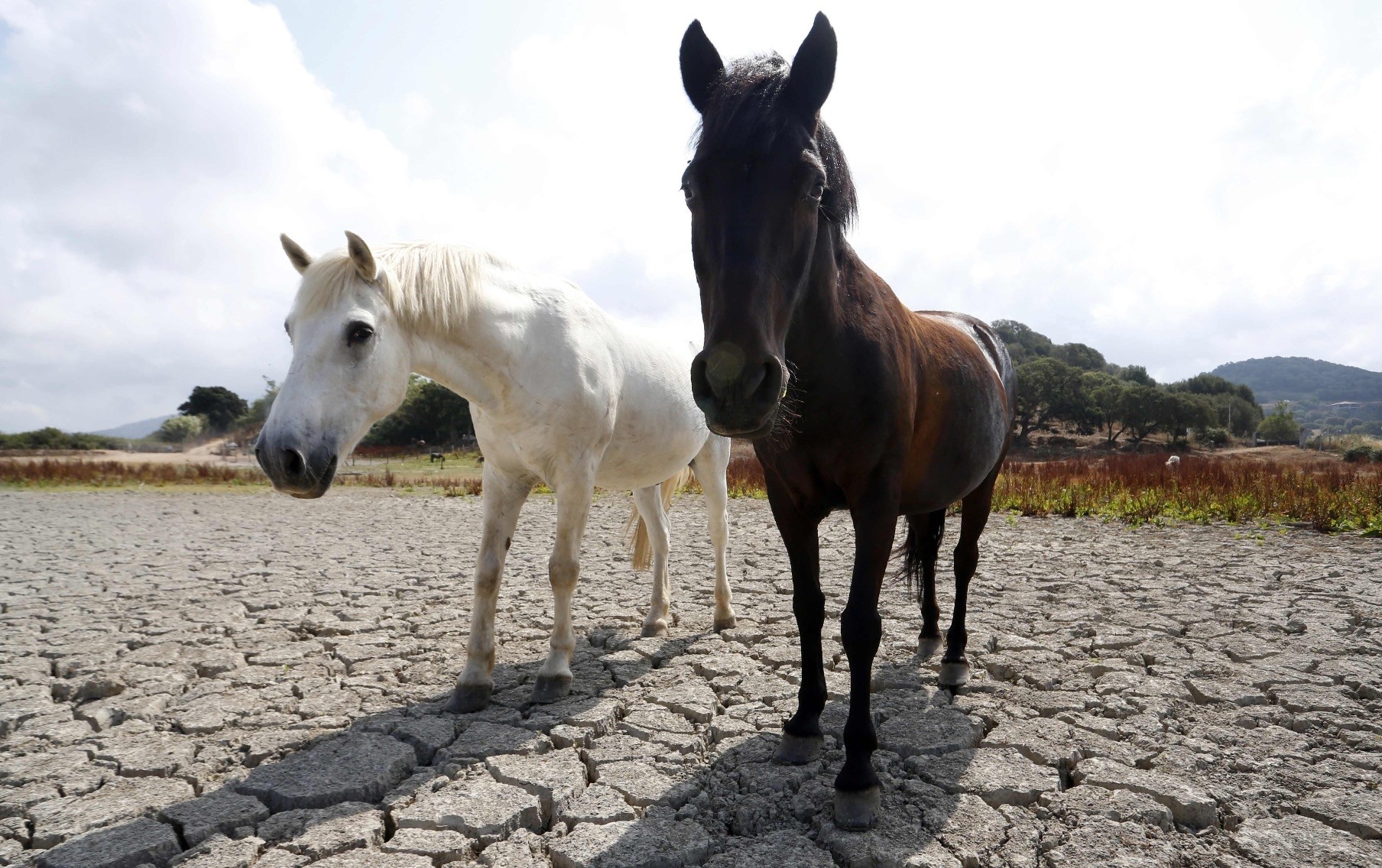 Horses stand on a dry field in Bastelicaccia, a few kilometers from Ajaccio, on the French Mediterranean island of Corsica.The drought during the summer of 2018 has taken a toll among the northern European countries, which produce milk.
by Aug 27, 2018 12:00 am

Much of Europe is wondering how they will feed their animals this winter. The region confronts a widespread drought that could see farmers having to send much of their herds to slaughter

"Our cows have been living off hay cut in June, there isn't any grass," says Jean-Guillaume Hannequin, a farmer in eastern France, who like his counterparts across much of northern Europe is wondering how he will feed his animals this winter. Mediterranean countries long ago adapted their farming practices to little rain, but this year it is the north of Europe confronting a widespread drought that could see farmers having to send much of their herds to slaughter due to a lack of feed. In Sweden, where swathes of territory were burned by wildfires this summer as the country baked under century-high temperatures, the grain harvest is expected to be down around 30 percent and it is unclear whether recent cooler temperatures will allow farmers to take in more hay.

"The feed shortage will be felt this coming winter," Harald Svensson, chief economist for the Swedish Board of Agriculture, told Agence France-Presse (AFP), explaining that "most farmers have relied on their winter feed reserves during the drought this summer."

The situation is similar in Germany, where officials say one in 25 farms is at risk of going out of business. In Lower Saxony, a key region for growing fodder crops, the harvest is expected to be more than 40 percent down from normal years.

In the Netherlands, the deficit for fodder is estimated to be 40 to 60 percent, according to the agricultural association, with the deficit for grain at 20 percent. The English countryside is far from its normal undulating green this year, having not seen a drought like this in 80 years, according to the official Agriculture and Horticulture Development Board (AHDB). Milk production is down sharply due to a lack of hay.

In France, "the east has been suffering since the beginning of July, and the rest of the country since August with an extended heatwave," said Patrick Benezit of the FNSEA umbrella group of French farmers' unions.

"In many places, even in the Massif Central, the 'water tower' of France, there won't be a second cutting of hay, this is really worrying," he told AFP. Benezit also criticized the price gouging for straw.

"Farmers need to buy straw to mix with hay to feed their animals, and the traders are profiting from the situation" by asking for up to 100 euros ($116) per ton, he said, when straw sold for between 60 and 80 euros last year. As prices for fodder and hay climb higher, farmers are sending animals to the slaughterhouse earlier than usual. In Britain, the number of cattle slaughtered jumped by 18 percent in July, with dairy cows making up a large portion, according to the AHDB.

In Germany, where the government has unlocked emergency aid for farmers, there was a 10 percent increase in animals slaughtered in the first two weeks of July, according to authorities. The Swedish government has responded by pledging 1.2 billion kronor ($135 million) in aid for farmers to buy fodder and avoid sending their animals to the slaughterhouse. French farmers are concerned due to the monopoly on slaughterhouses by the Bigard group. The situation is dire for dairy farmers, who have already been complaining that they are not being paid enough for their milk to survive.

"The winter risks being catastrophic," said another French farmer. "To complement the rations of the animals we are going to have to buy grain, the price of which went up this summer, so milk will become more expensive to produce." The European Commission has promised exceptional aid to farmers, like speeding up aid payments and allowing farmers to cut hay from fallow land. But French farmer Hannequin is not optimistic.

"There are going to be a massive number of farms abandoned," he warned.