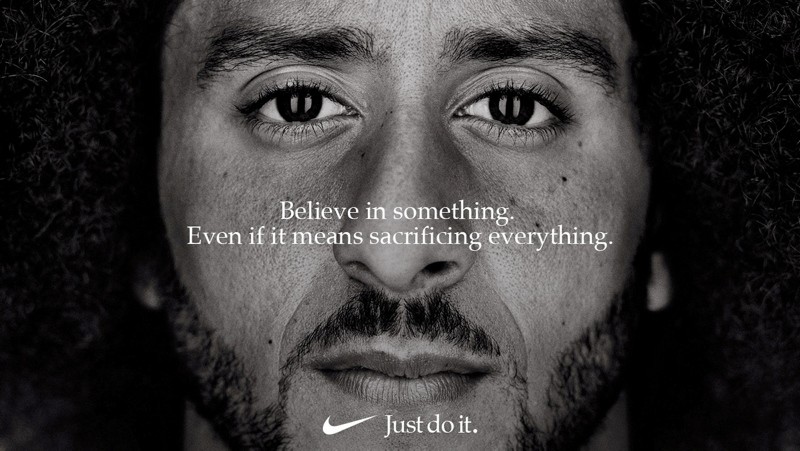 Former San Francisco quarterback Colin Kaepernick appears as a face of Nike Inc ad in this image released by Nike in Beaverton, Oregon, U.S., September 4, 2018. (Nike/Handout via REUTERS)
by Compiled from Wire Services Sep 04, 2018 12:00 am

Dow member Nike fell 2.9 percent to $79.78 in mid-morning trading, the first session following news that former San Francisco 49ers quarterback Kaepernick would be featured in Nike's campaign to mark the 30th anniversary of the "Just Do It" slogan.

Kaepernick, who triggered a political firestorm after kneeling during the U.S. national anthem in 2016 to protest racial injustice, has not played in the NFL since early last year.

Nike's move prompted immediate calls for boycotts from some consumers. Protesters on social media called for people to burn their Nike sneakers.

Kaepernick will be one of several faces for a campaign marking the 30th anniversary of Nike's "Just Do It" slogan. He has been sponsored by Nike since 2011 but has reportedly negotiated a new deal with the U.S. brand that will include a signature shoe and apparel.

President Donald Trump has been critical of athletes taking a knee during the national anthem and has said he would love to see NFL owners fire football players who disrespect the American flag. But Kapernick's cause was taken up by other NFL players last season, who launched protests.

Nike is just the latest sports brand to face boycott calls, which industry analysts said can alienate some customers, while winning over others, but often blow over quickly.

"Nike is not a stranger for backing sporting personalities who take views and act on them. Politicizing sport is likely to result in polarizing demographics," said John Guy, an analyst at Mainfirst Bank in London.

"Freedom of speech is one of America's core tenants, so placing this freedom within a sporting context for a brand as big as Nike will always make headlines," he added.

Under Armour faced criticism last year after its chief executive made comments supporting Trump, while Adidas drew calls in May to cut its ties to rapper Kanye West after he described slavery as a choice and praised Trump.

The customers Nike could lose will be more than made up for by attracting new younger consumers who are looking to buy brands that stand behind political topics, said Jessica Ramirez, a retail analyst with Jane Hali & Associates.

Noting the fleeting effect of calls for boycotts of Under Armour and Adidas, she added: "We don't hear much about it today."

Over 30,000 people were tweeting with the hashtag #NikeBoycott on Tuesday morning, making it among the top trending topics on Twitter. Some posted images of themselves burning and ripping their Nike shoes and apparel.

Others edited the ad to show images of U.S. army veterans with the same caption, criticizing Nike for signing the athlete and saying it disrespected the memory of fallen soldiers.

Still, there were a large number of other users who responded positively to Nike taking a stand on social issues.

Even former Iranian President Mahmoud Ahmadinejad weighed in, tweeting: "The #NFL season will start this week, unfortunately once again @Kaepernick7 is not on a NFL roster. Even though he is one of the best Quarterbacks in the league."

Some analysts said the boycott would not have a big impact on Nike, which in June reported a major sales rebound in its North America business and forecast strong growth for 2019.

"The alt-right calls for a Nike boycott will fail just like the boycott of Dick's Sporting Goods failed," said Matt Powell, a senior adviser with market research firm NPD Group. "Old angry white guys are not a core demographic for Nike."

Gun rights supporters called for the boycott of Dick's Sporting Goods earlier this year after the retailer stopped selling assault rifles and high-capacity magazines following a massacre at a Florida high school in February.

Another analyst, GlobalData Retail's Neil Saunders, said the campaign will harm Nike in middle America, where it is battling Germany's Adidas for dominance in the sneaker market.

"The company's stand may go down well on its native West Coast; it will be far less welcome in many other locations," he said.

But other analysts said the ads could boost Nike's standing with core consumers, including minorities and millennials.

Nike, which confirmed on Monday that Kaepernick was part of the campaign and called him "one of the inspirational athletes of his generation", did not immediately respond to requests for comment on Tuesday.