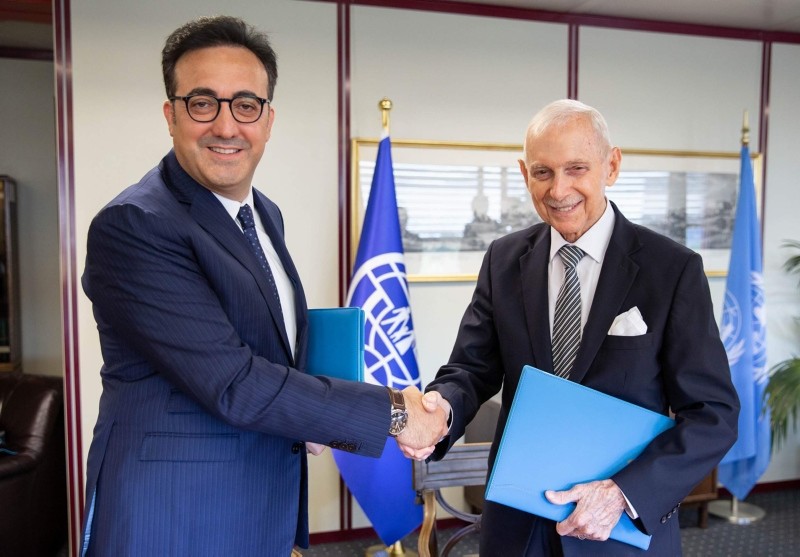 Working with a proactive approach with its flight network and fleet in all areas of operation in an attempt to provide flights to as many destinations as possible in the world, Turkish Airlines (THY) also maintains its pioneering position in social responsibility awareness.

With a view to support safe and regular migration, Turkish Airlines signed a long-term partnership agreement with the International Organization for Migration (IOM) of the United Nations, which operates in areas such as supporting legal immigration options, helping with voluntary repatriation, immigrant health, money transfers and the placement of refugees in other countries.

The deal was signed at IOM headquarters in Geneva by IOM Director General William Swing and Turkish Airlines Board of Directors and Executive Committee Chairman İlker Aycı. The cooperation will initially focus on the "MigApp," which provides applicable and practical information on services offered to immigrants around the world through the widespread use of telecommunication technology.

Speaking at the signing ceremony, William Swing said that the agreement creates a range of opportunities both in terms of the social responsibility awareness that Turkish Airlines has on a global scale and the commitments IOM has made regarding immigrants and refugees. "This important cooperation is also an ideal partnership that will enable us to do much more in educating immigrants, encouraging immigrant rights, and making airline authorities sensitive to human smuggling and trafficking, which is one of the most terrible crimes of our time," he added.

İlker Aycı expressed pleasure in strengthening the existing collaboration with IOM and the national flag carrier of Turkey, which is a leader and model nation in global social responsibility by extending a helping hand to mistreated communities in the world, saying, "Through this agreement, we aim to encourage the ideas of free and legal travel and living peacefully together [as] stipulated by the United Nations Sustainable Development Goals, with solid and down-to-earth formulas."

The agreement is aimed at more effective cooperation in awareness-raising campaigns on safe travel in the countries of origin, including the possible training of Turkish Airlines staff and their partners regarding the prevention of migrant trafficking and cross-border support and documentation.

Within the scope of other future cooperation projects to be implemented by IOM and Turkish Airlines, other works on immigrant health, including travel health assistance and pre-departure health screening services, will also be undertaken. Turkish Airlines is also expected to support this year's "Global Migration Film Festival," which will feature IOM's presentation of 870 films and will be released in more than 100 countries from November to December.

The agreement, which is in line with the United Nations' Sustainable Development Goals, adopts a need for safer and more orderly migration. While addressing risks and challenges facing individuals and communities in countries of origin, transit countries and destinations, the agreement underlines the need for a collaborative approach to optimize the overall benefits of migration in the future as part of the Global Migration Act.

Having been implemented as part of IOM's transition to digital mobility in December 2017, MigApp aims to provide immigrants with visa, health and travel regulations, warnings of global events stemming from conflicts or natural disasters and struggle against intense information pollution about migration by providing information in English on world-wide hotlines on human trafficking. The May 2018 update of the application also includes French, Spanish and Arabic language options.

For instance, immigrants traveling from South Africa, Nepal, Pakistan and Egypt to the U.K., Australia, Canada and the U.S. and making automatic payments, can now book their medical appointments via MigApp.