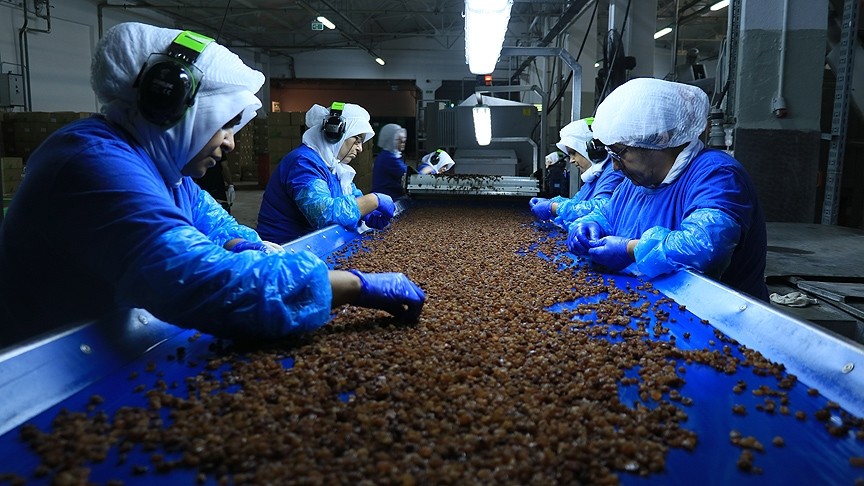 The export of organic "school raisins" from the Aegean lowlands to the U.K. is increasing rapidly as shipments of seedless raisins prepared in 14-gram packages for the lunch boxes of primary school children in the U.K. have started at organic dried fruit processing plants in the Kemalpaşa district of İzmir.

Mehmet Ali Işık, the chairman of the board of directors of Işık Tarım, which exports organic agricultural products to European countries, and the vice president of the Association of Aegean Dry Fruits and Products Exporters, told Anadolu Agency (AA) that Europe's demand for organic products continues to increase rapidly.

Indicating that Turkey will produce 250,000 tons of seedless raisins this year and export 20,000-25,000 tons of them as organic, Işık said grapes are an input for the food industry and have been preferred in the direct consumption market recently.

Underlining that dry fruit is quickly gaining popularity in the health food sector with the recent move away from sugary foods around the world, Işık noted that packaging has also changed in order to appeal to children.

Işık further stated that Turkey exports nearly 80,000 tons of raisins to the U.K. and prepares special packaging for kid consumption there, saying: "Because of the full-time schooling in the U.K., parents have to put milk, bread and fruit in the lunch boxes of their children who go to elementary school. Dry fruit is preferred because it is more convenient to carry in the box. Primary school children absolutely must have dried fruit in their lunch boxes. In addition to raisins, lunch boxes often also include a mix of dried apples, figs and apricots. Some 25-30 percent of organic raisins exported to this country are being offered for sale in small packages in markets. At least 10 percent of this is for children. This year, we will be exporting nearly 1,500 tons of products to be consumed at schools alone."

He pointed out that, as in the U.S. and European countries, both producers and consumers are taking an interest in organic products in Turkey in recent years. He said they have visited producers engaged in organic production who founded exemplary gardens and offered them purchase guarantees, adding that, on occasion, producers come to them and express their interest in producing organic products, as well. "Our farmers now believe in the benefits of organic agriculture. They don't only look at the price consumers pay but also to make sustainable, healthy ecological production on their land," he added.

According to Işık, on the consumption side, packaged organic products have started to show up in markets, and production will increase as demand increases. There is a 20-25 percent difference in price between organic products and the others; however, organic products are not actually more expensive. For conventional products, the yield is increased with artificial fertilizers and pesticides, thus reducing the cost of the products. When everything is factored in, the actual price of products is the same as their organic counterparts.

Recalling that Turkish schools have been distributing raisins to students through a government program recently, Işık noted that this is very positive in terms of improving raisin consumption. "We hope the program will use organic grapes in the future," he added.