Turkey's cooperation with Kazakhstan to broaden after new set of deals 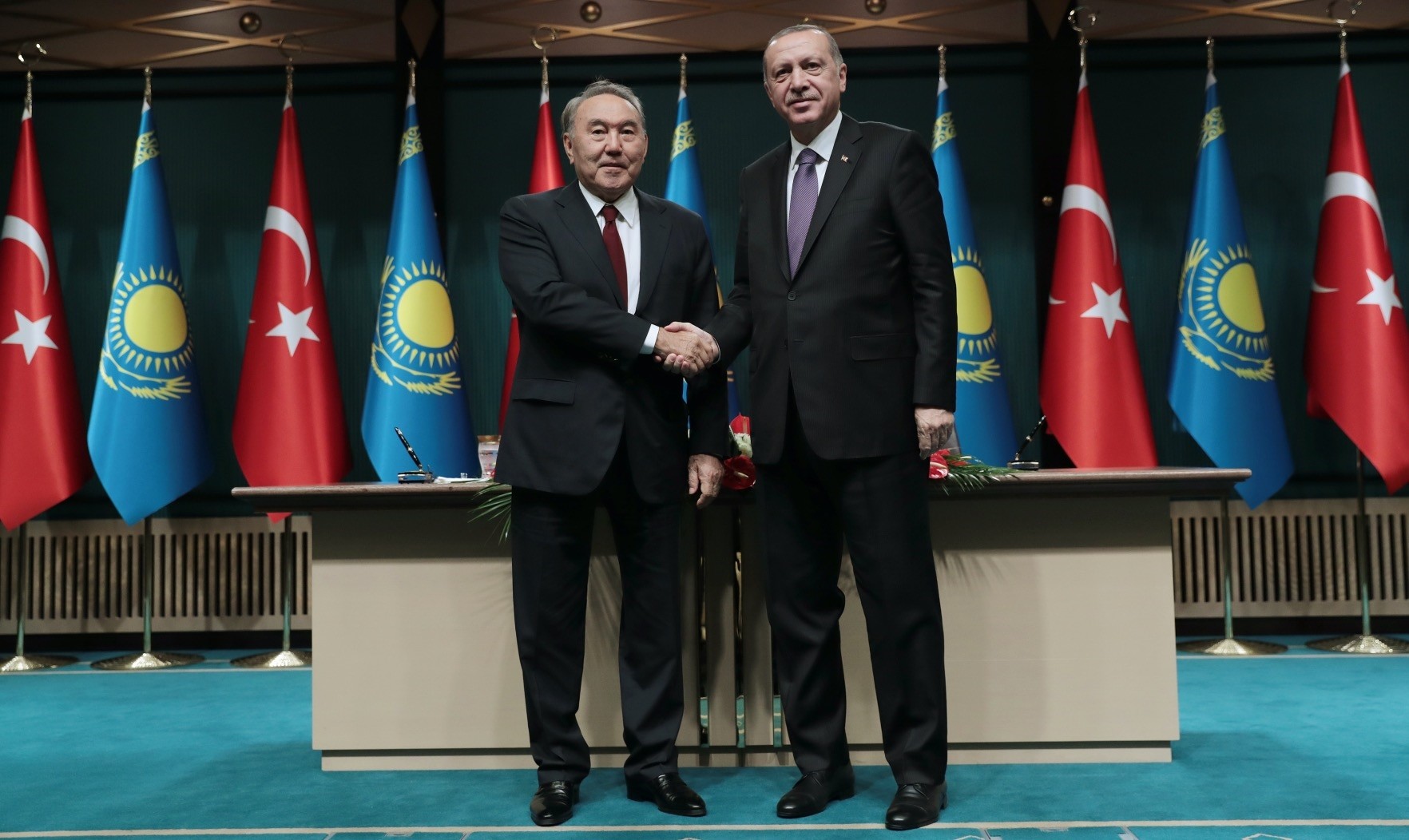 President Erdoğan and Kazakh President Nazarbayev expressed their commitment to improve bilateral cooperation in every aspect, particularly in economy, trade and defense

President Recep Tayyip Erdoğan met his Kazakh counterpart Nursultan Nazarbayev, who is in Turkey on a state visit, in Ankara yesterday. They held a one-to-one meeting, and also attended an inter-delegation meeting and a High-Level Strategic Council Meeting at the Presidential Complex. The two leaders also held a joint press conference, where both stressed the need for further cooperation and reciprocal investments between Turkey and Kazakhstan. The two leaders signed a cooperation agreement prior to the joint press conference.

In his speech, Erdoğan recalled that he met President Nazarbayev on Sept. 3 at the 6th Summit of the Turkish Council in Kyrgyzstan. He added that during the one-to-one and inter-delegation talks, they had the opportunity to sincerely evaluate all the issues on their agenda.

He said that the meetings were productive and five agreement documents were concluded between the two countries.

Erdoğan said that during the Turkey-Kazakhstan Investment Forum in Ankara Wednesday, more than 20 documents of agreement, worth approximately $2 billion, were signed between the relevant institutions and private sector firms of the two countries.

He added that they will intensify efforts to improve Turkey and Kazakhstan relations in every field.

"We have once again affirmed our commitment to contribute to the projects of the Turkish Council as well as our bilateral cooperation with Kazakhstan," he said. "We had the opportunity to deal with the other topics on our bilateral agenda, including the fields of economy, trade, defense, culture and education."

"I believe that we can continue to improve our bilateral tie, which is based on deep-rooted history, and keep growing stronger in the future," he added.

Kazakhstan's President Nazarbayev, on the other hand, noted that they signed deals worth $2 billion during his visit.

"I am pleased with this cooperation. Our first goal is to expand the relations between the two countries. We are prepared to take this alliance even farther," he said.

He congratulated Erdoğan for adopting the Presidential System and wished Turkey success on behalf of all Kazakh citizens.

Nazarbayev said they will strive for further cooperation between the two countries. "I have discussed some important issues with President Erdoğan. We will pay close attention to more cooperation. It will grow steadily. I to see the development of this alliance," he added.

He recalled that the trade volume between the two countries stood at $1.9 billion last year, and said that they were aiming to raise this figure to $5 billion in the near future.

"Our projects on this issue are in progress. We will also develop technological cooperation. We also talked about reciprocal investments between the two countries," he said.

Prior to the joint press conference, Erdoğan and Nazarbayev joined the signing ceremony of the agreements inked between the two countries.

Speaking at the investment forum, Energy and Natural Resources Minister Dönmez said they intend to increase the trade volume between Turkey and Kazakhstan to $5 billion in a few years and then to $10 billion.

"Today, we will witness the signing of 22 agreements, including 18 commercial deals, between Turkey and Kazakhstan, worth $1.7 billion. With the visit of President Nazarbayev, we would like to move our partnership to the next stage by adding and updating the contracts with new projects and further enriching the areas covered by the agreements. Our action plan aims to shed light on our investors' plans for Kazakhstan," he added.

Turkey's energy minister stated that even though the trade volume, which entered a downward trend in 2013 and afterward, showed an increase of 23 percent in 2017, it is well below its potential. He recalled that in 2017, the two countries reached a trade volume of $2.4 billion, while he also pointed to an increase in the first seven months of 2018 compared to the same period last year.

Dönmez said that the Turkish investments in Kazakhstan reached $3.2 billion and that after Russia and China, Turkey comes third in the number of foreign shareholding companies in Kazakhstan.

He also said Turkish contractors have so far reached about $25 billion in investment in approximately 487 prestigious projects including airports, energy and copper facilities, roads, bridges, expo fair construction and an artificial island.