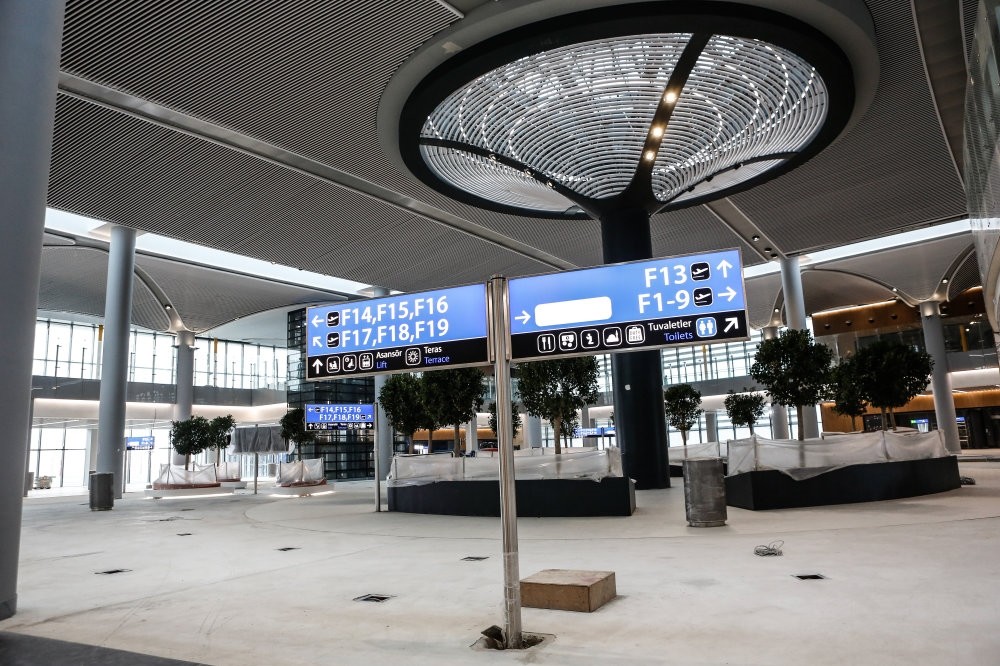 Istanbul New Airport is set to officially open with a grand ceremony on Oct. 29, the 95th anniversary of the Republic of Turkey.
by Daily Sabah with AA Sep 25, 2018 12:00 am

The final flight controls have been completed at Istanbul's third airport, set to be one of the largest airports in the world. Scheduled to open on Oct. 29 with a grand ceremony, the first light will take place on Oct. 31

The final preparations at Istanbul's new airport are coming to an end as it is due to officially open next month. Flight control tests of the Instrument Landing System (ILS) were completed at Istanbul New Airport to ensure that aircraft can make a trouble-free landing even in severe weather conditions in which ground visibility completely disappears, according to the Transport and Infrastructure Minister Cahit Turhan. Turhan was quoted by the Anadolu Agency (AA) yesterday as saying that Istanbul New Airport, which will be one of the largest in the world, will be put into service in a grand ceremony to be attended by President Recep Tayyip Erdoğan on Oct. 29.

The work at the airport is continuing at a great pace, Transport and Infrastructure Minister Turhan said.

In a news conference on Sunday ahead of his visit to New York for the U.N. General Assembly, President Erdoğan put an end to the recent rumors that there would be a delay in the official opening of the new airport, saying that the tests were carried out during the Turkey's first aerospace and technology festival Teknofest on Sept. 20-23 and that it will open as scheduled on Oct. 29, the 95th anniversary of the Republic of Turkey.

Istanbul New Airport, the third in the city, will replace Atatürk International Airport as the main flight hub in country's most populated city.

Explaining that the airport will be completed in four phases, Minister Turhan noted that first phase consists of a main terminal building with an annual capacity of 90 million passengers, a main air traffic control tower, two runways - one 3.75-kilometers and another 4.1-kilometers-long - in the north-south direction where 60-meter wide A380 aircraft can land, a parking area capable of holding 347 aircraft, including 114 approaching to the main terminal, airport support facilities providing hangars, a cargo warehouse, catering and ground services and a parking garage with a capacity of 18,000 vehicles.

Turhan stressed that tests on four ILSs installed on all the runways to be opened in the first phase of the new airport were completed with flight control aircraft and laboratory facilities belonging to the General Directorate of State Airports Authority (DHMİ).

ILS, which allows aircraft to approach and land safely in foggy, rainy and snowy weather where the cloud ceiling is low and the ground visibility is limited, will serve in the "CAT III" category at Istanbul New Airport. ILS enables aircraft to automatically land on the runway through horizontal and vertical guidance and allows for a comfortable approach and landing as well as safety when visibility is high.

According to Turhan, the system in question will enable pilots to approach and land safely, even when visibility is limited or zero due to fog, clouds or rain. All the navigation aids, radar and communication systems of the airport under DHMİ's responsibility are also operational.

Istanbul New Airport will have an annual passenger capacity of 150 million once the last expansion stage is complete but could eventually be expanded to handle 200 million annual passengers in the coming years.

The transfer of major flight operations from Atatürk to the new airport is expected to take place within 48 hours after the inauguration ceremony.

It was recently reported that the National Geographic was in touch with national flag carrier Turkish Airlines (THY) officials to cover the massive relocation process.

THY plans to not to fly for at least the first 18 hours of the transition that will see 5,000 trucks carrying equipment heading to the new airport from Atatürk, which will be used for small-scale aviation operations once the transition is completed. The airliner will make the first flight from the new airport to the capital Ankara on Oct. 31 at 2 p.m., THY Chairman İlker Aycı announced last month. The first overseas flights will be made to the Turkish Republic of Northern Cyprus and Azerbaijan, he noted.

The airport, one of the many megaprojects of the ruling Justice and Development Party (AK Party) to raise Turkey's profile and boost the economy, will accommodate 3,500 takeoffs and landings per day.

It will have some 100,000 square meters of floor space, an overall parking capacity of 25,000 vehicles, 143 boarding bridges, a 42-kilometer baggage handling system and cargo capacity for 5.5 million tons. It is expected to generate more than $15 billion in revenue for the Turkish economy and create more than 225,000 jobs.