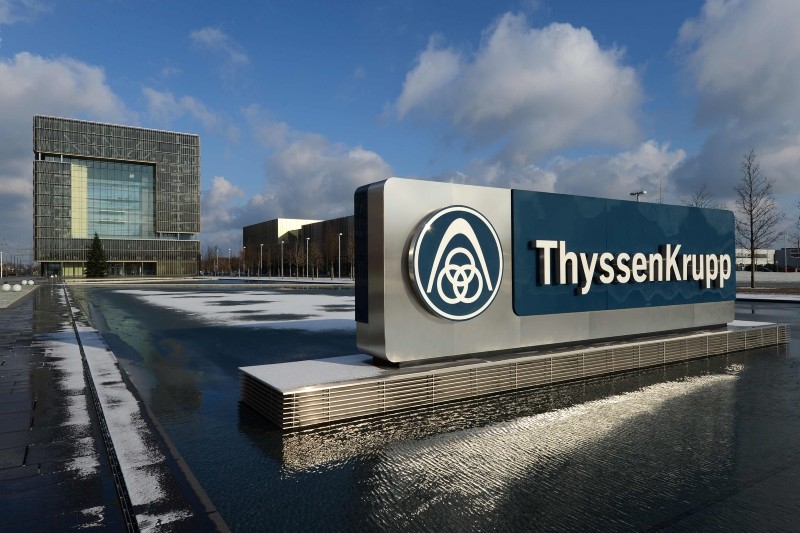 In this file photo taken on December 11, 2012 a general view of the headquarters of German heavy industry giant ThyssenKrupp AG is taken in Essen, western Germany. (AFP Photo)
by Compiled from Wire Services Sep 27, 2018 12:00 am

Following a leadership crisis drawn out over months, the German industrial giant Thyssenkrupp announced plans on Thursday to split itself into two independent businesses.

The aim is to have "two more focussed and more productive companies," Thyssenkrupp's leadership said. The new concept is to be recommended to the executive board by the supervisory board during a Sunday meeting.

The company, based in the western city of Essen, is plagued by its weak plant engineering division as well as an incomplete fusion with India's Tata Steel.

"The industrial goods and the raw materials businesses will each become independent, listed companies," it added.

Shareholders in the present Thyssenkrupp would receive new shares in both Thyssenkrupp Materials -- with 90,000 employees and annual revenues around 16 billion euros ($18.7 billion) -- and Thyssenkrupp Industrials, with 40,000 workers and 18 billion in revenue.

The former is to include the company's raw materials and naval shipbuilding activities, while the latter is to hold on to elevator-building and car components.

But before the plan can go ahead both the supervisory board and a general shareholders' meeting must give the green light, with directors expecting to move "in 12 to 18 months".

The company lost its top two executives in July after a decision to spin off its steel division, sending the company into crisis.

In August, Thyssenkrupp posted a net loss of 131 million euros (152 million dollars) for the third quarter of 2018, compared to a 254-million-euro net gain in the same period last year.

Thyssenkrupp has come under increasing pressure during talks on merging the company's steel unit with Tata Steel from major shareholders, including US hedge fund Elliott and Swedish fund Cevian Capital. They have urged greater speed in reforming the company.

Cevian, which is also represented on the supervisory board, is the second-largest shareholder with a stake of 18 per cent.

The steel merger was announced at the end of June after more than two years of negotiations. If approved, it will create Europe's second-largest steel producer, with 48,000 employees. It would fall under "Thyssenkrupp Materials AG.