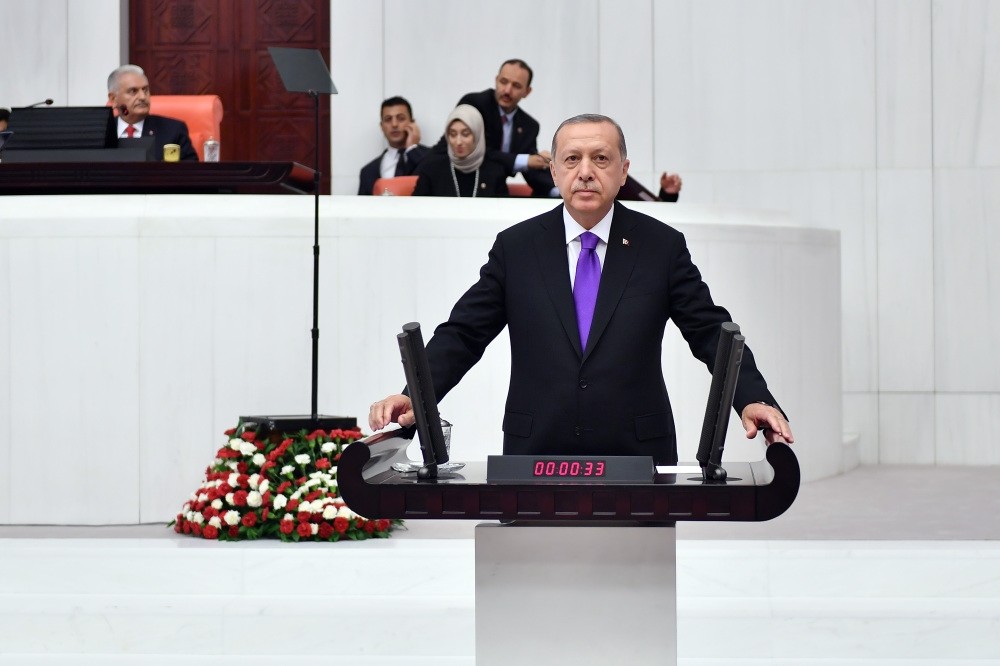 After a period of turbulence in August, the Turkish economy has entered an era of rebalancing with multifaceted measures of coordinated economic actors. Without compromising fiscal discipline and free market principles, the country aims to attract more foreign investment as well as reap the benefits of the measures taken so far

The measures included the promotion of the use of the Turkish lira in any contracts between Turkish citizens, steps to ensure fiscal discipline, limiting swap operations, supporting debt management of the private sector and its reverberations in the banks and rate hikes by the central bank.

These measures have been taken in accordance with the principles of the free market, an iterative pledge highly stressed by President Recep Tayyip Erdoğan and Treasury and Finance Minister Berat Albayrak. The president stressed that Turkey will not compromise from budgetary discipline and sustain full compliance with free market principles while aiming to boost foreign investment flow.

In a speech at the opening of Parliament, Erdoğan said uncertainty caused by fluctuations in the lira – which slumped 37 percent against the dollar this year – were slowly fading but Turkey would closely monitor problems caused by inflation and interest rates.

"We are very strict with budget discipline. We are taking all the necessary steps to strengthen the outlook for our country in the international markets," Erdoğan said.

The Central Bank of the Republic of Turkey (CBRT) raised interest rates by 625 points on Sept. 13, a decision that supported Turkish assets. The lira gained nearly 2 percent yesterday and was trading at 5.94 per dollar yesterday afternoon. The president emphatically stated that the events do not reflect the macroeconomic fundamentals of the Turkish economy, and Turkey is on the verge of overcoming what he described as attacks on the economy, with expansive measures taken. Referring to U.S. President Donald Trump's tweets openly targeting the Turkish economy, Erdoğan said: "The U.S. administration has resorted to threats and blackmail instead of resolving political and legal problems by way of dialogue. This method, which supposedly aims to cost Turkey, gives the greatest harm to the U.S. in the mid and long run. The U.S. administration, which has launched a trade war with China and European Union (EU), has lost its credibility."

"Turkey's situation sets a bad precedent for the United States; so much so that no country in the world can view the future of its relations with the United States with confidence. The Turkish economy is sufficiently resilient to withstand such threats and attacks," the president added. The adverse policies of the U.S. administration, Erdoğan added, spilled over to the economy. For example, he cited, the Halkbank case as an unprecedented case of lawlessness. "We are determined to fight within the law and diplomatically against this twisted understanding that imposes sanctions on our country by using, as an excuse, a pastor who is on trial because of his dark relations with terrorist organizations," the president added.

The row between Turkey and the U.S. escalated when Trump decided to impose sanctions on Turkish ministers Süleyman Soylu and Abdülhamit Gül on Aug. 1. The U.S. also increased tariffs on imported steel from Turkey by 50 percent and aluminum by 20 percent on Aug. 10, in an open attack against the Turkish economy, while threatening the country with more sanctions over Pastor Andrew Brunson. The pastor is under house arrest in Turkey on charges of links to the Gülenist Terror Group (FETÖ) and the PKK, a U.S.-designated armed terrorist organization. In retaliation, Turkey increased the tariffs on certain U.S. goods by up to 100 percent and more.

AIM IS TO DRAWN INVESTMENTS

"Turkey does not ask for money from anyone; all of our efforts are concentrated on receiving international investments in our country," Erdoğan continued, and further stated: "We provide all kinds of support and guarantees for this purpose. We diligently implement programs in many areas, ranging from finance to investments, for a balanced economy. The New Economic Program (NEP) is one of the most important steps in this direction." The president emphasized that the government closely follows the difficulties caused by inflation, interest rates and the exchange rate encountered by anyone running businesses on a daily basis. We prepared a new economic program that seeks to address the balance, discipline and transformation in the economy," Erdoğan noted, and added: "We are determined to ensure the rise of Turkey again through an economic approach that focuses on expanding and facilitating loans, promoting investments and prioritizing production, employment and exports. I ask for some more patience from our nation. Have confidence in our country and its government."

"The process of recreating a balance in our economy has begun as a result of the measures we have taken, the meetings we held and the programs we developed," Erdoğan said.

Erdoğan and Treasury and Finance Minister Berat Albayrak pursued intense economic and financial diplomacy during the president's recent trips to the U.S. and Germany.

In his speech at the 9th Turkey Investment Conference in New York, Erdoğan reiterated that Turkey will continue to strengthen the investment environment without compromising on the rules of the free market economy. "We will continue to make the necessary legal arrangements to attract more direct investments and for international investors to invest safely in our country," he said. He also said Turkey and the U.S. will overcome the current "turbulent period" in their relations through their strategic partnership. During his visit to Germany, Erdoğan received senior representatives of Germany's largest companies and banks.

During the meeting, the president underlined that those who have invested in Turkey have always won, and that international investors will continue to win. Senior executives of German companies spoke of their investment plans in Turkey and asked for Erdoğan's support on these plans. On the other hand, Albayrak held meetings with the largest U.S. investment companies, including Stone Harbor, Alliance Bernstein, Massachusetts Financial Services, Neuberger Berman, Wellington Management, NWI Management, Lazard, PGIM and Invesco, and banking giants such as Citibank, JP Morgan and Goldman Sachs. In his speech at the meeting, Albayrak provided information about Turkey's NEP, which was announced on Sept. 20, stating that after the June 24 elections, monetary and fiscal policies have been implemented with stronger coordination.