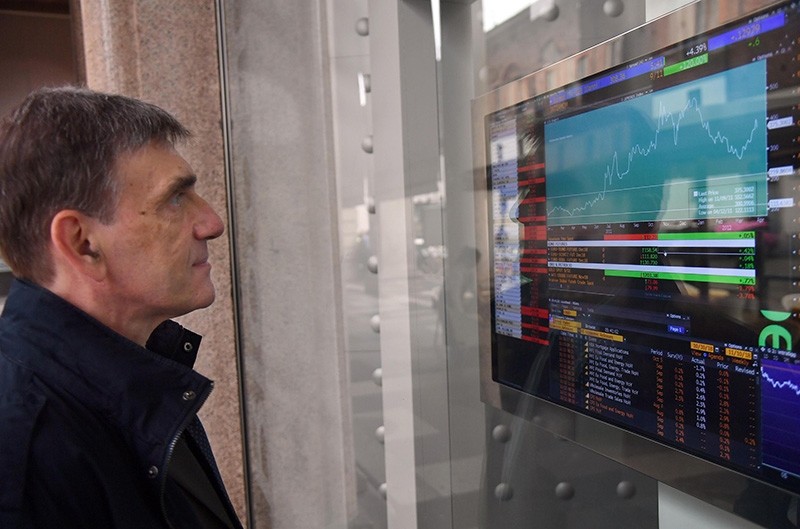 U.S. stocks tumbled for a second straight session on Thursday as volatility reigned on Wall Street amid worries about higher interest rates and trade wars.

At the closing bell, the Dow Jones Industrial Average was at 25,049.65, down 2.1 percent or 545 points, bringing its losses for the week to more than five percent.

European stock markets fell Thursday as economic strains and a drastic downturn in Asia spooked investors, but Wall Street managed to put a halt on its sharp fall seen the previous day, the worst since February.

In the U.S., banks and health care companies are taking some of the worst losses while technology companies are slightly higher after a series of big losses.

Bond yields, which have spiked over the last week, slid after the Labor Department said consumer prices grew only slightly in September. That's a sign inflation remains under control and suggests the Federal Reserve won't have to raise interest rates at a faster pace.

The market's recent decline was set off by a sharp drop in bond prices and a corresponding increase in yields last week and early this week. And there are lingering concerns about the unresolved trade dispute between the U.S. and China. Strong earnings reports in the upcoming weeks could soothe investor nerves, but any negative comments from company executives about future profits could have the opposite effect.

U.S. President Donald Trump blamed "crazy" policies of the Federal Reserve for contributing to financial market turmoil, although a White House spokesman said Thursday he was not trying to dictate Fed policy.

Speaking shortly after Trump lambasted the Federal Reserve for being "too aggressive" in raising interest rates, Larry Kudlow, head of National Economic Council, said the president was not trying to influence monetary policy.

"We know the Fed is independent. The president is not dictating policy to the Fed. He didn't say anything remotely like that," he said on CNBC.

"In the absence of a specific trigger, investors are currently voting with their feet due to mounting concerns around trade tensions and the impact on global growth, higher interest rates in the U.S., and a potential rotation away from equities due to rising bond yields," said Richard Hunter, head of markets at Interactive Investor.

U.S. Treasury Secretary Steven Mnuchin, meanwhile, said that Wall Street's rout was a natural correction and not caused by any particular factors.

"It is clearly a necessary development for those economies that are showing much improved growth, inflation that is picking up... unemployment that is extremely low," she told a press briefing in Bali, host to annual meetings of the IMF and World Bank this week.

The IMF on Tuesday cut its global gross domestic product (GDP) growth forecast by 0.2 percentage points to 3.7 percent for both 2018 and 2019, citing economic uncertainties.

"All bets are off," warned Stephen Innes, head of Asia-Pacific trading at OANDA, adding that markets were "fraught with peril."

"Interest rate put aside, the Sino-US trade spat is to blame for the October market rout because people are worried the friction would evolve into a political confrontation," Guangzhou Wanlong Securities said in a research note.

"I think the Fed is making a mistake," Trump told reporters as he arrived for a campaign rally ahead of the U.S. midterm elections.

Later in the day, he told reporters at the White House: "It is a correction that I think it is caused by the Federal Reserve, with interest rates. I think the Fed is out of control."

Trump named Powell to lead the central bank but can only fire him for cause.

Trump has repeatedly touted Wall Street records as proof of the success of his economic program.

European markets are struggling also owing to tensions between Brussels and Rome over Italian budget plans that have revived fears about the Eurozone. Also simmering are the stalled Brexit negotiations between Britain and the EU.

Germany's government meanwhile on Thursday slashed its growth forecasts for 2018 and 2019, blaming "a weaker international trade environment" for sapping the export powerhouse.