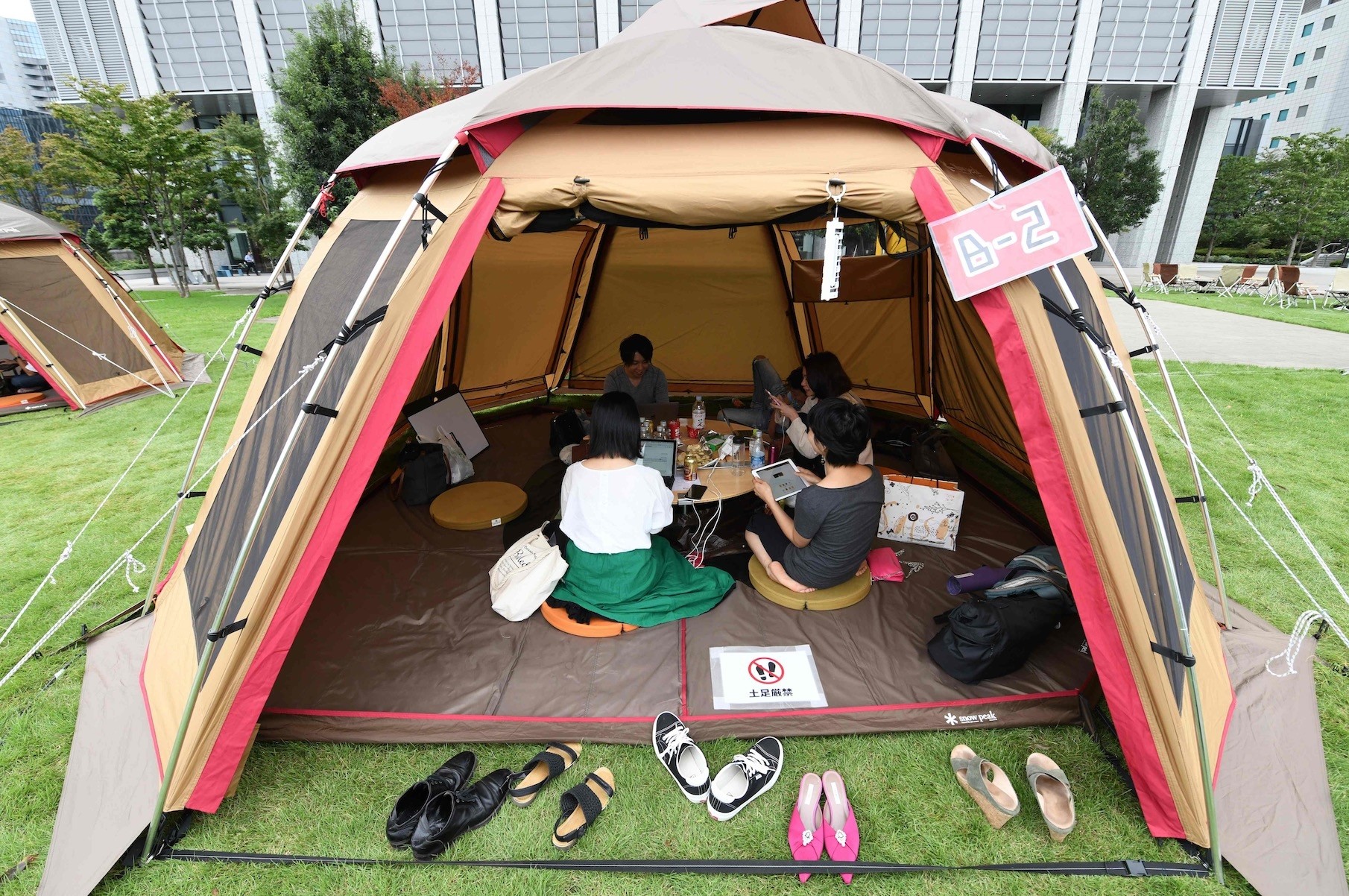 Company employees work inside camping tents erected on the lawn outside an office building in Tokyo.
by French Press Agency - AFP
Oct 15, 2018 12:00 am

From tiny one-person cubicles in underground stations to camping tents under towering skyscrapers and even karaoke clubs, in workaholic Japan, workers are never short of a place to work

Unusual work venues are popping up all over Japan as firms try to move from chaining their employees to their desks towards offering staff more freedom in their working practices and as the gig economy spreads even to this temple of corporate culture. On the pavement in Tokyo's Marunouchi financial district, groups of businesspeople clutching laptops sit on pillows around a low table... in a camping tent surrounded by shimmering glass buildings.

These temporary "outdoor offices" created by Snow Peak Business Solutions are also available in riverside parks in Tokyo suburbs and are proving a hit with firms keen to get staff out of the stuffy office. Yasuyuki Minami, who works for the Japanese arm of software giant SAP, said the unusual surroundings sparked "new business ideas" in their meeting held in the shade of the tent under the blazing sun.

His boss Tsutomu Ushida, an SAP Japan vice-president, agreed. "We tend to have fixed and stereotyped ideas when we are in the office. This was a good experience of working in the open air - something we don't experience every day."

Ryo Murase, the head of the company promoting these open offices, said people enjoyed working "under the sunshine and feeling a gentle breeze."

"We live in a world where AI and robots are taking over. I believe we humans should do something more emotional, inspiring, compassionate and exciting," he told Agence France-Presse (AFP).

Still inside but a long way from a conventional office is the teleworking karaoke room offered by Japan's biggest karaoke operator. Daiichikosho started the new service in April last year and now opens up its singing rooms for office space at 33 outlets close to business districts in big cities. For 600 yen ($5.30) per hour, users can display images directly from their laptop computers onto the big screen on the wall usually used by karaoke singers for lyrics. Shy public speakers can also practice business presentations using the karaoke microphone and a white board - all in a soundproof room. Hideyuki Aoki, an employee at NTT Communications, uses the service several times a week while he is on the road.

"At first, I felt uncomfortable but once I used the room, I found it very convenient," Aoki said. "Now I'm using it as my business hub."

Takayuki Suzuki, from Daiichikosho, says many travelling businesspeople or freelancers use cafes for work but are worried about opening sensitive documents with others around.

"You can have your own enclosed space at a karaoke club, so you can work without worrying about information leaking or people peaking onto your desk," said Suzuki.

Also catering for teleworking professionals, Fuji Xerox and the Tokyo Metro system have installed "satellite offices" in major subway stations around the Japanese capital. The black-and-white cubicles are equipped with a desk and a chair as well as a computer display and wifi and can be reserved online for 200 yen per 15 minutes.

Unlike in many major cities, commuters in super-polite Japan rarely use their mobile phones to avoid disturbing others and the cubicle offers an opportunity to make a business call without hesitation.

"The conventional office space will not disappear, but we want to get rid of space barriers and improve the diversity of working practices," said Yasutaro Tanno, an official at Fuji Xerox, at a cubicle set up at Tameike-Sanno station in downtown Tokyo.