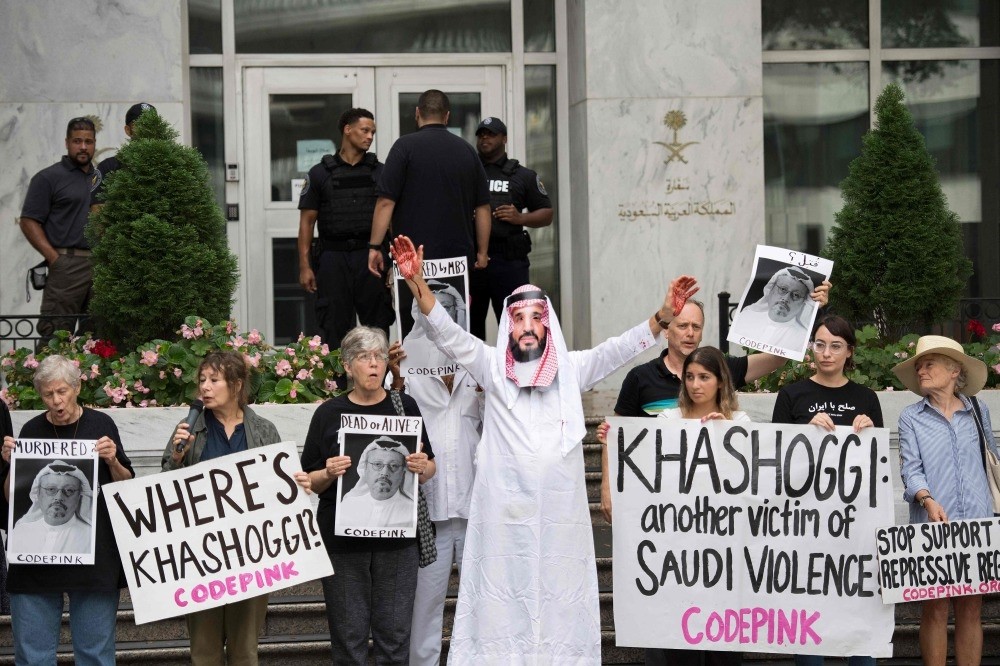 A demonstrator dressed as Saudi Arabian Crown Prince Mohammed bin Salman (C) with blood on his hands protests with others outside the Saudi Embassy in Washington, DC, on Oct. 8, demanding justice for missing Saudi journalist Jamal Khashoggi.
by Daily Sabah with Wires
Oct 17, 2018 12:00 am

After a large number of officials and high-level executives decided to pull out of the upcoming high-profile investment conference in Riyadh amid concerns over journalist Khashoggi's disappearance, questions have been raised on whether the event will go ahead

Top business executives as well as government officials from a number of countries are distancing themselves from Saudi Arabia over the disappearance of dissident journalist Jamal Khashoggi, with many canceling their attendance at an upcoming investment conference in the country.

With reports circulating of the writer's torture and killing in the Saudi Consulate in Istanbul, executives who have been doing business with Saudi Arabia for years are in damage control mode. What was at first a trickle of cancellations for the Saudi event, due to be held in Riyadh on Oct. 23-25, has turned into a rush.

The Future Investment Initiative was set up last year as a kind of "Davos in the Desert" for the world's business elite to network.

At last year's inaugural event the country announced the creation of a whole new city in the desert that would showcase new technologies like renewable energies.

The conference is organized by Saudi Arabia's mammoth sovereign wealth fund, the Public Investment Fund, and has been billed as a showcase for the economic reforms of the crown prince.

But it has been thrown into confusion since Khashoggi, a Saudi national and U.S. resident and Washington Post columnist critical of Riyadh's policies, failed to emerge from a visit to the Saudi Consulate in Istanbul on Oct. 2.

Speculation continues to grow that Khashoggi was killed by Saudi authorities after entering the consulate.

Saudi authorities have yet to give a clear explanation of Khashoggi's fate, while several countries – particularly Turkey, the U.S. and the U.K. – have expressed their desire that the matter should be clarified as soon as possible.

The investment conference's website previously featured a list of speakers. But that has now been removed amid the wave of defections. The latest withdrawals will leave only a handful of top bankers left to speak at the event.

The scale of the executives' cancellations, however, has raised questions whether the event will actually go ahead — and how that could affect longer-term business relations with Saudi Arabia.

Christine Lagarde, the managing director of the International Monetary Fund (IMF), was the latest name to cancel plans to attend the conference amid growing concerns over Khashoggi's disappearance.

"The Managing Director's previously scheduled trip to the Middle East region is being deferred," a statement by the IMF said. U.S. President Donald Trump has said that Treasury Secretary Steven Mnuchin will decide by Friday whether he will go to the event in Riyadh.

Germany's Foreign Minister Heiko Maas said yesterday he would delay a decision on whether to go through with a planned visit to Saudi Arabia until Riyadh gives more clarity on the disappearance of Khashoggi.

Dutch Finance Minister Wopke Hoekstra said on Tuesday that he will most likely not attend the conference.

Among others, the chief executives of HSBC, Standard Chartered, Credit Suisse and the London Stock Exchange, as well as the Chairman of BNP Paribas withdrew on Tuesday from the event.

Other business leaders who have announced they would not attend the conference, include Uber Chief Executive Dara Khosrowshahi.

Tidjane Thiam, the chief executive of Credit Suisse, has likewise dropped plans to travel a source familiar with the situation told Reuters.

Ford Motor Company Chairman Bill Ford was also reported to have canceled his trip to the conference.

The New York Times, CNN, CNBC, Bloomberg and the Economist have also announced they would not sponsor the event, and several prominent journalists have said they would not attend.

Alphabet Inc's Google also dropped out on Monday from the high profile conference. Google said in a statement that Google Cloud Chief Executive Diane Greene would not attend the summit.

While most of the bankers withdrew without linking their actions to the controversy over Kashoggi's fate, sources at some of the banks privately made clear they were concerned about potential reputational fallout from being linked with the event. The City of London Corporation, which governs the capital's financial district, said its Policy and Resources Chairman Catherine McGuinness would no longer attend.

"We support the U.K. Government's call for the Saudi authorities to cooperate fully with investigators to deliver a clear and credible answer to the question of what happened. We will be raising these concerns with our Saudi counterparts," a spokesman for the group said.

Turkey believes Khashoggi was murdered and his body removed. Saudi Arabia has so far denied that, but American news outlets have reported the country is now preparing to acknowledge Khashoggi's death in a botched interrogation.