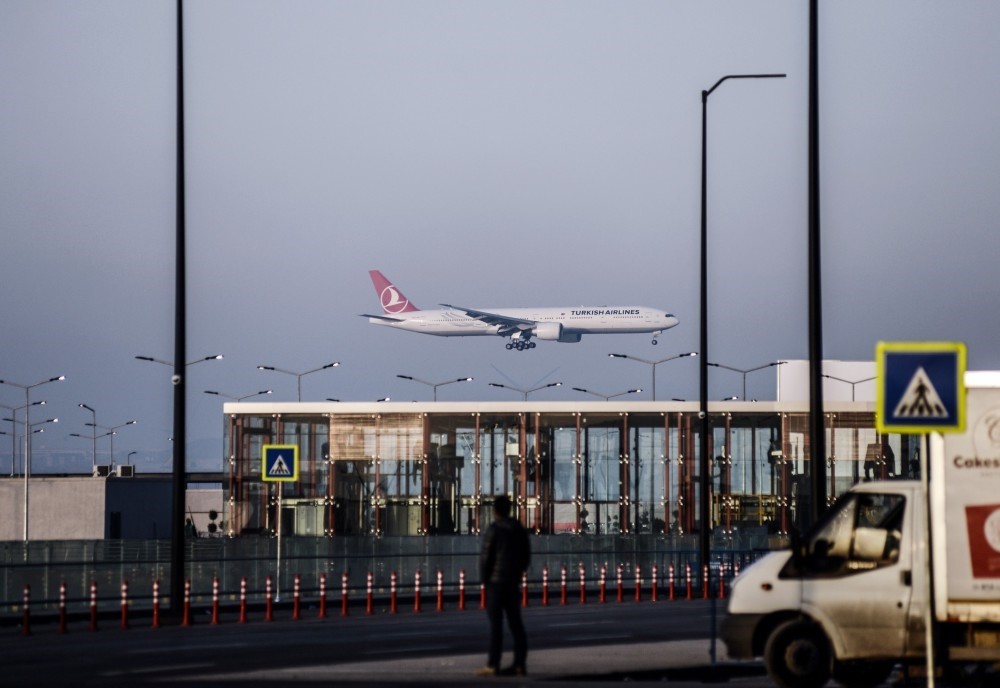 National flag carrier Turkish Airlines (THY) made yesterday its maiden flight from the new Istanbul Airport to the capital Ankara.
by Daily Sabah Nov 01, 2018 12:00 am

Istanbul Airport, Turkey's largest infrastructure project with an investment cost of $30 billion, has turned a golden page in the Turkish aviation history with the aim of making the country's largest metropolis a global aviation hub. From an aviation perspective, Istanbul Airport, which opened its doors to travelers on the 95th anniversary of the Turkish Republic, is unprecedented in terms of passenger capacity. It is expected to serve 200 million passengers annually by 2028 when all the facilities of the project are completed.

According to a report prepared by IGA, the five-company consortium that built the Istanbul Airport, it will be possible to reach more than 300 destinations from the airport with 250 international destinations.

The promising and continuously growing aviation industry in Turkey has made the country a potential candidate to accomplish its ambitious goal to claim the title of an aviation hub. The sector has recorded a 14 percent compound annual growth from 2002 to 2014.

The development of the aviation sector is evident in the growing number of destinations, passengers, airports and planes. While Turkey had only 162 planes in 2003, the number rose by more than 300 percent and reached 517 last year. Back in 2003, a total of 26 airports across Turkey were operational and with the opening of Istanbul Airport, the number of airports jumped to 56 over the last 15 years. With the inclusion of more aircraft and airports, the passenger traffic has also seen profound growth. According to the data of the General Directorate of Civil Aviation, Turkish airports served 34.4 million passengers in 2003. Increasing by 567 percent, the number of passengers at airports across the country reached 193 million. Turkey's busiest airports were Istanbul's Atatürk International Airport and Sabiha Gökçen with total 95.1 million passengers in 2017, up from 90 million previous year. Atatürk Airport alone served 63.7 million passengers last year.

Turkish airports welcomed nearly 164 million people between January and September this year, while over 31 percent of air passengers used Turkey's busiest airport, Atatürk Airport. The new airport will be able to handle up to 90 million passengers annually with a 1.4 million square meter terminal building, ranking in the world's top five. The number will rise to 200 million passengers when all facilities are complete in 2028 and will become the world's largest airport, exceeding Atlanta's Hartsfield-Jackson Airport with an annual capacity of 104.1 million passengers.

Once all the phases are completed, the daily take-off/landing average will be likely around 3,500 and it will have a capacity for 347 narrow-body and 266 wide-body planes in addition to six runways and 143 boarding bridges. In order to better understand the potential of the Istanbul Airport to become a global hub for long-haul flights, it is beneficial to look at the capacities of the other busy airports. According to the last year's data, the number of passengers at London Heathrow was recorded at 78 million.

Offering services for 104 airlines and providing direct access to 326 network destinations worldwide, the number of passengers at Amsterdam Schiphol Airport last year was 68.4 million with a 7.7 percent increase from the previous year.

Completed within 42 months, the first phase of the airport was built with a cost of $7.2 billion with a public-private partnership (PPP) model by a consortium of Turkey's leading contractors Limak, Kolin, Cengiz, Mapa and Kalyon. The consortium will pay $1.25 billion annually for 25 years.

The total investment cost of the giant project is estimated to stand around $30 billion. The first stage will begin operations with two runways - 3,750 and 4,100 meters long, respectively - and an air traffic control tower and service buildings. Some 200,000 laborers worked during the construction of the first phase. The other phases of the airport, which is constructed on an area of 76.5 million square meters, are planned to be completed by 2028. When the construction of all the phases is complete, the airport will have six runways and operate with a capacity for more than 500 planes. The open and closed parking lot of the airport will be able to serve 70,000 automobiles.

Istanbul's new airport will be home to the world's largest duty-free shopping complex. The 53,000 square meter shopping complex will consist of six sections, including luxury stores and bazaar concepts.

The activities in Schiphol Amsterdam constitute a vital engine driving the Netherlands' economy and generating employment. The aviation sector contributes more than $30 billion every year to the GDP (gross domestic product) of the Netherlands. The Schiphol site hosts about 500 companies providing employment for nearly 65,000 workers. The aviation operations at the Istanbul Airport will contribute to the macroeconomic data of the Turkish economy to a considerable extent. Istanbul New Airport is expected to provide employment for 225,000 people by 2028, as an economic impact analysis report prepared by the Center for Economic and Foreign Policy Studies reveals. Furthermore, an additional household income will be created of around $3.8 billion-$4.4 billion, and its contribution to Turkey's national economy will reach up to 4.2-4.9 percent of the national income.