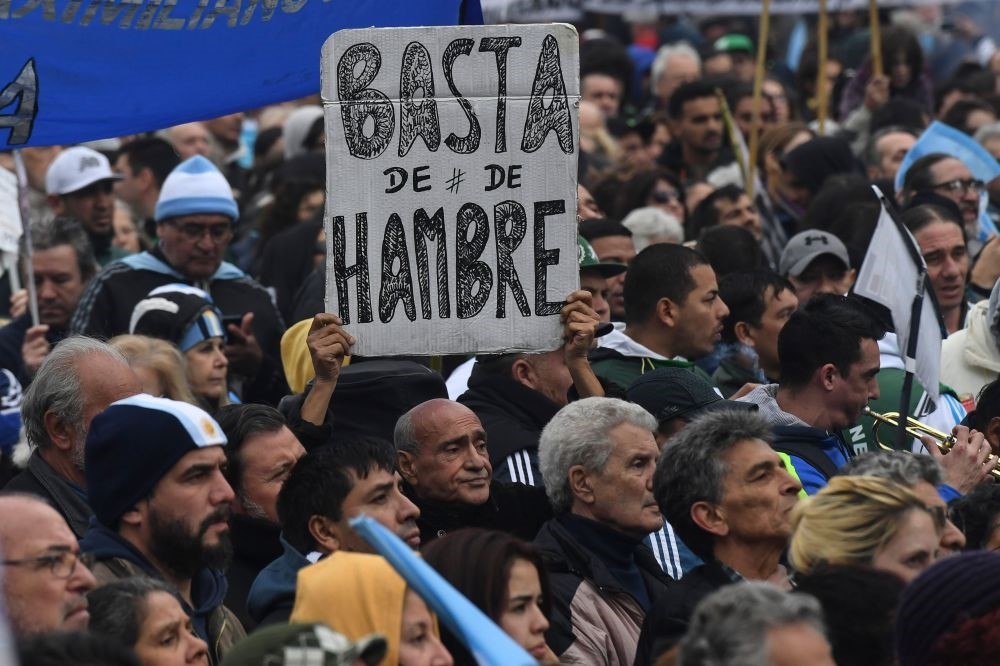 A protester holds a placard reading ,No More Hunger, during a demonstration against the government of Argentine President Mauricio Macri.
by Nov 17, 2018 12:00 am

Suffering from high inflation triggered by rising food prices, the Argentinians are unable to cope with the staggering economic conditions and to get by until the end of the month

In the Buenos Aires metro, Roberto stands in his empty snack bar and shrugs as people hurry past. He knows the problem: "There's simply no money," he says.

Argentina's economic crisis and runaway inflation has eroded most people's purchasing power to the point where they can't make ends meet at the end of the month, let alone afford a lunchtime snack in Roberto's shop.

Even for those who have a declared, tax-paying job in a country with a massive black economy, it's difficult to make wages last until the end of the month.

"What makes me anxious is the food prices and the rent for the apartment, which has gone up enormously," said Antonia Vianello, a mother of two children, aged 17 and 2.

"If it continues like this, next year's going to be hard," said Vianello, a receptionist in a clinic.

"For the moment, we've decided that our eldest will look after his little brother while we work."

Hilde counts and recounts her money in a shop before grimacing and paying up. At 86, she spends a lot of time looking for vegetables she can afford.

"Medicines have become very expensive," she said. "I can't manage with my pension, 8,000 pesos ($220), so my children have to help me." The cinema and the theater are "luxuries" she can no longer afford.

Most Argentines have had to cut down drastically in the hopes of riding out an economic crisis that has seen the peso lose half its value against the dollar this year, as the conservative government slashed public service jobs.

On Thursday, the Senate approved an austerity budget which lops 10 percent off last year's, calling for greater sacrifices from a beleaguered public.

Inflation rose more than 5 percent during the month of October, surpassing 45 percent for the year.

President Mauricio Macri has promised to lower it to 10 percent by the end of his mandate next year, but most Argentines see that as highly unlikely.

Thousands of jobs have been lost through recession, particularly in the public sector.

Rafael Lopez, 50, puts a brave face on it, saying sales at his grocery shop are holding up, including the traditional Argentine "alfajore" cakes. But his profit margins have disappeared.

"You have to watch everything to find savings. Electricity? I only have two bulbs. No gas. No landline. I'm trying to cut fixed costs to an absolute minimum."

Daniel Borg, 60, has just retired after a 45-year teaching career. He renovated an old bus as a camping car, "but I can't make any use of it because I don't have money for diesel. It's impossible."

Fuel prices have soared 75 percent in a year, foodstuffs 40 percent and public transport 60 percent. Salaries have been unable to keep pace, rising only 24 percent on average.

The government announced this week that it would make a one-off payment of 5,000 pesos ($138) to private sector employees to ease their situation.

"Every day, something goes up, people can't take it anymore. I have my savings but some people only have the vital minimum to survive," said Borg.

Just over a quarter of Argentina's 44 million population live below the poverty line, official figures show, though the economic crisis is now beginning to affect the middle class as well.

"We don't eat at the restaurant any more. This year, we won't go away on holiday, no holiday camps for the children either. We pay the house loan, the school, health insurance, the bills, and with what's left, we eat," said Roxana Gil, 32.

She and her husband hold middle management jobs at a big company. They are awaiting their third child in March.

"I'm waiting for the change to change," she jokes, referring to Macri's Cambiemos (Let's Change) coalition, which blames the previous leftist government of Cristina Kirchner for emptying government coffers.

According to Borg, people will think long and hard about the kind of government they want before next year's elections.

"People voted for a government which put a rope around their neck. Many of them regret it now, let's hope they've learned their lesson."