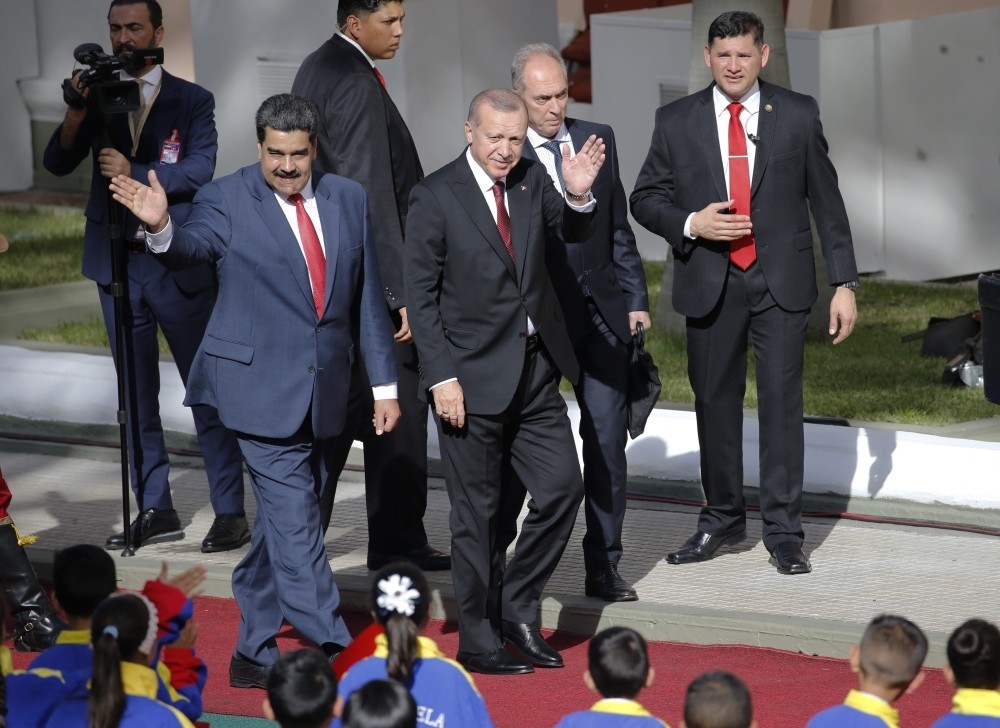 President Recep Tayyip Erdoğan's historic visit to Venezuela has paved the way for a new phase in Turkey's ties with the Latin American country as their leaders reiterated their commitment to expanding economic, political and cultural ties

Recep Tayyip Erdoğan's first presidential visit to Venezuela will pave the way for stronger partnership as Turkish and Venezuelan leaders inked a number of deals while reiterating commitment for joint steps to upgrade existing cooperation. As the visit marked a historic moment in bilateral ties, it also opened a new phase for future cooperation. On Monday's visit to Venezuela, President Erdoğan and Venezuelan President Nicolas Maduro evaluated the improving economic, political and cultural relations between the two countries, drawing attention to the accelerated steps in the recent period thanks to sophisticated dialogue mechanisms.

During a joint press conference, preceded by a ceremony where Erdoğan was awarded with the Order of the Liberator, the president iterated Turkey's sorrow over the attempted assassination of the Venezuelan president. "In our view, Venezuela holds an important position in Turkey's policy of opening up to Latin America. We are determined to further our relations with Venezuela, preserving the momentum achieved over the past two years in bilateral ties," Erdoğan said. He added that the two countries are resolute to improve ties in every field, including political, military, economic, trade and culture.

In the period of January to October, Turkey's exports to Venezuela totaled $91.2 million while its imports from the South American nation were recorded at $984.4 million. The exports to Venezuela increased by 106.2 percent to $37 million last year, up from $18.1 million the year before.

Furthermore, the national flag carrier Turkish Airlines (THY) has also increased the number of flights to the region. The carrier's operations have made a significant contribution to Turkey's economic and trade ties with the region.

Turkey and Venezuela also inked an agreement to improve trade in May.

In a bid to solidify bilateral ties, 10 treaties were signed between the two countries, including on economic relations, mining, maritime transportation, defense industry cooperation and education.

Speaking at the joint conference, Venezuelan President Maduro stressed that the agreements will be effectively implemented to make the most of their benefits for the two countries. Maduro underlined his confidence that Turkish investors would "act in the interests of both countries," praising the "beautiful" buildings erected in the South America country by Turkish firms.

"Turkish investors will continue to develop and strengthen trade and the progress in oil production and refineries, petrochemicals for gold production, in diamonds, coltan, iron aluminum and tourism," said the Venezuelan president.

"We do not interfere in the trade of the U.S. or other countries, nobody should interfere with our commercial and economic activities," he said, stressing that the South American country would continue to legally export gold and multiply gold production to meet its target of having the second-largest gold reserves in the world.

Venezuela's central bank this year began refining gold in Turkey following a wave of international sanctions that have left it unwilling to carry out such operations in Switzerland. The refined gold in Turkey is later transferred to the asset portfolio of the Venezuelan central bank.

The central bank for several years has been buying gold from small miners in the south of the country and refining it to be used as monetary gold to shore up its international reserves that have tumbled as the country's socialist economy implodes.

Turkey's relations with South American countries had been friendly but stagnant until the 1990s, mainly due to geographical distance and differences of foreign policy priorities, as the Foreign Ministry defines it. The late President Süleyman Demirel was the first Turkish president to visit the Latin American region when he paid official visits to Argentina, Brazil and Chile in 1995.

Erdoğan's visits to Mexico, Colombia and Cuba in 2015 marked his first visit to Latin America and the second presidential visit to the region after an interval of 20 years. His second tour took place in 2016 when he visited Chile, Peru and Ecuador. Apart from that, Foreign Minister Mevlüt Çavuşoğlu also visited the region last year, traveling to Argentina, Paraguay, the Dominican Republic and Mexico.

With the establishment of the "Action Plan for Latin America and the Caribbean" in 1998 and the declaration of 2006 as the "Year of Latin America and the Caribbean" in Turkey, relations gained new momentum. From that point on, the two sides began to pay reciprocal official visits to each other. Turkey attaches great importance to high-level bilateral visits with the countries of the region and holds numerous meetings in order to improve economic and political relations; concluding trade, economic, military, cultural and technical cooperation agreements to solidify the existing legal framework; establishing business councils, participating in fairs, initiating promotional activities to increase trade volume; and increasing diplomatic representation in the region and increasing cultural interaction to ensure better and more accurate representation. Turkey's multidimensional approach has been demonstrated most clearly in the economic sphere, as it has enabled a boost in trade relations between Turkey and Latin America. Turkey's trade volume with Latin America increased from $3.4 billion in 2006 to $9.2 billion in 2017.