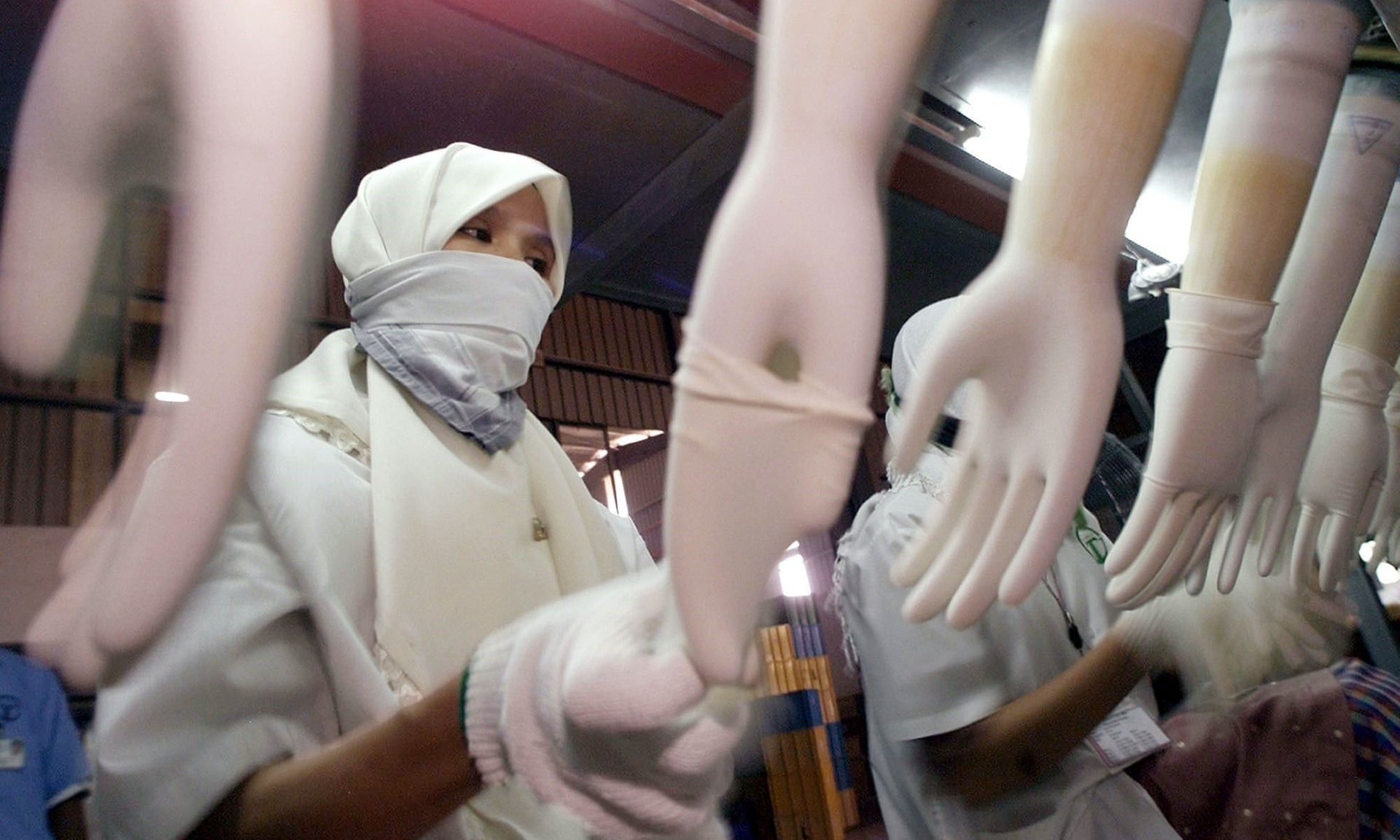 The British health ministry launched an investigation into Malaysian factories where migrants are allegedly subjected to forced labor, overtime and debt bondage, during production of medical gloves provided to the country's health service provider NHS

Britain is launching an investigation into medical gloves used by its health service after a Thomson Reuters Foundation expose found stocks from Malaysia could be tainted by the mistreatment of migrant workers at the world's biggest glovemaker.

Top Glove last week vowed to do more to tackle excessive overtime after the Thomson Reuters Foundation found some workers clocked more than the amount permitted by law, and to cut ties with agents charging migrant workers huge fees to get them jobs.

The Thomson Reuters Foundation has discovered that at least one Top Glove product is supplied to the NHS via a British firm, raising doubts about Britain's capacity to ensure its medical supply chain is free of labor abuses and unethical practices.

Labor experts, doctors and diplomats have voiced concerns to both the British and Malaysian governments about Malaysia's rubber glove industry, which is also facing scrutiny globally from U.S. activists to public procurement officials in Sweden.

"In line with the government's policy and leadership on modern slavery, we take any allegations of this kind incredibly seriously," said a spokeswoman for Britain's health department.

"We are working with NHS Supply Chain (an organization formed by the government to supply goods to the NHS) to ensure that these issues are investigated as a matter of urgency."

Top Glove, which accounts for more than a quarter of all rubber gloves produced worldwide and exports to 195 countries, employs at least 11,000 migrant workers, from countries including Nepal, Bangladesh, Myanmar and India.

Top Glove was not immediately available to comment on the investigation launched by Britain's health ministry.

But Top Glove's managing director Lee Kim Meow told the Thomson Reuters Foundation on Thursday that they would want to stop dealing with any suppliers found to be unscrupulous.

"It's our duty to do that, we will never condone it," he said, defending the conditions in the company's 40 factories - 35 of which are in Malaysia.

Campaigners said this case showed Britain was struggling to monitor and manage its medical supply chain, despite the country's claim to be a world leader in tackling modern slavery.

Britain's landmark 2015 Modern Slavery Act requires large companies to outline the actions they have taken to combat modern slavery in their operations, but the first-of-its kind law does not apply to public procurement - or NHS Supply Chain.

"It is glaringly obvious that Britain has taken modern slavery seriously in legislative terms but that is not translating into public procurement," said Cindy Berman, head of modern slavery strategy at the Ethical Trading Initiative (ETI).

"Britain is well behind at the European level when it comes to health procurement," she told the Thomson Reuters Foundation.

A production list from one Top Glove factory in Malaysia showed 'Handsafe' gloves were shipped to the U.K. company and NHS approved supplier HPC Healthline - now Polyco Healthline after a 2016 merger between Polyco Group and HPC Group.

The list could not be verified by the Thomson Reuters Foundation but Polyco confirmed one of their 'Handsafe' products which is sold to hospitals via the NHS Supply Chain's online catalogue comes from a Top Glove factory.

"Polyco Healthline does source from factories in Malaysia and owing to past policies and practices it is recognized as a country with risks associated with migrant labor and labor rights issues," said Nigel Watson of Polyco's supply chain team.

"We have a detailed process for supplier selection and work closely with those that are approved, supporting them to continually improve their practices and instill a transparent approach to work-life balance and social responsibility."

There is no suggestion of wrongdoing by Polyco but medical experts have questioned NHS Supply Chain's oversight and the effectiveness of a labor standards system it introduced in 2012 requiring suppliers to assess conditions in their supply chains.

"NHS Supply Chain has tried to ... ensure its goods are sourced in an ethical and transparent way," said Mahmood Bhutta, an NHS surgeon and founder of the Medical Fair and Ethical Trade Group at the British Medical Association (BMA) - a trade union.

"But it is clear that the system isn't working - there is a lack of transparency and ownership on the issue," said the BMA member, who has previously raised alarm about the manufacturing of gloves and surgical instruments destined for use in the NHS.

NHS Supply Chain said last month that it did not "knowingly procure" from a supplier using Top Glove as its manufacturer and pledged to investigate after being presented with the Thomson Reuters Foundation's reporting on Top Glove and Polyco.

"We have a range of contractual arrangements and initiatives in place to try and prevent (labour abuses) arising," a spokeswoman for NHS Supply Chain said in light of the findings.

Malaysian labor activists over the weekend demanded action from their government into the findings and urged Top Glove to commit to further investigate their working conditions.

A spokesman for the British High Commission in Kuala Lumpur - Malaysia's capital - said it had been made aware of concerns about Top Glove's treatment of migrant workers and was "raising our concerns to the Malaysian Ministry of Human Resources."

Pauline Gothberg, national coordinator of the Swedish County Council Network on Sustainable Public Procurement, said her office planned to audit several government suppliers of rubber gloves which had confirmed they sourced from Malaysia

Malaysia's Human Resources Minister M. Kulasegaran told the Thomson Reuters Foundation last week that major companies in the country must take the lead to ensure there are no labor abuses.

Several Top Glove workers said they worked a lot of overtime to pay off debts to recruitment agents in their home countries.

Some clocked 90 - 120 hours of overtime a month, according to documents seen by the Thomson Reuters Foundation, above the 104 hour overtime limit stipulated by Malaysia's labor laws.

One worker said he had borrowed $1,100 (864 pounds) from a moneylender with a 3 percent monthly interest rate to pay back an agent in Nepal who got him a job at Top Glove in Malaysia.

"If I don't work these extra hours, how could I possibly earn enough?" he said, requesting anonymity to protect his job.