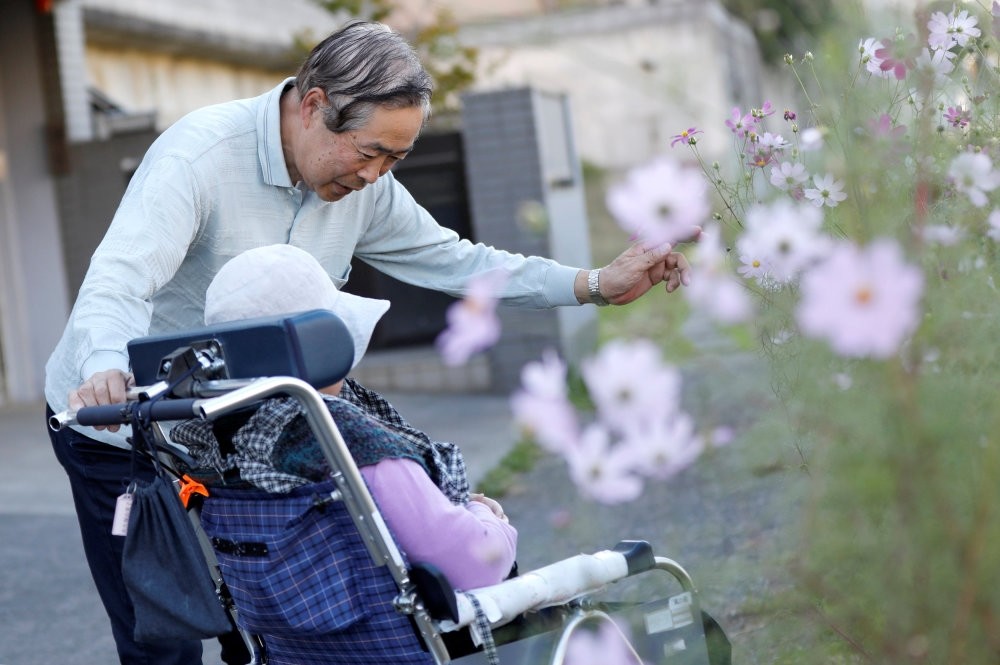 Yumiko Okubo, 71, had forgotten how to heat up food.

"What's a microwave?" she asked her husband, Eiichi.

Yumiko was in the early stages of dementia, struggling with vocabulary and unable to teach the kimono-dressing classes she had run for 25 years.

The difficulty with everyday tasks has made life challenging for her and Eiichi, who has been caring for her since 2008.

But she is also unable to deal with her finances - a situation that experts say is increasingly common in fast-ageing Japan and that puts trillions of yen worth of assets at risk. Rika Kambayashi, a social worker in Kyoto, says she has seen many cases of dementia patients withdrawing large sums without a clear grasp of what they are doing or why.

In one example, she said, a woman in her 90s withdrew 20 million yen ($266,000) of her savings at a grandson's urging. "She was saying she withdrew nine or ten. It took me a while to realise she was talking about a number of banknote rolls," Kambayashi said. A roll is typically one hundred 10,000 yen notes. "It was clearly a case of abuse."

Dementia has been diagnosed in more than 5 million Japanese. The government estimates that number will increase to 7 million to 8 million, or 6 to 7 percent of the total population, by 2030. The OECD has a somewhat lower estimate that dementia will affect 3.8 percent of Japan's population by 2037, still the highest among the 35 OECD states and far above the average of 2.3 percent predicted for the group.

Japanese with dementia will hold about 215 trillion yen ($2 trillion) in financial assets by 2030, compared with 143 trillion yen now, according to estimates by Dai-ichi Life Research. Many companies now face risks in doing business with people with dementia, whose families may return later to ask that the transaction be cancelled, said Jin Narumoto, professor of psychiatry at Kyoto Prefectural University of Medicine. A survey by Narumoto and three other researchers found about 30 percent of dementia patients and families have experienced financial losses because of the condition.

Bank officials say tellers now regularly encounter people with dementia who cannot use an ATM or who repeatedly ask the same questions. Some behave strangely, accuse employees of theft or even become violent. Dementia is closely linked to age, and by 2030, about 31 percent of Japan's population is projected to be 65 or older. As the country's life expectancy is 84 years, the highest in the world, the problem of dementia will only intensify.

Dementia is caused by several diseases, with Alzheimer's accounting for about two-thirds. It covers a range of symptoms, broadly defined as a decline in memory and thinking serious enough to hamper daily life. Patients gradually lose their ability to count, tell time, or recognise places and people, including close relatives. There's no known cure, although there are medications to slow the condition's progress.

As banks encounter more customers dealing with dementia, many, such as Nomura and Sumitomo Mitsui Trust Bank, are educating staff about how to safely and fairly handle interactions.

"In the past, teller staff have been dealing with each case ad-hoc. But it is important they sit together with people with medical background and learn about dementia," said Masaru Mimura, professor at neuropsychiatry at Keio University in Tokyo.

Guardians are appointed by a local court and help their clients professionally manage finances. They can act on behalf of their clients and even cancel contracts or purchases if needed. Perhaps most important, they help families learn to cope with the ailment, introducing them to social welfare services.

stolen by guardians, and many experts say there is little oversight. To address that, Shinkin Support assigns two guardians for each customer. It also conducts regular staff audits, much as banks do. "Because we assign two people, our cost is twice as much as others. But we think that is a cost we need to pay," said Hitoshi Hiramori, director of Shinkin Seinenkouken Support. "We think of this more as community service."

Several other banks offer products that allow guardians only limited access for daily use, to prevent embezzlement. Other organisations hope technology will provide a solution.

If someone who rarely withdraws money suddenly goes to an ATM seven times in one day, for instance - a possible sign their memory could be impaired - the app can alert the person's family, said Toshio Taki, board director of the firm. For the Okubos, such assistance would help reduce some of the stress of everyday life - and help the couple focus on the normalcy that remains. "Even after she stopped using a wallet by herself, she still could do other things completely fine, like taking pictures or walking," Eiichi Okubo said, reminiscing about 500-kilometre hikes they took in 2012 and 2014. "All my friends today are people who I came to know after Yumiko's dementia. So I feel I owe myself to her."