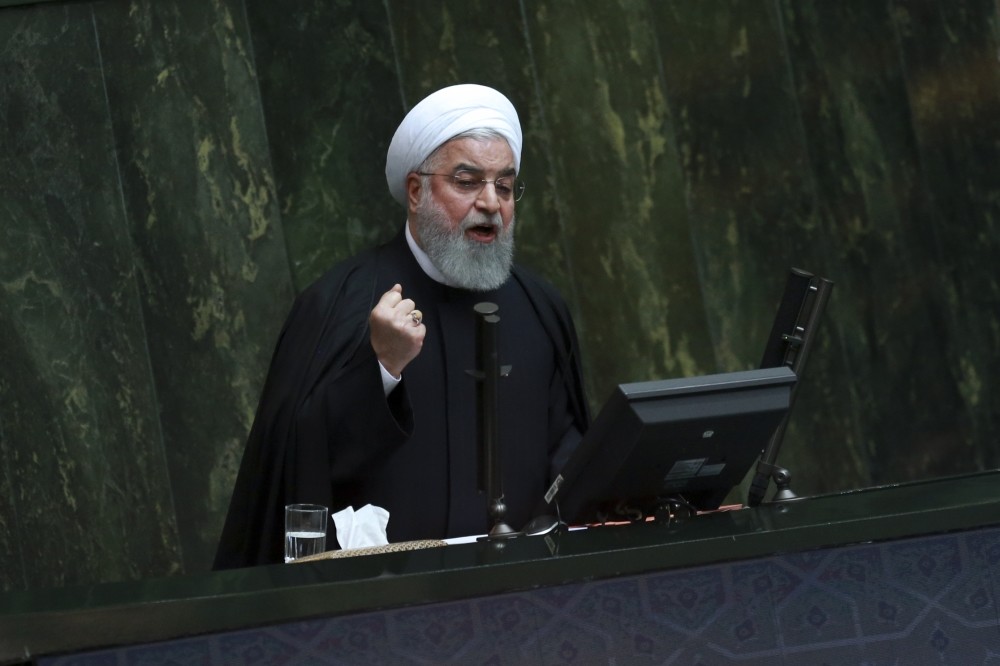 The Iranian government's new budget aims to curtail the impact of the U.S. sanctions while the acute economic challenges are yet to be faced with or without Washington's embargo

President Hassan Rouhani unveiled Iran's first annual budget since the return of U.S. sanctions, saying it had been adjusted to take account of Washington's "cruel" measures.

The president announced a 20 percent increase in public sector wages in a sign of the economic challenges the Islamic republic has faced since the U.S. pulled out of the 2015 nuclear deal in May.

Yesterday's speech gave only a few general points of the budget - which will now be scrutinized and voted on by parliament - but acknowledged the pressure Iran was under.

"Last year we faced some problems," Rouhani told parliament in a televised speech, referring to the widespread protests that hit the country almost exactly a year ago, sparked by anger over economic and political conditions.

"The real objective of the U.S. in all of this conspiracy and sanction and pressure... is to bring the powerful Islamic republic of Iran to its knees," he said, vowing that the U.S. "will definitely be defeated."

The renewed U.S. sanctions include an embargo on Iran's crucial oil sector.

The new budget did not say how many barrels of oil Iran hopes to sell in the next financial year, which starts in late March, but analysts believe it will be considerably less than the approximately 2.5 million it sold per day prior to Trump's withdrawal.

The U.S. granted waivers to eight key buyers of Iranian oil - including China, India and Turkey - though this has been a double-edged sword for Iran since it also helped push down the global price.

Rouhani came to power in 2013 representing the more moderate side of Iran's ruling elite, hoping a compromise on the country's nuclear program would reduce tensions with the West and allow foreign investment to boost the stunted private sector.

The return of sanctions has ended that hope, and forced Rouhani more towards the self-sufficient "resistance economy" preferred by supreme leader Ayatollah Ali Khamenei.

Concern over the economy pushed many Iranians to secure their savings in dollars and gold, triggering a run on the Iranian rial, which has lost around half its value since Trump announced the pullout.

"At one point early this year our foreign exchange cash reserve was practically zero, forcing the government to take hard decisions to save the country," Rouhani told parliament.

The government has pressured exporters to return their dollars to Iran, and Rouhani said they would lose tax incentives if they failed to repatriate their cash.

The central bank has used the returning dollars to shore up the collapsing rial, which has recovered to around 110,000 per dollar on unofficial exchanges.

The rial's fall drove up prices across the board, with food and drink costs up 60 percent in the year to November according to the central bank.

In September, central bank governor Abdolnasser Hemmati instead blamed "horrific growth in money supply." Its data shows that the amount of cash flowing around the Iranian economy has increased 24 percent annually for the past four years.

At one point, in April, the government forcibly shut down exchange houses and tried to fix the rate at 42,000 rials per dollar - which only fueled panic and drove speculators into the black market. Recognizing its mistake, the government reopened exchange shops and sacked the central bank governor a few months later.

The judiciary launched a fierce crackdown on currency speculators, dubbed "economic disruptors" that has seen dozens of traders put on trial and at least three businessmen executed.

The so-called "sultan of coins," Vahid Mazloomin, was hanged in October after being found guilty of amassing two tons of gold coins.

But sanctions and fraud are only part of the story in an economy with many long-standing problems. The budget was delayed several times in recent weeks, with reports that Khamenei had demanded unspecified changes to the final document.

Iran's woes beyond sanctionsAnalysts claim that many of the country's woes pre-date Trump and the sanctions. Iran-based economist Mohammad Mahidashti says the banking system is the "biggest problem - riddled with fictitious assets and non-performing loans."

Banks issued huge loans under Rouhani's predecessor Mahmoud Ahmadinejad with little apparent care for whether they would be repaid.

Parliament's economic commission said in March that half of all these loans - worth around $27 billion at the time - turned sour.

Desperately short of funds, banks have tried to attract fre

sh deposits with interest rates of 30 percent or more.

While providing a much-needed source of liquidity initially, the interest on these deposits has only added to banks' instability.

Rouhani said recently that "unhealthy" banks were being kept afloat by continuously borrowing from the central bank, and the debts of private lenders have doubled in the year to September.

Banks are also saddled with unsellable properties after pumping cash into a construction boom that ran out of steam around 2013.

"We have close to two million empty houses in Iran. There is simply no demand out there," said Narges Darvish, an economics lecturer at Tehran's Alzahra University. But the government is loath to let banks fail, fearing a public backlash - especially after the collapse of dodgy credit agencies helped fuel widespread protests a year ago.

Despite a privatization drive, much of the economy remains in the hands of the state, either directly, or because groups connected to the government or military are the major shareholders.

This has stifled the private sector, which struggles to attract investment and compete for projects, analysts say.

"These industries are only wanted because of rent and corruption," he told AFP.

Hopes that the nuclear deal would bring a flood of foreign investment to boost the private sector have been dashed by the return of sanctions.

"Those places that launder thousands of billions [of rials] are certainly financially capable of spending a few hundred billion on propaganda [against the laws]," Zarif told Khabar Online news agency last month.