Santa gets pushed out in China as leaders emphasize tradition 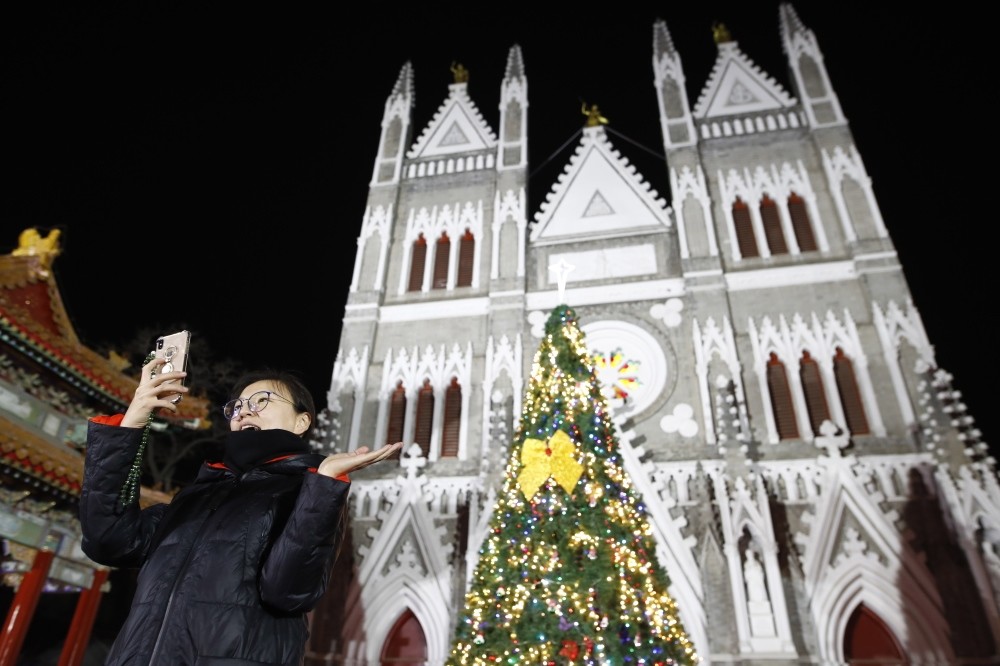 A woman takes photo in front of the Xishiku Catholic Church in Beijing, China, yesterday.
by Associated Press Dec 26, 2018 12:00 am

It took less than 24 hours for all the Christmas trees, lights and bells to disappear from a 27-story shopping and office complex in the Chinese city of Nanyang.

Even the giant teddy bear at the mall entrance wasn't spared, said Ma Jun, who works at a tutoring company in the building. "Everything is gone and cleaned," she said.

Christmas continues to be a shopping festival across most of China, with huge trees adorning shopping malls in Shanghai and Beijing, but a growing emphasis on traditional culture by the ruling Communist Party and the systematic suppression of religion under President Xi Jinping are imperiling Santa Claus's position.

"The ongoing local reaction against Christmas is part of the wider sentiment since Xi took power," said Zi Yang, a China expert at the S. Rajaratnam School of International Studies in Singapore.

Xi is trying to broaden the appeal of the Communist Party by casting it as a crusader for Chinese tradition in a fast-changing world, he said. "Therefore, foreign cultural elements such as Christmas are placed on the chopping block."

The seasonal humbug follows similar outbreaks of anti-Christmas rhetoric in 2014 and 2017. It appears not to be centrally organized, but rather a spreading resistance to foreign festivals by local authorities seeking to align themselves with the growing tide of cultural nationalism.

In Nanyang, about 950 kilometers (600 miles) west of Shanghai, government officials stopped by the office and shopping complex on Dec. 16 to say that Christmas decorations would have to come down, said Ma, the tutoring company employee.

An official from the city's urban management bureau hung up when asked for comment.

Nine hours by car south, Hengyang, a city in Hunan province, said in a Dec. 19 notice posted on an official government social media account that anyone caught holding Christmas sales or celebrations that blocked the streets would be punished. Communist Party members, the notice said, should avoid foreign festivals and instead be "models of adherence to Chinese traditional culture." Hengyang police posted a video on their official social media account of locals discussing the importance of Chinese culture and plans to avoid ostentatious Christmas celebrations.

The Langfang urban management bureau declined comment. The state-run Global Times newspaper argued that Western media are exaggerating China's crackdown on Christmas and reported that the restrictions in Langfang were aimed not at Christmas but at cleaning up roadside stalls and migrant vendors in hopes of winning a "National Civilized City" award from the Communist Party.

Police in the Panlong district of Kunming, the capital of Yunnan province in southern China, circulated a notice that hotels, karaoke parlors, internet cafes, bars and other crowded places must prohibit Christmas-related decorations and activities.

"It is forbidden to hang Christmas stockings, wear Christmas hats, place Christmas trees, and so on," the notice read.

It wasn't clear if the notice applied to all of Kunming city, though a police officer told the AP that the order to circulate it came from city officials.

Preachers are coached on how to convey Communist Party core values in their sermons and national flags and songs have been injected into some church services, he said.

Liu provided the AP with a notice sent to churches in Zhoukou, a city to the east of Nanyang in Henan province.

It tells churches to vet Christmas plans with the government, forbids minors from participating in Christmas events and caps expenses at 2000 yuan ($290). "I wish you all a happy Christmas! God bless you," read the notice, which Liu received from a pastor in China.

An official at the United Front Work Department in Zhoukou referred queries to the religious affairs bureau, which could not be reached for comment.

Before becoming president, Xi went to Finland in 2010 and was photographed with Santa Claus. That kind of chumminess appears to be a thing of Christmas past, experts say.

The central government issued guidelines last year for a cultural revival project that calls for a marked boost in the international influence of Chinese traditional culture by 2025.

"You have a culturally conservative ethos in the country that has definitely been encouraged by the central party-state," said Guo Yingjie, a professor of Chinese studies at the University of Sydney. "It's not hard for university presidents or officials to say, 'OK celebrating Christmas can easily be seen as de-Sinification or promoting Western culture.'"

Students have taken to social media to complain about restrictions on Christmas celebrations at their schools.

At a top Shanghai university, a student union had its Christmas plans cancelled for the first time, an organizer told the AP on condition of anonymity, fearing rebuke.

The students came up with a solution: By replacing "Christmas" with "New Year's" in their activity proposal and changing the date from Dec. 25, it sailed past school administrators.

Students in the city of Qingdao were reprimanded for hosting an event about gratitude on Thanksgiving Day and warned not to celebrate Christmas publicly, according to a student, who also spoke on condition of anonymity, fearing retribution. Liu Kaiming, president of the Institute of Contemporary Observation, a civil society group in the city of Shenzhen, said that despite the drumbeat of official discontent, Christmas cheer continues to spread in China.

"The sound of resistance is more powerful on the surface, but it has no practical effect," he said. "Young people's enthusiasm for the festival is ever-increasing."