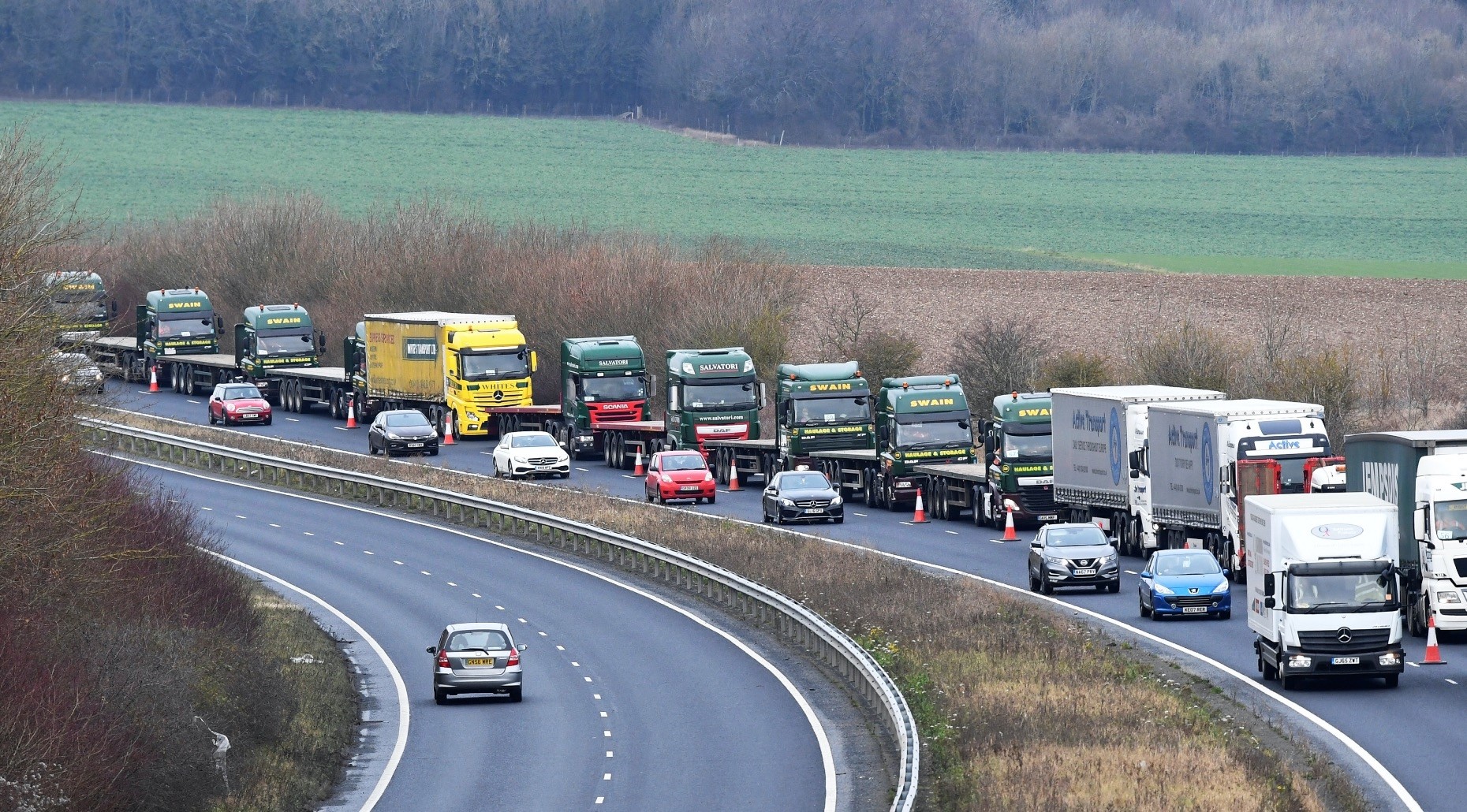 A line of trucks seen during a trial between the disused Manston Airport and the Port of Dover on how the road will cope in case of a u201cno-dealu201d Brexit in Kent, yesterday.
by Jan 08, 2019 12:00 am

In the event of a disruption at the border, the British government ran a test by sending 87 trucks on Kent roads and created a fake traffic jam to demonstrate its readiness for a no deal

Britain's government sent a convoy of 87 trucks on a test-run from a little-used airport to the country's main trading gateway to continental Europe yesterday - a rehearsal for the upheaval of a no-deal Brexit that was mocked as a clumsy waste of money.

Prime Minister Theresa May is trying to force her Brexit deal through parliament. If it is rejected as expected, however, business chiefs and investors fear the world's fifth-largest economy will leave the European Union without an agreement on their future relationship at 2300 GMT on March 29.

With lawmakers deadlocked, the ultimate destination of the Brexit project remains unclear.

Possible outcomes range from another referendum on European Union membership to a disorderly departure with no deal.

May's government has repeatedly warned that a no deal will lead to severe economic disruption, and yesterday's exercise was part of preparations to ensure essential supplies can keep flowing through Dover, Europe's busiest ferry port. The transport ministry said it was testing Manston airfield as a holding facility for lorries and traffic congestion on Kent roads in the event of disruption at the border.

Setting off from Manston, 87 trucks drove the 20 miles (32 km) to Dover and then back again. They will repeat the run later on yesterday.

"Less than a hundred lorries is a drop in the ocean compared to the more than 10,000 that go to the channel ports every day," said Charlie Elphicke, a Conservative lawmaker for Dover.

"Sending lorries across Kent on a wild goose chase to Manston airport and then to the port of Dover by small and winding, often single track 'A roads' through Kent villages is not the right plan."

Dover has been Britain's most important gateway to Europe since Roman times and the port now handles 17 percent of the United Kingdom's goods trade. Up to 16,000 trucks a day pass through with everything from perishable food to medicines.

Layla Moran, a Liberal Democrat lawmaker who wants another referendum on EU membership, said the truck journey was a farce.

"The idea that creating a fake traffic jam will show the EU we are ready for no deal is just plain stupid," Moran said. "This is a taxpayer-funded farce."

Brexit supporters say that, while there may be some short-term disruption, in the long-term the U.K. will thrive outside the EU, which they cast as a doomed and excessively bureaucratic project dominated by Germany.

But pro-Europeans fear Britain's exit will hammer the economy and undermine the West as it grapples with Donald Trump's unpredictable U.S. presidency and growing assertiveness from Russia and China.

The 'war game' was mocked on Twitter, with one journalist describing the queue of lorries as "a fake traffic jam ... to show the EU we are ready for no deal."

Facing defeat in parliament last month, May postponed a vote on the withdrawal agreement she negotiated with the EU and pledged to seek further political and legal assurances from the bloc. The EU has signaled it may try to allay the fears of May's critics but will not renegotiate the deal.

May said on Sunday that Britain would be in uncharted territory if her Brexit deal is rejected by parliament. A vote is due around Jan. 15.

"It's still hard to see any upside to Brexit," said Mike Hawes, chief executive of the Society of Motor Manufacturers and Traders (SMMT), which said new car sales in 2018 fell at their fastest rate since the global financial crisis a decade ago.

"Everyone recognizes that Brexit is an existential threat to the U.K. automotive industry and we hope a practical solution will prevail," he said, calling for lawmakers to back May's deal to guarantee a transition period.

In an attempt to prevent the United Kingdom falling out of the EU without a deal, more than 200 lawmakers have signed a letter to May urging her to rule out a no deal exit.