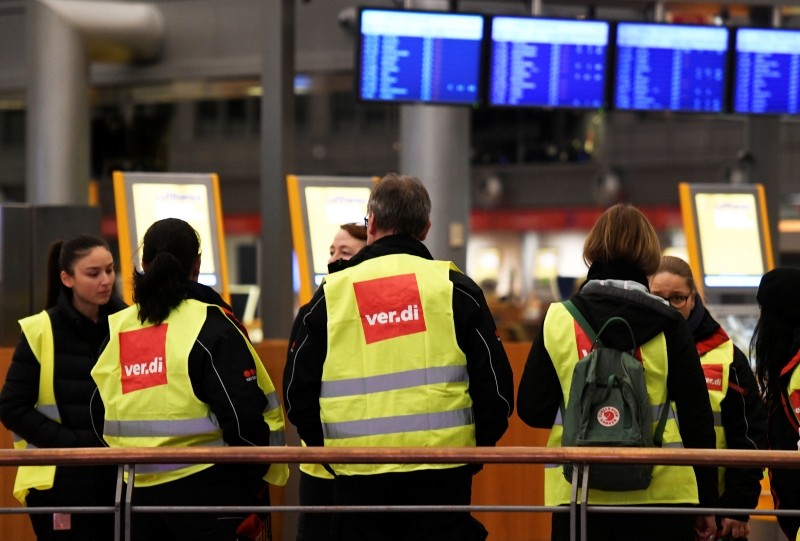 Members of German union Verdi demonstrate at the Helmut Schmidt airport during a strike of security personnel demanding higher wages in Hamburg (Reuters Photo)
by Jan 15, 2019 12:00 am

Hundreds of flights were cancelled at eight German airports Tuesday, including at the nation's busiest travel hub Frankfurt, as security staff walked off the job in a deepening row over pay.

Germany's powerful Verdi union said the strike would last from 02:00 am until 8:00 pm (0100-1900 GMT) at Frankfurt airport, with walkouts in Munich, Hannover, Bremen, Hamburg, Leipzig, Dresden and Erfurt following roughly the same schedule.

At least 220,000 travelers will be hit by cancellations and delays, the ADV airport association said, in a calculation that includes knock-on effects at other airports.

Frankfurt airport operator Fraport, which has axed 610 out of around 1,200 scheduled flights, urged passengers not to come to Europe's fourth-busiest airport during the strike.

The ADV airport association blasted the wave of strikes as "irresponsible."

"Verdi is unjustifiably carrying out these strikes on the backs of travelers, airlines and airports," ADV head Ralph Beisel said in a statement.

Verdi, which represents some 23,000 aviation security workers, said it was forced to ramp up pressure because talks with the BDLS employers' association were deadlocked.

"Employers did not respond to last week's warning strikes at all, they haven't come up with an improved offer," Verdi board member Ute Kittel told public broadcaster ZDF.

The union wants to see wages raised to 20 euros ($23) per hour for workers carrying out passenger, freight, personnel and goods checks at all German airports.

Rates currently vary nationwide, with staff in some airports in eastern Germany earning around 14 euros hourly, compared with just over 17 euros for their peers in the capital and western parts of the country.

The BDLS has balked at the proposed wage hike, instead offering pay increases of up to 6.4 percent.

The next round of talks is slated for January 23.

Lufthansa, among the airlines worst-hit by the strikes, said Verdi "has no interest in making its contribution to improving Germany as an aviation location."

"We already have the lowest quality security checks at the highest costs, compared to Europe and other countries around the world," said Lufthansa board member Detlef Kayser.

The dispute is the latest upheaval for air travelers in Germany, after a series of strikes by Ryanair cabin and cockpit crew in the second of half of 2018, including two pan-European walkouts, caused huge disruption.