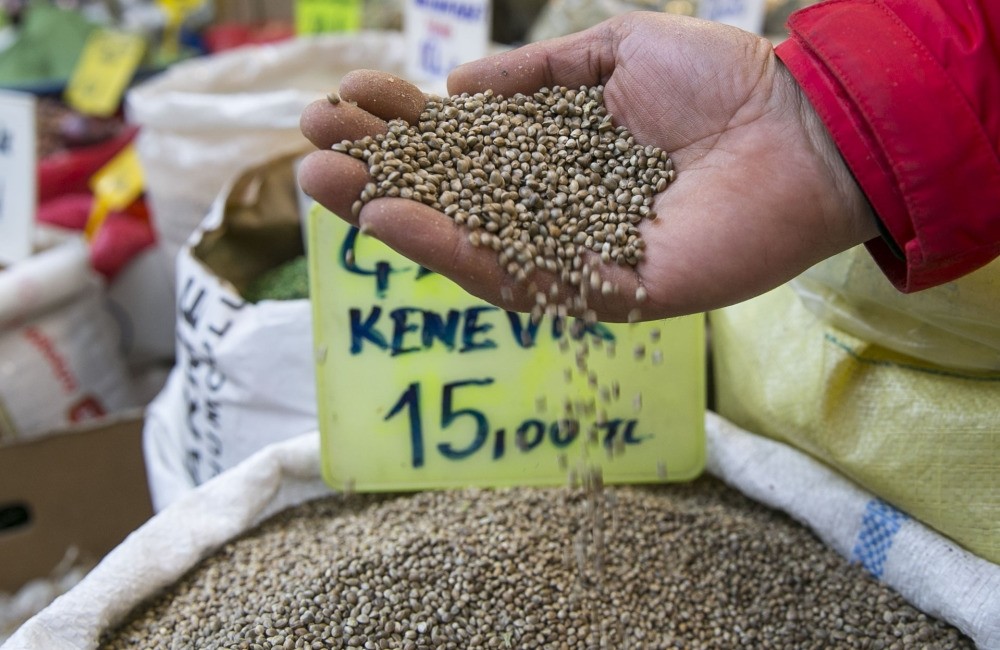 Cannabis cultivation is allowed only in 19 provinces in Turkey with legal supervision for the purpose of using its fiber and seed.
by Daily Sabah with AA Jan 23, 2019 1:13 am

To make the most of the industrial use of hemp following the re-emerging global trend, the government is shaping its agricultural policies accordingly and limiting the plant's harmful substance levels with scientific research

Agricultural policies for the cultivation of cannabis, which could be used as raw material from the automobile to textile industries, are being reshaped following an announcement last week by President Recep Tayyip Erdoğan that Turkey will exponentially increase the production of industrial hemp. The cultivation of cannabis has been slumping worldwide since the 1990s with growing focus on its industrial use. In 1990, cannabis was cultivated on an area of 156,000 acres, which fell to nearly 65,000 acres in 2017. Nearly half of the 69 cannabis types cultivated in Europe have been developed in the last decade. Most of these different types of cannabis have been the industrial hemp embodying a low amount of marijuana's active substance, tetrahydrocannabinol (THC).

The substance is distilled with rehabilitation and the rate of THC has fallen to 0.2 to 0.3 percent of the gross weight of cannabis.

The upper THC limit for industrial cannabis in Canada is set at 0.3 percent and 0.2 percent in the European Union. As a result, cannabis fields are on the rise in the European and American continents.

Europe was expected to grow over 125,000 acres of hemp in 2018, supplying the car composites market, according to a report of the British Hemp Association.

Canada is estimated to cultivate around 250,000 acres, and now has the first industrial-scale bio-plastics facility. China has also been increasing its hemp output in the last years and reached 74,000 acres in 2017. The estimate for China was 150,000 acres in 2018.

The Turkish legislation bans cannabis cultivation apart from utilizing its fiber, stem and seed. Now, with the aim of expanding its industrial use, new types of cannabis with minimized THC levels will be cultivated.

The legal principles for the cultivation permit, necessary supervision and procedures to be implemented in unlicensed cultivation have been drawn up. A communiqué published in the Official Gazette in 2016 regulates cannabis cultivation in 19 provinces. Outside the permitted provinces and districts, cannabis cannot be cultivated in Turkey.

In this context, the Black Sea Region Hemp Research Guided Project (TAGEM / BÜGEM) was launched. The project will determine the adaptation of varieties with low THC content and widespread cultivation areas to the regional conditions. The efficiency and yield components of the local population, highlighted by the studies, will be identified.

In this direction, the application for registration of two industrial hemp varieties will be completed as a result of the studies carried out by the institutions affiliated to the ministry and the first domestic and national cannabis varieties will be added to the country's agriculture.

The Scientific and Technological Research Council of Turkey (TÜBİTAK) 1001 Project on the "Development of Genotypes with Low THC Content from Hemp Populations" is being conducted in collaboration with Ondokuz Mayıs University.

The project, which is a pioneer work for cannabis breeding under the conditions of the country, aims to determine the phenological, morphological and some technological characteristics of the genotypes obtained from the gene bank in the Aegean Agricultural Research Institute of the Ministry of Agriculture and Forestry and the village populations from the producers in the central Black Sea region. In this sense, in the presence of varieties with low THC content, hemp farming will increase in Turkey as in the world.

The project for "Improving Agricultural Techniques and Mechanization, Reducing Production and Processing Costs of Plants with Fiber-Producing Stems" is being carried out in partnership with the TAGEM-supported public-private sector.

Within the scope of the project, in case of obtaining natural fibers with low cost and acceptable quality from flax, hemp and nettle with the mechanization support, machines for their separation and processing will be developed. With the development of suitable cultivation technique and mechanization, it will be ensured that the cultivation areas of these plants will be expanded by decreasing the costs and increasing the yield per acre.

The results obtained from the project will be put into practice by the private sector and will contribute directly to production, producer, and industrialist (like textile, machinery) in terms of economic output.