Crisis-hit Argentine firms do everything to cut costs, except fire workers 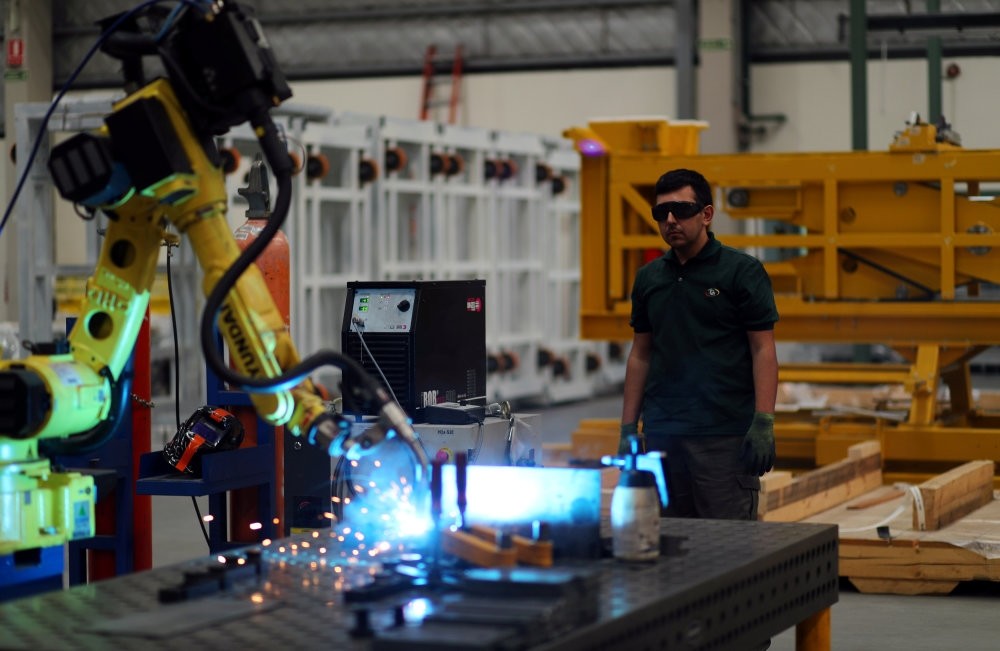 An employee stands as he operates a machine at industrial manufacturing company Gottert in Garin, on the outskirts of Buenos Aires, Argentina, Nov. 1, 2018.
by Jan 23, 2019 1:13 am

Businesses across crisis-hit Argentina are trying their best to find ways to cut their costs, all except firing their stuff, since the country has some of the world's most generous labor laws that could dramatically increase costs of the companies

Like many Argentine businessmen, Marco Meloni is doing everything he can to avoid laying off staff at his textile factory despite a slump in sales, more than 70 percent interest rates and soaring utility bills.

The reason? He doesn't have the money to fire anyone.

A little-reported and unusual feature of the economic crisis gripping Latin America's third-largest economy is the absence of many workers losing their jobs.

Small businesses, the biggest employer in Argentina, have been hardest hit by inflation that is nearly 48 percent, a tumbling peso, and major cuts to subsidies for public utilities that have sharply increased companies' operating costs. But the unemployment rate has barely budged from 9 percent.

Reuters interviews with business owners in textile, plastic, clothing and paint industries, government officials and union leaders show that many firms are adopting different strategies to try to survive until the economy begins to recover, which the International Monetary Fund expects to begin in the second quarter.

Firms are reducing working hours, halting production on some days, cutting shifts and making workers take their vacations now in anticipation of more customer demand once the economy lifts.

The workforce contracted by just 120,000 registered workers between October 2017 and October 2018, the latest government data reviewed by Reuters shows. That represents about 1 percent of the 12 million-strong labor force.

In contrast, the United States lost about 6 percent, or some 8.7 million people, of its workforce during the two years of the 2007/08 Great Recession as companies laid off workers to stay afloat.

Argentina has some of the world's most generous labor laws and they are making it more difficult for small business owners like Meloni to adapt to an economy now in recession. Typically in a tough economic climate a company might be expected to reduce its workforce to cut costs. But in Argentina taking that step could dramatically increase costs and potentially push a company into bankruptcy.

Introduced by successive populist Peronist governments since the 1940s, the labor laws make the country one of the most expensive in Latin America to employ, or fire, a worker.

Argentine companies are required to pay workers laid off a month for every year of service plus at least one additional month simply for informing them they are being fired. And crucially, there is no cap on how much a company needs to pay.

In contrast, neighboring Chile has a cap on severance pay. Layoff costs in Argentina are among the highest in the world, according to the World Bank's Doing Business project, which measures business regulations in 190 economies.

The Argentine labor laws have helped to contain what could have been a big increase in the unemployment rate. In addition, President Mauricio Macri, a free marketer who wants to reform the country's rigid labor system to encourage foreign investment, is taking steps to dissuade companies from firing workers.

He announced on Nov. 13 that companies must give 10 days' notice of any plans to lay off workers so that the government can help find ways to keep them employed. Macri wants to expand an existing program that helps to subsidize salaries of workers at companies that can show they are in financial straits. The government has not yet issued any regulations to enforce its announcement, so it is not clear whether companies are informing them of pending dismissals.

Like many small businessmen, Meloni has found himself caught in a vice. Sales from his plant in the town of Quilmes, 30 km (19 miles) outside the capital Buenos Aires, shrank by just over one third last year as Argentina's economy sank deep into recession.

"It was not a storm," said Meloni, a reference to how the country's president has described the economic crisis. "It was a tsunami. The tsunami kills." Meloni said the plant, which makes fabrics, used to operate 24 hours a day from Monday to Saturday but now just operates 16 hours a day, five days a week. Like many other businesses, Meloni advanced the holidays to his roughly 100 employees with the hope that once summer ends in March, demand will pick up. Daniel Funes de Rioja, the head of one of Argentina's biggest labor law firms, said a major issue for companies was the seniority of many workers. Many, especially in low-skilled industries, stay in the same job for years, so paying them severance becomes very expensive.

"There's a cultural custom for Argentines to remain in their jobs but also, as it has been always very expensive to fire people, that has extended the length of service of the workers in the companies," explained economist Camilo Tiscornia, from Buenos Aires-based C&T consultancy.

Production Minister Dante Sica said companies were also reluctant to fire workers because of forecasts showing an economic recovery around the corner.

"They prefer to suspend and not fire because of the cost of layoffs, plus the cost of hiring is costly," Sica said in an interview.

While workers are staying in their jobs they are earning less because of the shorter hours and fewer shifts. Some have resorted to taking second jobs, working for Uber, the ride hailing app, for example, according to anecdotal reports.

"We are not happy with these measures at all (fewer shifts, shorter hours), but the last thing we want is layoffs," said Jose Minaberrigaray, head of Setia, a textile workers union that represents 25,000 workers. "But we have to choose what is bad and what is worse," he told Reuters.

Macri has pushed for labor reforms to make it easier for companies to hire and fire, but his government has delayed implementing them after protests in December 2017. Sica, the production minister, has said they will try again in 2019 but it will be difficult to get political support for the reforms in an election year.

Tiscornia, the economist, said the difficulty in firing workers ultimately hurt the competitiveness of Argentine companies.

"Making it easier to fire people or to reduce salaries improves the economy efficiency and the companies' capacity to adjust to different situations," he said.

"In the U.S. it's tremendously easy to fire but at the same time they are at the lowest historic jobless rate because that market has very strong flexibility. That favors the creation of new companies. Here if you start a business and it doesn't work, you are stuck with the employees, so you don't even try."

At the metallurgical company where Pablo Mansur, 31, works, production has fallen 30 percent over the last 12 months. To keep busy, workers are painting, cleaning and doing repairs, Mansur said. Workers were also told to take their vacations in December, a period when production would be low any way because of public holidays. He said workers agreed to this because "we are aware of the reality. It is not a whim," he said.

Jorge Göttert, president of Göttert, a 75-year-old company that makes production line systems for the wood and auto sectors, says he has tried not to lay off workers because of his memories of what happened during the country's worst financial crisis in 2001.

Then, the company laid off half of its staff to try to survive. When the economy rebounded, however, it "became very difficult for us" as it took time to rebuild its workforce, training new workers to operate the specialized machinery.

"We think this crisis will be shorter this time."