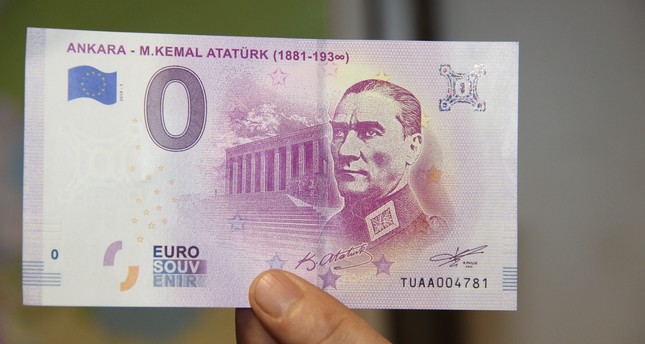 The European Central Bank has printed a new euro banknote featuring the portrait of Mustafa Kemal Atatürk, Turkey's founder, first president and the leader of the country's Independence War.

Printed as a result of the works carried out by the Turkish collector Özgür Honaş and his colleagues and intended to be used in tourism to promote Turkey and its brand value, this banknote bears the quality and properties equivalent to the euro used in the market.

Saying 5,000 copies were printed, Honaş said that this series will not continue and that they are planning on issuing a series of banknotes featuring the portraits of presidents as their next project.

After completing his studies on the subject, Honaş will submit this project to President Recep Tayyip Erdoğan's approval.

Honaş, who has been engaged in numismatics, the study or collection of currency, including coins, tokens, paper money and related objects, for years, explained the money printing process in detail.

"One evening, one of my friends (Ibrahim Gölgeli) called me and said, 'I live in Europe. The European Central Bank prints this kind of money, and I want to be a pioneer in this regard. Will you help?' and I agreed. But I found it strange and thought why the European Central Bank would print our money. Later on, I did a preliminary study."

Recalling that he was worried at first about the possibility, Honaş said the banknote was designed by a Dutch designer - Christian Petermann. "In the following process, we finalized the banknote and waited for the printing calendar. Shortly after the delivery, we received the pre-approval from the European Central Bank on the issuance of the banknote. Three weeks later, the money was issued," he added, underlining that the banknote will be used in tourism.

"It is a kind of commemorative banknote," he continued. "In different countries, they are doing such practices for promotion. We wanted to issue an Atatürk-themed banknote in this regard."