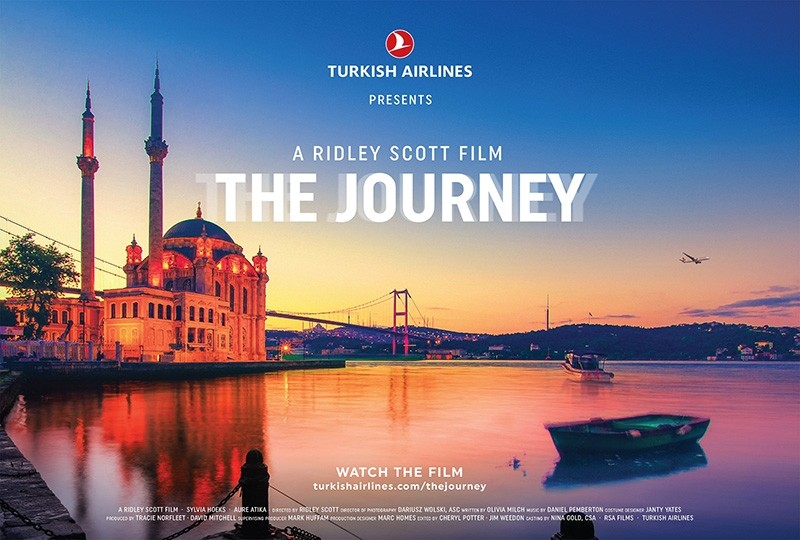 Airing during the world's most-watched sports event – which some watch solely for the creative commercials from the top brands – the 30-second version of the six-minute short film called "The Journey" showcased the Turkish flag carrier and the beauty of Istanbul.

The commercial features a chase through Istanbul, highlighting sunny Bosporus-side vistas and historic sites less well-known than the iconic views of the Golden Horn and Sultanahmet Square.

"When viewers tuned into the Super Bowl on Sunday they were treated to a stunning portrayal of Istanbul in this thrilling film from Ridley Scott," said Turkish Airlines (THY) Chairman Ilker Aycı.

The film – starred by actresses Sylvia Hoeks and Aure Atika – features historic Istanbul neighborhoods and monuments including the Ortaköy district, Çırağan Palace and Galata Tower, as well as cultural treasures like Turkish coffee and Turkish tea.

"We invite travelers around the world to join us on our journey and experience true Turkish hospitality at our brand-new home, Istanbul Airport," Aycı added.

The full-length version of the short film was broadcast on the airline's YouTube channel simultaneously with the abbreviated Super Bowl version.

Meanwhile, anyone traveling Sunday evening on one of Turkish Airlines' long flights with internet was able to watch the match-up live between the New England Patriots and the Los Angeles Rams.

As the first Turkish brand to advertise at the Super Bowl, Turkish Airlines has been delighting audiences with its inspiring, original commercials since 2016.

Producer-director Scott said of the "Journey" TV ad – the first one he has shot in 15 years – "Istanbul is an inspiring city to build a story around with its beautiful topography surrounded by water."

"The city is a powerful backdrop to the story that brings together the main characters in an exciting and spectacular way, much as Istanbul has done for generations," he added.

Renowned for his critically acclaimed films such as "Alien" (1979), "Blade Runner" (1982), "Thelma and Louise" (1991) and "Gladiator" (2000), Ridley Scott took the director's seat with the THY advert for the first time in 15 years. The four-time Oscar nominee, British filmmaker has about 2,700 commercials including noteworthy projects designed for some world-famous brands.

Centering on Istanbul's iconic landmarks, such as Çırağan Palace, Theodosius Cistern, Ortaköy Square and Istanbul Airport, the ad also features some Easter eggs in relation to Scott's previous films. Shot over four days, this film has four different versions in addition to the six-minute short film and the behind-the-camera footage narrated by Scott himself.

"Journey showcases Istanbul as the hub of Turkish Airlines and the new center of aviation for global travelers, which will be the world's largest aviation hub with an annual capacity of 200 million passengers," said the airline.

"Flying to more countries than any other airline, Turkish Airlines currently connects 306 destinations in 124 countries, which will expand as it moves its hub from the current Istanbul Ataturk Airport to the newly opened Istanbul Airport," it said.

Istanbul Airport, whose first phase officially opened last Oct. 29 – the 95th anniversary of the founding of the Turkish Republic – once completed represents an $11.6 billion investment.

At full capacity – with the completion of all four phases with six runways – Istanbul Airport is set to become a global aviation hub hosting more than 100 airlines and flights to over 300 destinations around the world.

Flights to the U.S. come to the fore among the most important passenger markets of Turkey's flag-carrier airline. Flying to nine destinations in the U.S., including New York, Los Angeles, Washington, Boston, Houston, Chicago, Miami, Atlanta, and San Francisco, THY will soon schedule flights to Newark, New Jersey, which stands out with its flight potential.

THY's occupancy rate on flights to North America, including two destinations in Canada, rose by 5.3 percentage points to 88.9 percent, while the number of passengers climbed by 9.1 percent to 2.4 million in 2018 compared to the previous year.

The commercial for THY is the first ad Scott has directed after an 18-year break. The three-time Academy winner also directed Apple's legendary Super Bowl commercial in 1984.

The airline was named Best Airline in Europe by Skytrax for six years in a row between 2011 and 2016, and was chosen the Best Airline in Southern Europe for the ninth consecutive time in 2017.

This year, the company aims to carry 47 million passengers on international routes.