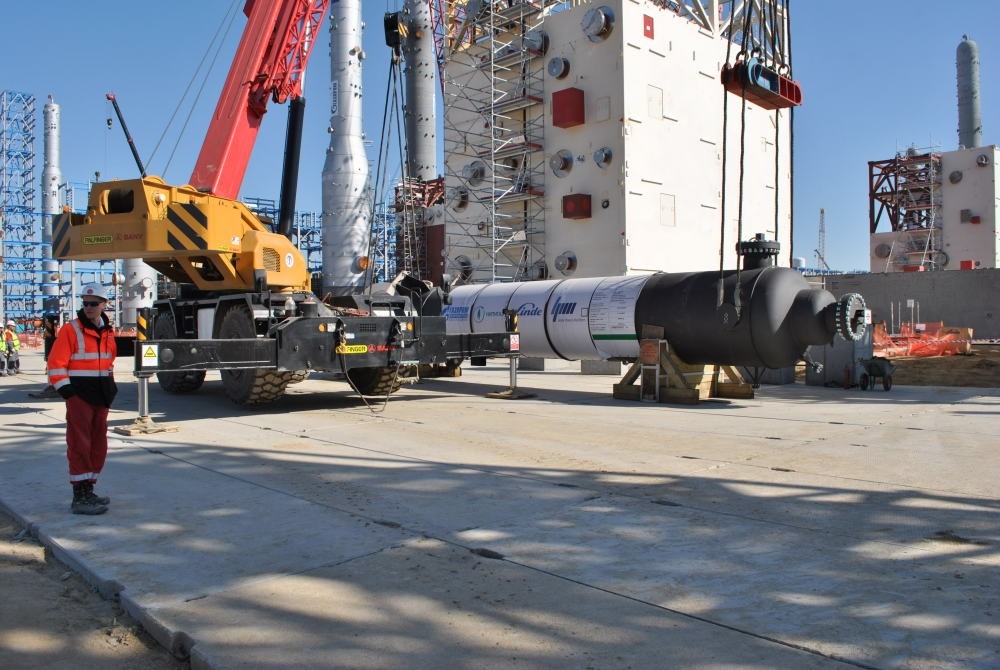 Major Turkish construction firm Ru00f6nesans Holding last year started building the Amur Gas Processing Plant (GPP) near Amur region, which will be the largest such plant in Russia and one of the biggest in the world.
by Daily Sabah Feb 06, 2019 12:06 am

After the normalization of ties with Russia, the country has once again become the leading foreign market for Turkish contractors, with more than 20 percent of their overseas projects being realized there last year

In 2018, Russia resumed its position as market leader in overseas contracting services carried out by Turkish contractors, which achieved $19.9 billion in overseas projects in the said period. Overseas contracting services have assumed a strong climb to between $20 billion and $30 billion. The sector aims to get a 7 percent share from the global construction market, which is expected to be around $700 billion by 2030. The Turkish Contractors Association (TMB) has published its "Is the World Re-Forming as We Enter 2019" analysis that is being closely monitored by all economic circles and the sector. The analysis evaluated all data related to the construction sector as well as the global and national economy.

Turkey has started to benefit from the increasing interest of foreign funds with the great effect of the perception that the U.S. Federal Reserve will not increase interest rates as rapidly as expected, according to the report, which said that with its experience in crisis management and the flexible private sector, the Turkish economy is expected to overcome this challenging process.

In the report, it was noted that Russia at 20 percent, Saudi Arabia at 15.5 percent and Qatar at 10.4 percent dominated the top three in Turkey's contracting services last year. "After the normalization of relations, Russia has resumed its position as the market leader in the last year's overseas contracting services. It is estimated that it will be possible to approach an average of $5 billion to $6 billion in projects annually - the amount achieved in the 2012-2015 period with Russia," it said.

Touching upon the performance of overseas contracting services in recent years, the report further explained that overseas contracting services reached the highest level with $30 billion annually in the 2012-2015 period. However, due to the political and economic developments around the world, the decline in oil prices and the impact of the crisis with Russia, this figure dropped to $14 billion to $15 billion in the 2016-2017 period; it is currently moving toward an annual project amount of $20 billion to $30 billion.

Turkish contracting companies undertook some 261 overseas projects last year. Since the day they opened abroad in Libya in 1972, contracting firms have reached a size of $378.9 billion abroad. The sector has undertaken close to 9,600 projects in 123 countries. The projects undertaken since 2002 amounted to $329.1 billion in total.

According to the data of the Engineering News Record (ENR), regarded as a reference in the world, the global construction market, which was stagnant as one of the sectors most affected by the economic uncertainty in the previous period, turned up the momentum in 2017, increasing by 3.1 percent to $482 billion. The size of the international contracting market is expected to rise to $700 billion in the 2030s.

For the 100th anniversary of the republic, the sector's primary target is to undertake overseas projects worth $35 billion in the global market by forming a leading Turkish contracting brand in the region. In the 2030s, it is aimed to increase the share of Turkish firms in the international market to 7 percent, meaning $50 billion per year.

There are many factors that will affect the construction market in the coming period, led by the course of the energy prices and the investment environment and financing conditions in the markets, such as Saudi Arabia and Algeria, in which the Turkish companies have strong references.

The Russian Federation and Iraq will maintain their importance for the sector in 2019, the report said. It also noted that the government, which was established at the end of last year in Iraq, has signaled the beginning of a positive period due to the importance given to improving the quality of life and the reconstruction of the country; although some ministries have not yet been appointed.

Developments in this direction and overcoming existing security problems will enable Turkish firms to undertake projects once again in Iraq, mainly in Baghdad and its surroundings and the Basra region. Meanwhile, this situation may lead to the fact that the Iraqi side will pay their existing debts owed to Turkish contracting companies that will in turn complete their current projects in the region. Therefore, the reconciliation of peace and stability in Iraq and Syria is of great importance for the "peace economy" in the region.

Turkish contractors are closely following potential markets such as sub-Saharan Africa, India, the Association of Southeast Asian Nations (ASEAN) region and Latin America for new opportunities abroad. In Africa, the center of attention for many countries, there are many project opportunities, and the favorable outlook for Turkish companies in the countries of the region makes Turkish contracting firms advantageous, the report read.

In the meantime, it is observed that the problem of letters of guarantee and the counter-guarantee has accelerated in a number of markets. The TMB stressed that the effective introduction of the Turkish banking system and Turkish banks should be done as soon as possible by taking steps to ensure the direct acceptance of the letters of guarantee to be received from Turkish banks in these markets and bringing the issue to the agenda in official meetings. It is also expected that the existing state-owned Türk Eximbank support will be developed to meet the financing needs of the contractors The analysis also pointed to the growth of the construction sector, which has served as a locomotive of growth in recent years. It noted that the industry contracted by 5.3 percent in the third quarter of 2018. In the first nine months of 2017, the economy grew by 7.3 percent and the construction sector by 9.6 percent. "While the economy grew by 4.7 percent in the same period of 2018, the growth in the construction sector remained at 0.8 percent. This table shows a sharp contraction has begun in the construction sector," the report concluded.