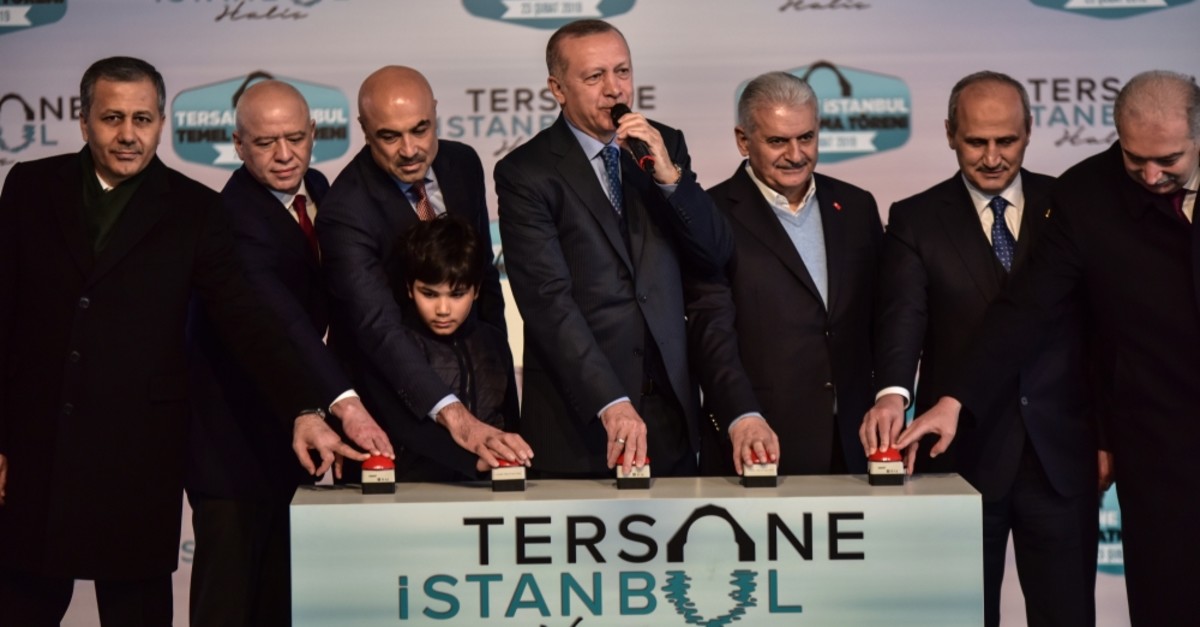 President Recep Tayyip Erdou011fan and other officials attended the groundbreaking ceremony for the Tersane Istanbul project at Istanbul's historic Haliu00e7 Shipyard, Feb. 23, 2019.
by Daily Sabah with AA Feb 25, 2019 12:06 am

Once opened, the giant project Tersane Istanbul will increase the brand value of Istanbul and positively contribute to the country's tourism revenue

The project, Tersane Istanbul, will positively contribute to Turkey's tourism revenues, President Erdoğan told the audience at the shipyard on Istanbul's European side.

The project will be carried out under a build-operate-transfer (BOT) model on an area of 238,000 square meters.

Erdoğan remarked that the project would increase the brand value of Istanbul. After completion of the project, Erdoğan said it would be the largest science center in Europe. Around 30 million people - local and foreign - are expected to visit Tersane Istanbul annually when it is opened he added.

"The project will not only increase the brand value of Istanbul. It will also make a positive contribution to Turkey's tourism revenue," he said.

Erdoğan said the first phase of the project is expected to open in November 2020. He noted that the project would feature three museums, including Turkey's first women's museum and the Sadberk Hanım Museum, which will be moved from Istanbul's Sarıyer district to the new location, and a Turkish-Islamic arts museum.

As part of the project, two yacht ports with a capacity for hosting 70 yachts and three 5-star hotels with a total of 1,200 beds will also be constructed.

The project will also include office buildings, stores, restaurants and a

mosque with a capacity for 1,000 people.

"The investment period for this project is three years, but in November we will open the part that we can call the first stage. The operating period is 49 years together with construction. The government will receive $1.346 billion, plus VAT income as rent from the Istanbul Tersane Project, whose tender price is TL 1.429 billion. Moreover, with the added value that the project will create for the Golden Horn and Istanbul, the income of our country will further increase," Erdoğan said.

He also noted that it would provide employment for 60,000 people, including 15,000 direct and 45,000 indirect jobs when it becomes operational, indicating that it will provide jobs for 4,000 people during its construction phase.

The science center is expected to have "a technology center with an international reputation, a digital thematic library and innovation center, training programs, workshops and science activities."

The Haliç Shipyard was established in 1455, two years after Istanbul was conquered by Sultan Mehmet II.