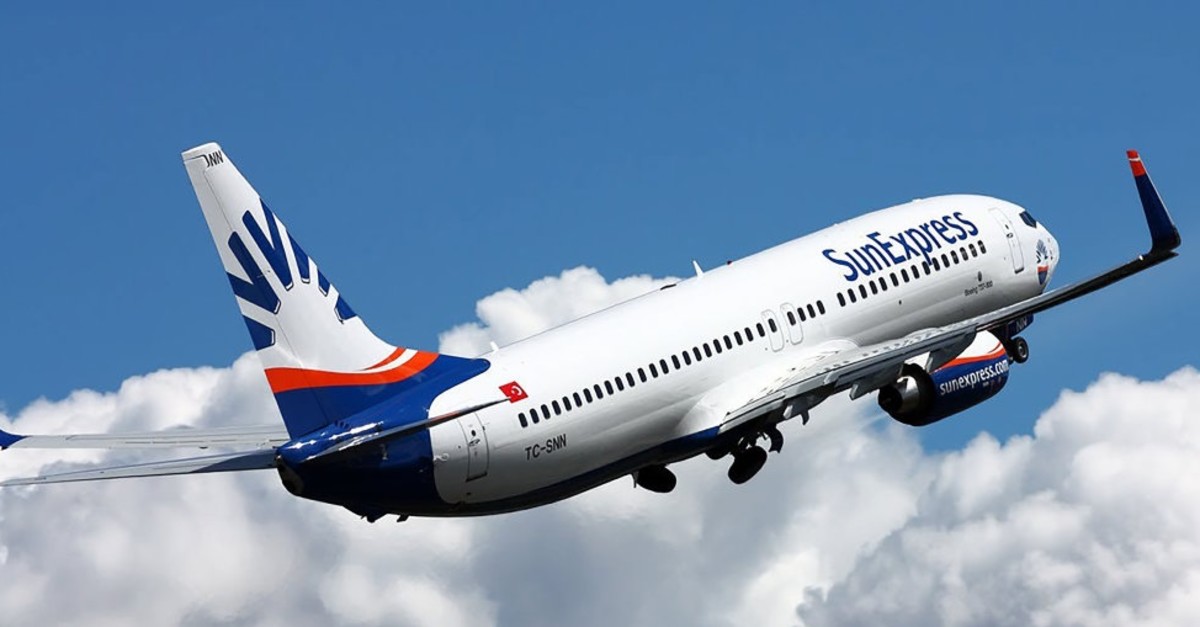 SunExpress, a joint venture of national flag carrier Turkish Airlines (THY) and German airline Lufthansa, captured the highest revenue and growth figures in its history in 2018.

The carrier grew by 10 percent last year compared to the previous year and generated a revenue of approximately 1.3 billion euros ($1.48 billion), it said in a statement yesterday. The number of passengers the company carried in 2018 reached 10 million, up 10 percent year-on-year, while the load factor stood at 84 percent.

Stating that SunExpress has continued its steady growth with its strong financial structure for two years in a row, SunExpress CEO Jens Bischof said, "In 2018, we achieved a substantial growth in international capacity of approximately 10 percent compared to the previous year by recording the highest revenue in our history, with a total of approximately 1.3 billion euros... With our strong financial structure and expertise as a leisure carrier we will continue to be the backbone of air travel for the Turkish tourism industry in 2019."

With the vision of creating an air bridge between Turkey and Europe, SunExpress offers a record capacity of 6.6 million seats from Central Europe to Turkey in 2019, the carrier said. Most of the 2019 record capacity increase of more than 20 percent will be achieved with additional flights between Turkey and Europe. Bischof further stated that "we are the airline carrying the most number of tourists to the Mediterranean and Aegean regions with scheduled flights. In addition, we directly connect a record number of Anatolian cities to Europe. This summer, we will operate scheduled direct flights to 36 destinations in Europe from 16 cities in Turkey."

The carrier, which connects Turkey's holiday resort Antalya with the most international destinations with direct scheduled flights, is now also offering the most number of seats in the company's history to the city.

As Turkey's tourism capital and SunExpress' hub, Antalya will be served with 3.7 million seats during the summer of 2019. "Initially, we planned 3.5 million seats of capacity to Antalya from Europe. However, due to the growing demand, we increased our capacity to 3.7 million with almost 200,000 additional seats," said Bischof.

This year, SunExpress flies to four new cities from Antalya: Oslo in Norway, Gothenburg in Sweden, Eindhoven in Netherlands and Prague in the Czech Republic. During the summer of 2019, the airline will fly to a total number of 36 international destinations from Antalya.

Pointing out that since starting its İzmir operation, SunExpress has continuously grown and become a major contributor to Izmir's tourism sector, Bischof then added, "We also offer connections from many cities of Anatolia to Europe via İzmir. Our new international destinations from İzmir this summer will be Eindhoven in the Netherlands, St. Petersburg in Russia and Marseille in France. With these additions, we bring our offer of international destinations from İzmir to 32."

Stating that SunExpress will have the largest fleet in its history with 83 aircraft in 2019, Bischof added, "The first five Boeing 737 Max-8 aircraft of the 32 ordered, for delivery between 2019 and 2024, will join our fleet this April and May. We will also receive three Boeing 737 Max-9 aircraft for SunExpress Germany as well as eight additional Airbus A320 to be placed into service on international flights departing from Antalya.

In 2018, SunExpress was selected as the Best Leisure Airline in Turkey and the World's Fifth Best Leisure Airline, said Bischof, adding, "We are also the second-largest service exporter in Turkey by flying to 90 destinations in more than 30 countries. As a Turkey specialist in Europe, we work with the largest European tour operators and travel agencies. This record capacity increase achieved by SunExpress for the year of 2019 is an important indicator of the expected growth in Turkish tourism. We expect that 2019 will be a year of records for Turkish tourism."