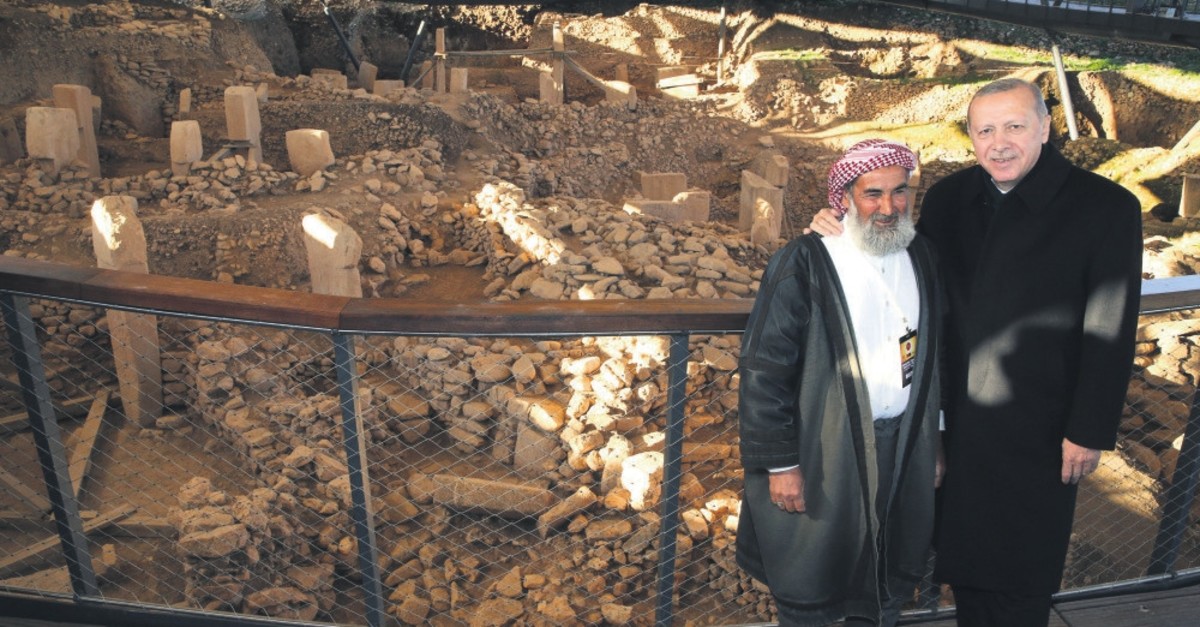 Göbeklitepe has a profound significance as the oldest temple and settlement in human history. Turkey's 18th treasure in the UNESCO World Heritage list is also expected to pave the way for others while contributing to regional tourism

The birthplace of civilizations and the world's oldest temple site, Göbeklitepe was officially opened on Friday at a ceremony attended by President Recep Tayyip Erdoğan, seen above with Mahmut Yıldız, the 66-year-old owner of the land the archaeological site sits on. Dubbed the "zero point of history," Göbeklitepe is considered a true embodiment of humanity's heritage, and is recognized as such in UNESCO's List of Heritage Sites.

With particular emphasis on the importance of Göbeklitepe for the history of the humankind, President Erdoğan stressed that the ancient site is of great importance to human history.

"Göbeklitepe has already become a significant reference to show the depth of the Anatolian civilizations since it has made huge contributions to the common cultural treasures of humankind," Erdoğan said and pointed out that the site is the homeland of humanity.

In a bid to promote one of the world's most important and ancient archaeological sites and in honor of the 12,000-year-old Neolithic-era temple – located in Turkey's southeastern province of Şanlıurfa – the government has declared 2019 as the year of Göbeklitepe, President Recep Tayyip Erdoğan previously announced in December 2018.

The declaration of 2019 as the Year of Göbeklitepe is expected to boost Turkey's tourism to a great extent and revive the region. Since its inclusion in the UNESCO heritage list, the site has already seen an influx of local and foreign tourists.

Göbeklitepe has so far attracted more than 1 million visitors with special accommodation packages and the number of visitors has exceeded 5 million. The marvel is expected to attract more attention in the upcoming year since the excavations will continue in the region, shedding more light on the history of world civilization.

Promotional activities at international fairs, conducted mainly by the Culture and Tourism Ministry, the Şanlıurfa governorate, Şanlıurfa Metropolitan Municipality and by representatives from the tourism sector, have boosted the interest in Göbeklitepe.

During his speech at the official opening ceremony, President Erdoğan also said that many of Turkey's ancient sites are included in the UNESCO list. With the addition of Göbeklitepe, currently 18 ancient sites in Turkey are included in the list while 77 sites are on the tentative list. The president stressed that the number will continue to rise in the years to come. The president also narrated the story of how the site was discovered, when a farmer in the region was ploughing his field.

The most concrete findings at the archaeological site, which was noticed by researchers from Istanbul and Chicago universities during surface surveys in 1963, emerged in 1986 when a farmer found a statue while working in his field.

Considering that the stone he found was valuable, the farmer acted responsibly and handed this statue to the Şanlıurfa Archaeology Museum. The sculpture, which was not understood at first, was taken under protection in the museum. German professor Dr. Klaus Schmidt, who later came to the city to carry out excavations in Nevali Çori, Hilvan, and saw the findings in the museum, started a detailed study thinking that these sculptures were important. With the permission from the Culture and Tourism Ministry's General Directorate of Cultural Heritage and Museums, the German Archaeology Institute and the Şanlıurfa Museum started excavation works in the site under the chairmanship of Schmidt in 1995. Excavations unearthed "T" shaped obelisks with wild animal figures of three to six meters in length and 40 to 60 tons in weight belonging to the Neolithic period.

Vice President Fuat Oktay also drew attention to the high tourism potential of Göbeklitepe and stressed that the campaigns and programs of the Culture and Tourism Ministry will certainly promote tourism in other ancient southeastern Turkish cities, including Gaziantep, Adıyaman, Diyarbakır and Mardin.

"Göbeklitepe has changed how we have come to narrate history. It led to the reinterpretation of the world history," Oktay said.

Speaking at the opening ceremony, Industry and Technology Minister Mustafa Varank mentioned a project run by his ministry. Run in cooperation with Turkish Industry and Technology Ministry and European Union Turkey Delegation, the project of "History Rises Again in Şanlıurfa" aimed to preserve the ancient site. As part of the project, 10 million euros was spend and 8.3 million euro of that amount was allocated to Göbeklitepe. The site is protected by membranes manufactured with nanotechnology, which enables the membrane veil to renew itself. The steel construction roof of the Göbeklitepe site functions as a lightning rod. The ancient marvel Göbeklitepe stands out among other archaeological sites, dating back 12,000 years, circa 10,000 B.C. Excavations at the site were launched in 1995 by German professor Klaus Schmidt, who brought to life the previously-unearthed finds that have long caused a stir among academics.

According to UNESCO, Göbeklitepe was the meeting place of the last hunters before humans switched to a lifestyle based on agriculture. "Göbeklitepe is a unique sacred space and sacred meeting point of the Neolithic period in terms of its location, dimensions, dating and monumentality of architectural ruins and sculptural pieces. There are other settlement areas dating back to the same period as Göbeklitepe. Meanwhile, a mock-up version of the ancient marvel will be exhibited at the world's largest real estate fair MIPIM 2019 to be held in the French province Cannes on March 12-15.