Turkey ranks second in Europe in number of exhibitions 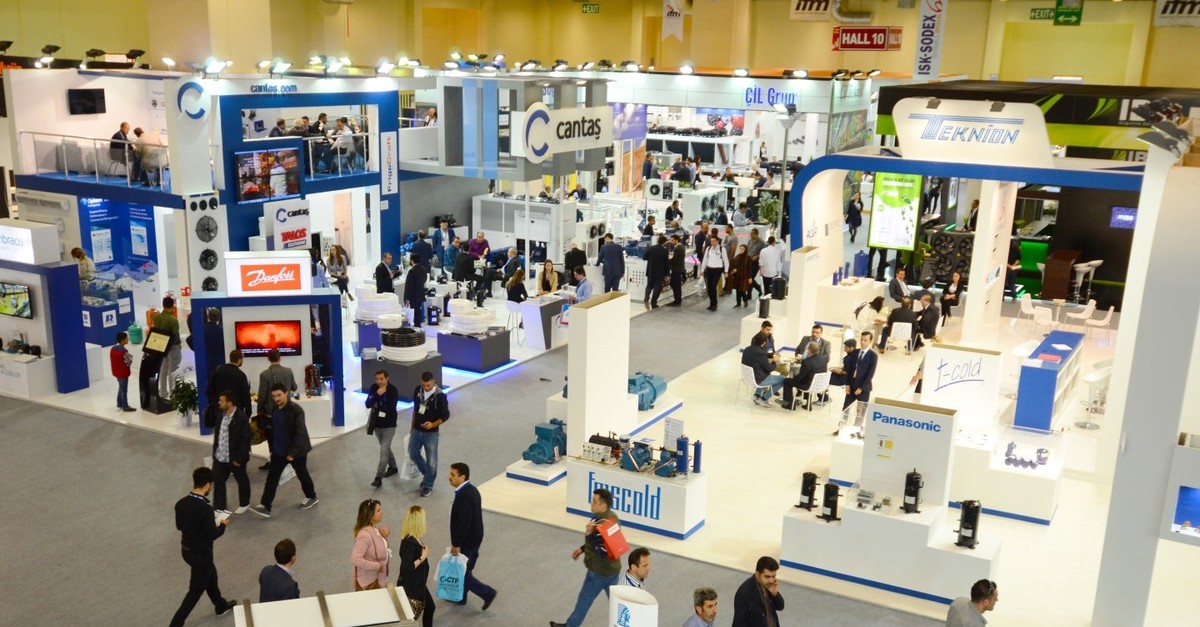 Turkey ranks eighth in Europe in terms of size of the exhibition area and has a 3.8 percent share, while in terms of quantity, it ranks second with 400 exhibitions per year, according to data by the Global Association of the Exhibition Industry.
by Daily Sabah Mar 14, 2019 12:37 am

With an average of 400 exhibitions, Turkey ranks second in Europe in number of exhibitions held per year and has experienced growth in the industry in recent years. However, it still lags behind in terms of the number of participants and revenue

While Turkey ranks second in Europe in the number of exhibitions, it lags behind the continental average with regard to the number of participants, rental stand areas and income gained. An average of 2,000 exhibitions are held annually in Europe, led by France, Turkey, Spain, Poland and Germany.

The Competition Board prepared an Exhibition Industry Analysis Report that analyzed data related to 5,276 exhibitions in the 2005-2017 period to determine competition problems in the sector and to develop solutions.

According to Global Association of the Exhibition Industry (UFI) data, as of 2017, Turkey ranks eighth with a 3.8 percent share of exhibition area and second in quantity with 400 exhibitions year-on-year.

While an average of 2,000 exhibitions are held annually in Europe, France takes the lead in the number of exhibitions, followed by Turkey, Spain, Poland, Germany and Italy.

Although the number of annual exhibitions in Germany, regarded as an exemplary country in the sector, is approximately half that of Turkey, around seven times more revenue is generated by exhibitions in this country. Stand rental costs in Turkey that are below the world average is one of the reasons for this situation.

These findings indicate that a country that wants to increase its international competitiveness in the exhibition industry and the players operating in that sector should not just focus on the size of the exhibition area and the number of exhibitions, they should develop policies to effectively use the exhibition areas and increase the quality of the fairs.

In his speech at the "Introduction and Evaluation of Competition Authority Sector Inquiry Related to Exhibition Industry" at the Istanbul Chamber of Commerce (İTO), Ömer Torlak, head of the Competition Authority, said that the exhibition industry provides employment and income opportunities directly and indirectly. He also said exhibitions contribute to urban growth, export and promotion of the country.

Since Turkey has an important potential related to the exhibition industry, Torlak said: "It is estimated that the annual average growth rate of the global exhibition market will be 5 percent. That rate is above the annual average growth estimation for global gross income." He noted that the most important source of the estimated growth in the exhibition sector is developing countries. He indicated that exhibition organizers active in the international field are heading toward growing markets via geographical adaptations and acquisitions, which is an indication of that fact.

Torlak said that according to calculations based on parameters such as actual exhibition numbers, participant numbers and rented booth areas, Turkey's share of the global exhibition industry is approximately 1-1.5 percent. "However, considering the income from exhibition organization activities, our share is unfortunately very low. One of the reasons for this is that booth rental fees are generally very low compared to the global average," he added.

In his address at the meeting, İTO Chairman Şekib Avdagiç said the biggest exposition center in Istanbul ranks 38th, and exhibition areas in Istanbul are not sufficient. "Istanbul needs an exposition area of 250,000-400,000 square meters. We are in second place in Europe with respect to exhibition numbers. However, we are in eighth place with respect to income from exhibitions. There is a contradiction here." Avdagiç said.

3 out of 4 international fairs held in Istanbul

According to the Union of Chambers and Commodity Exchanges of Turkey (TOBB), there are 33 exhibition centers in 20 provinces in Turkey with a closed area of over 5,000 square meters. Some 38 percent of these exhibition centers are located in Istanbul.

Approximately 75 percent of the international fairs in the 2008-2017 period were held in Istanbul, followed by İzmir, Konya, Bursa and Antalya in exhibition area and by Ankara, İzmir, Bursa and Antalya, respectively, in the number of fairs.

According to the distribution of exhibitions by topic, agriculture, greenhouse cultivation, animal husbandry and technologies led the way in the period of 2008-2017 with 467 fairs, followed by heating, cooling, ventilation, natural gas and systems with 363 fairs and education, related equipment and technologies with 349 fairs.