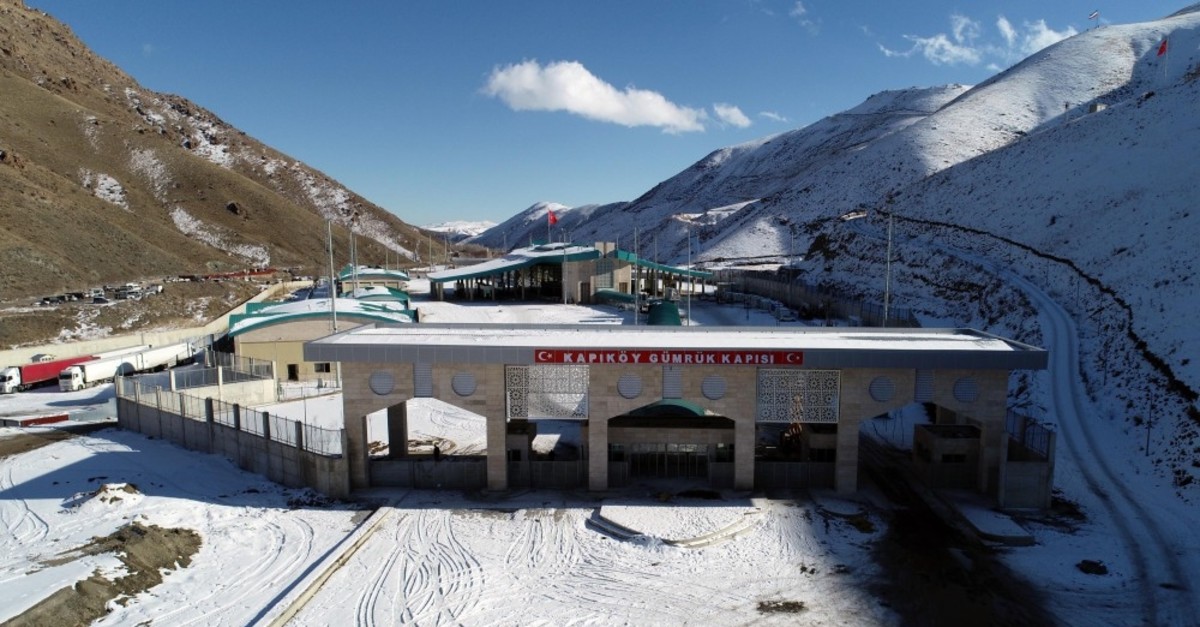 The customs area at the Kapu0131ku00f6y Customs Gate has been increased to 70,000 square meters and it is equipped with the latest technology x-ray and transition systems.
by Daily Sabah Mar 20, 2019 12:17 am

The newly opened modernized Kapıköy Customs Gate will have an important place in the development of economic and commercial ties of Turkey and Iran, and will contribute to regional trade and tourism

The Kapıköy Customs Gate, the foundation of whose modernization was laid in the eastern province of Van over two years ago, was opened in a ceremony Monday. The customs gate is poised to yield positive results for the whole region, contribute to regional trade, primarily to trade with Iran in Van, which has the longest border with that country, as well as to regional tourism. In her speech at the opening ceremony, Trade Minister Ruhsar Pekcan said around 2 million people passed through Turkey-Iran land border gates last year, emphasizing that this figure will increase, especially with the completion of modernization of the Kapıköy Customs Gate.

The Kapıköy Customs Gate, connecting Van, which is 90 kilometers from the city center and the Iranian city of Khoy, is on an area of 70,000 square meters, including open, closed and green areas.

The customs gate has all of the up-to-date equipment needed at customs gates, such as modern passenger entry and exit platforms, administrative services buildings, other buildings, a smuggled goods warehouse, a search hangar and X-ray scanning systems.

Turkey continues friendly relations with neighbor Iran in all areas, the minister noted, saying that they have accelerated modernization of land border gates in the in the recent period.

She remarked that Turkey aims to strengthen the stability in the region by further developing cooperation mechanisms through joint projects with Iran, suggesting that the cooperation between the two countries on customs and trade issues will yield positive results for the whole region.

"The number of people passing through the Turkey-Iran land border gate will increase further especially with the completion of modernization of Kapıköy Customs Gate. This also means the increase in tourism revenues. Van is a city where trade is very active. To reach the $30 billion trade volume target set by our president, the modernization of Razi Land Border Gate and Razi- Khoy road must be completed by Iran, we must accelerate it," Pekcan said. The Kapıköy Customs Gate, which connects Asia and Europe, is located on the China-Europe Trade and Transit Corridor, which is considered as the "silk road" of the future, Trade Minister Pekcan noted, emphasizing that the modernization of this place is an important step towards the development of the route.

The minister also pointed out that the gate will contribute to the increase of exports to Central Asian countries and passenger capacity.

In his address at the ceremony, Islamic Republic of Iran's Khoy Governor Mohammed Abedi stressed that the Kapıköy Customs Gate will have an important place in the development of economic and commercial ties of the two countries.

"Iran is working on the road infrastructure. We are making efforts to complete the necessary installations on the Iranian side," Abedi said.

Also speaking at the ceremony, Van Governor Mehmet Emin Bilmez pointed out that the Kapıköy Customs Gate was one of the most modern gates. Bilmez remarked that they expect the number of tourists coming to Van from Iran to exceed 500,000 this year.

Rifat Hisarcıklıoğlu of the Union of Chambers and Commodity Exchanges of Turkey (TOBB) noted that an important step was made to connect Van and Turkey to Iran and Asia more strongly, adding that they aim to turn the trade route again to this geography.

Hisarcıklıoğlu stated that Kapıköy and Van will regain their former glory and become a trade and tourism center.