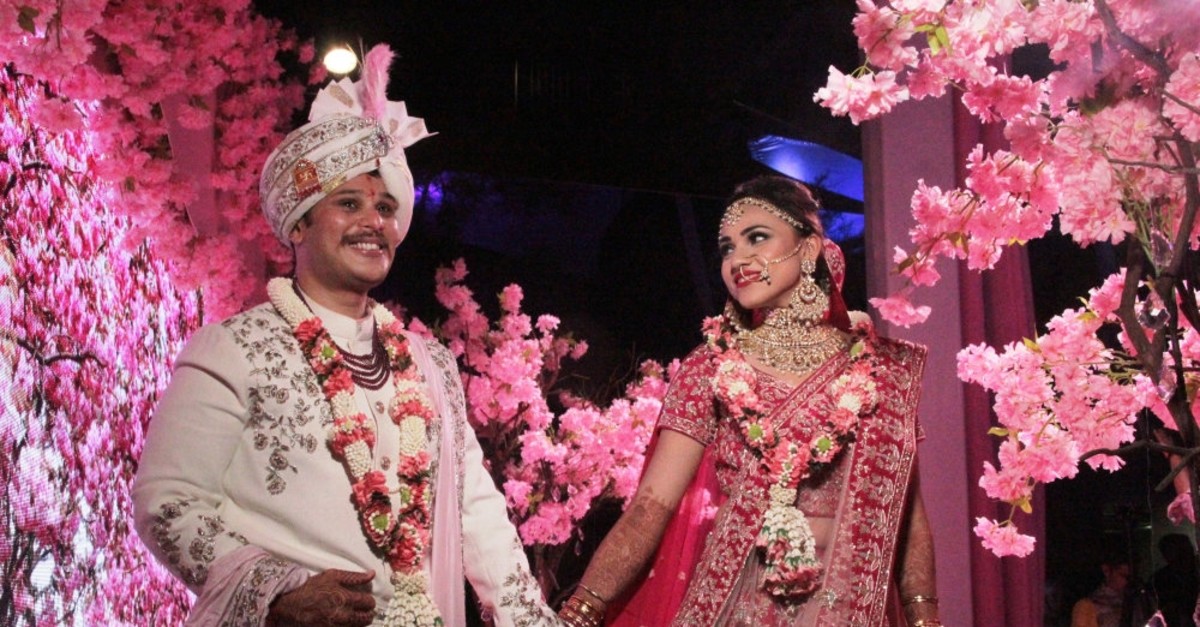 An Indian couple at their wedding in the Turkish resort town of Bodrum in the southern Aegean region in the summer of 2018.
by Daily Sabah with AA Mar 27, 2019 12:06 am

World-renowed resort towns in Turkey's southwest are the top choices for high-end Indian weddings as of late. These resort towns offer the lux exprience perfect for Indian couples and their large extended families

Indian couples to be married have been enjoying splendid wedding ceremonies in the summer breeze of Turkish resort cities and towns like Bodrum and Antalya, located in the country's southwest, for the last few years and it seems that this season will see more magnificent Indian-style weddings.

Tourism professionals in Muğla, one of the most prominent tourist spots in Turkey, anticipate that the region will see a dynamic season in terms of Indian weddings this year.

Hotels serving various parts of Bodrum, the world's favorite holiday resort, will host Indian weddings this year as well. In order to make Indian guests feel like they are in their own country, tourism professionals are striving to provide all kinds of opportunities for them.

In a statement to Anadolu Agency (AA) published yesterday, Bodrum Hoteliers Association (BODER) Secretary-General Orhan Kavala said that Indian weddings have been held in Bodrum for a few years now.

Underlining that these weddings bring considerable invigoration to the economy and the tourism sector, Kavala stated that Bodrum is an ideal place for Indian weddings. "It is one of the most ideal places in terms of both physical conditions and services, which can satisfy all of their wedding-related needs," he said.

Indicating that groups coming to Bodrum in recent years left the province pleased, Kavala continued, "We now see the fact that Indian weddings will continue to increase in the coming periods. The activities of these weddings that will take place in and out of our hotels in Bodrum will make great contributions to Bodrum's economy and tourism." Highlighting that such wedding ceremonies could be held in all of the five-star hotels in Bodrum, Kavala said that all these hotels have the necessary infrastructure to host Indian weddings.

Kavala stressed that Indian tourists who came in previous years were very pleased with the region and services.

Remarking that they expect a favorable increase in the number of Indian tourists this year, Kavala said, "It is a fact that the numbers of those to come in this year or in the coming years will increase much more since there are special fairs in India to be able to undertake these weddings. Some of our hotels also participated in these fairs."

Pointing out that Indian families coming to Turkey bring many things, including personnel and cooks, from their own country, Kavala added, "They could also request some modifications in the existing kitchens as they wish. They bring their reverends as well. This is why the number of guests is very high. Our current hotel management can meet all of their requests at the hotels. Given that 300-400 people attend these weddings, the relatives of the families hire a plane. For us, Indian weddings are a market where seriously high figures are seen."

Dalaman, Ortaca and Köyceğiz Tourist Hoteliers and Tourism Business Association (DOKTOB) Chairman Yücel Okutur noted that at an event they held last year the representatives of India's leading wedding and film organization companies and the chairs of agencies came and saw the beauties of the districts of Ortaca, Marmaris and Fethiye.

Stressing that not so many Indian tourists come to Turkey, Okutur said that this is because Muğla and its surroundings are not well-known in India.

Highlighting that it is important in terms of promotion for Indian tourism agencies to come to Muğla, Okutur stated that they have been conducting major work in this area.

According to Okutur, Turkish Airlines (THY) and India's leading airline company struck deals and the Indian air carrier will start conducting two to three flights to Turkey on a daily basis accordingly. Okutur said, "We expect a 300 percent increase in the number of Indian tourists and Indian weddings in this season. The Indians got to know and admired the beauties of Muğla through the congress we held last year. They saw the natural structure of the region. Therefore, we expect a significant increase in our region. Agencies are currently negotiating weddings to be held this year because the dates of these weddings are very important. These weddings should not be held in the period we call the full season. To this end, agents and officials in India are discussing these dates. I believe we will host very important events this year."

Emphasizing that the beauty of the region and Turkey itself should be properly introduced to Indian authorities first, Okutur expressed his belief that economy and tourism relations between Turkey and India will reach favorable levels.