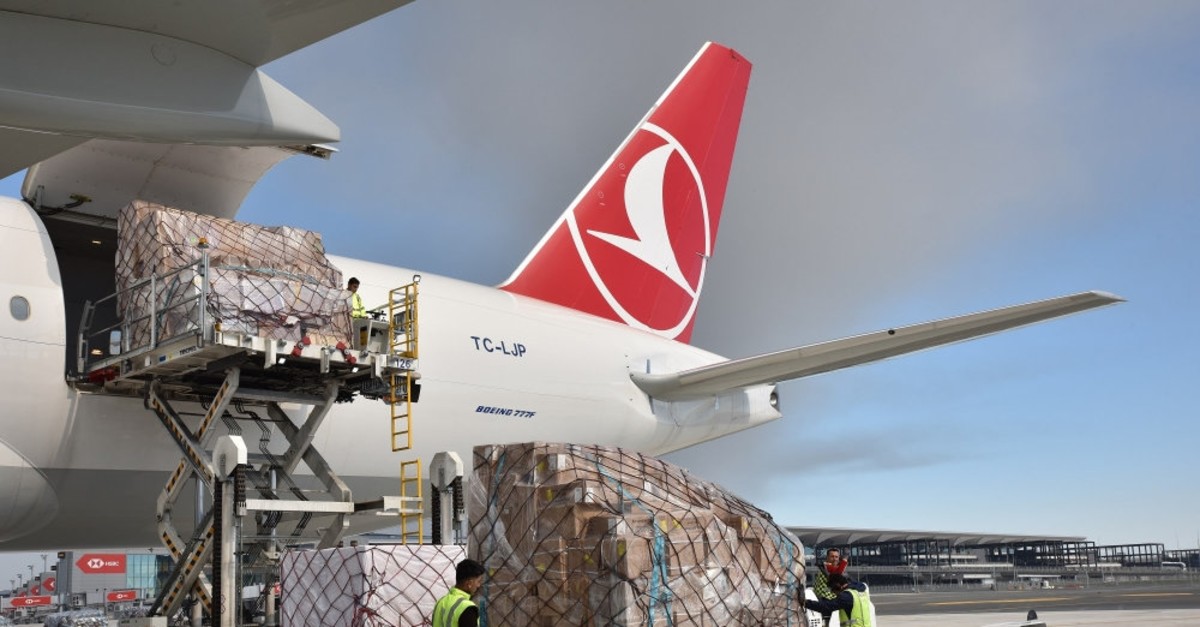 Having attracted attention from leading global cargo companies, Istanbul Airport promises to make Turkey a regional logistics hub and will reach an annually capacity of 5.5 million tons of air cargo once all of its four stages are completed

Besides providing Turkey with a central role in passenger traffic, Istanbul Airport will also lead the country to a significant breakthrough in air cargo transport. The first phase of the airport opened on Oct. 29, 2018, on the anniversary of the founding of the Republic of Turkey. Once all four stages are complete, which will make it the world's biggest international airport, Istanbul Airport will have an annual capacity of 5.5 million tons of air cargo according to a report in the Dünya newspaper. Since 2013, there have been 13 airline companies operating in the civil aviation sector, three of which only transport cargo.

The national flag carrier, Turkish Airlines (THY), on the other hand, carries out both passenger and cargo transportation. According to the Directorate General of Civil Aviation (SHGM), the number of aircraft transporting only cargo in Turkey is 26. The total cargo load capacity increased to 1.3 million tons with three new aircraft joining the fleet.

The General Directorate of State Airports (DHMI) reported that the air cargo capacity (cargo + mail + baggage), which has grown further with recent projects, reached 2.5 million tons in 2018, seeing a 106 percent increase compared to the same period of the previous year.

The sector is projected to leap forward in air cargo with Istanbul Airport. Namely, the airport achieved to attract a lot of attention from global corporations last year while the construction of its first phase was still in process . As prominent global shipping giants such as United Postal Service (UPS), DHL and FedEx have all submitted bids to lease areas at Istanbul Airport and are in the application process to make Turkey a regional base in the air, foreign technology and automotive companies are already gearing up to cooperate with local companies to carry out exports from Istanbul Airport. At the time, global logistics giant DHL Express Turkey CEO Claus Lassen had said that Istanbul Airport will make Turkey a regional logistics hub. He had explained that DHL was preparing to establish a 42,000-square-meter operation center there, which will be equipped with cutting-edge technology and green solutions.

While Atatürk Airport has a 250,000-square-meter parking space for nine aircraft, a "cargo city" with parking space of 1.4 million square meters for 29 aircraft was built at Istanbul Airport. Also, estimates show that the volume of e-commerce will increase to $4.9 trillion in 2021. Products that need to be consumed quickly, as well as electronics and pharmaceuticals that are light in weight but heavy in value, will provide a serious trade flow to Istanbul. When its four stages are completed, Istanbul Airport will reach an annual air cargo capacity of 5.5 million tons, making Turkey a regional hub in air cargo.

Even though the year-on-year increase estimated for 2019 in international air cargo business raised the total load by 3.7 percent to 65.9 million tons, this figure points to the slowest growth since 2016.

The negative impact of protectionist measures in the global trade is also regarded as the reflector of moderate growth in air cargo. It is estimated that the return on cargo, which achieved an exceptional growth rate of 10 percent in 2018, will provide an increase of 2 percent in 2019. International Air Transport Association (IATA) predicts that the air cargo business will continue to strengthen with the advantage of cost increases maintaining a lower course, while revenues will reach $116.1 billion in 2019 in this regard.

Offering service to 124 countries and being the fastest-growing air cargo brand around the world, Turkish Cargo has been carrying out the air cargo transportation operations of the national flag carrier Turkish Airlines since 1933.

The accomplished air cargo carrier, which evolved into a brand under the title of Turkish Cargo in 2000, carried a total of 1.4 million tons cargo in 2018, ranking among the

Acting with the aim of making Istanbul, the intersection point of the air cargo traffic, the logistics center of the world, the company plans to operate direct flights to 150 destinations by 2023.

It was previously stated that upon the opening of the Istanbul Airport, Turkish Cargo will have a facility with a closed area of 165,000 square meters and an annual capacity to sort out 4 million tons of cargo. In the biggest logistical operation in aviation history, Turkish Airlines is about to transfer from its old base, Atatürk Airport, to its new home, the colossal Istanbul Airport, starting at 3 a.m. on Friday, April 5.

For the big migration to be completed and processed as planned, both the outgoing Atatürk Airport and incoming Istanbul Airport will be closed to all passenger flights between 2 a.m. and 2 p.m. that day.

Operations at Istanbul Airport after the grand move will begin at 2 p.m. on April 6, with the first flight departing for the capital's Ankara Esenboğa Airport.

The airport has the potential to welcome 90 million passengers annually, and following the second phase of construction, expected to be complete in 2023, this number is set to reach a staggering 200 million. The airport will operate flights to around 350 destinations worldwide, thus becoming one of the main aviation centers in the world.