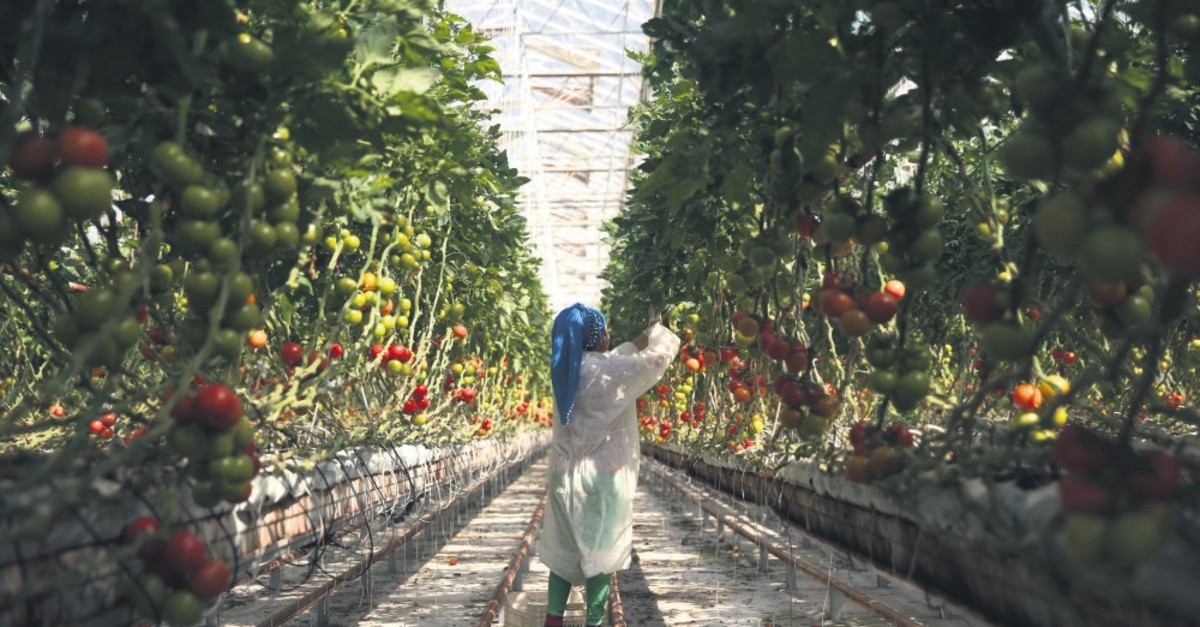 Investors in Turkey's southeastern province of u015eanlu0131urfa have launched a $100 million greenhouse project to benefit from geothermal power in cooperation with the Treasury and Finance Ministry and the regional development agency.
by Daily Sabah with AA Apr 03, 2019 12:41 am

A geothermal-powered greenhouse project, estimated to cost $100 million, in the southeastern province of Şanlıurfa has attracted the interest of Gulf investors, particularly from Kuwait and the UAE

Turkey's southeastern province Şanlıurfa has seen major developments in agriculture and animal husbandry since the implementation of the Southeastern Anatolian Project (GAP), launched in 1977 as one of the world's largest and most comprehensive sustainable development projects, including efficient irrigation methods and a water infrastructure development scheme. Now greenhouse cultivation has been initiated thanks to the geothermal water found on a local farmer's land in 2000.

The $100 million geothermal-powered greenhouse project to be carried out in the province has already received extensive interest from Gulf investors.

Successful results from the trial crop of the greenhouse project, which was initially established on a small area, have led many companies to invest in the region.

Local people, who had to go to other cities as seasonal agricultural workers before, now have the opportunity to work in their own fields thanks to the widespread greenhouse cultivation, which also stands out as a major contributor to women's employment.

Greenhouse Investors and Producers Association (SERA-BİR) and GAP Greenhouse Owners' Association President Müslüm Yanmaz told Anadolu Agency (AA) that geothermal energy, which is quite important in greenhouse cultivation, has enabled the sector to improve. Pointing to the Karaali region's importance in terms of greenhouse cultivation, Yanmaz said they met with Deputy Treasury and Finance Minister Nureddin Nebati and the relevant parties, adding they are in talks with groups in Kuwait and the United Arab Emirates (UAE) that want to invest in large-scale geothermal greenhouses in the Karaali region. "We have initiated a $100 million project. Together with this project, we are now establishing Geothermal Inc.," he continued.

"We received support from the Karacadağ Development Agency for the feasibility of investment and support and signed a contract in this regard. According to the results of this feasibility, we are trying to bring together Turkish and foreign investors and to implement this model in Karaali geothermal, followed by every geothermal in Turkey, and to spread it with a system that will be offered to the public."

Stressing the importance of the developments, Yanmaz said support is being provided by banks, incentive implementation systems by the Ministry of Treasury and Finance, investors from abroad, especially from the Middle East, as well as EU funds. "We are excited to bring together all of these and create a co-investment model," he added.

Yanmaz noted that they believe the work to be done will provide a serious return to the Turkish economy, underlining the most important part of this work is to reveal this organization and this model. "Regardless of the fact that foreign investors come after the model is revealed, we are capable of making these investments ourselves," he said and further stressed: "Citizens who want to invest in greenhouse cultivation in geothermal areas in different parts of our country are calling us. We provide free consultancy services under the umbrella of these associations. Every investment in our country is money from our own pocket. That is why we offer all kinds of consultancy services about making the right investment, at the right time and in the right place."

Elaborating on the details of the project, Şanlıurfa Chamber of Commerce and Industry (ŞUTSO) President İbrahim Halil Peltek said a feasibility study was carried out regarding the greenhouse cultivation in an area of 1,500 acres, emphasizing that they aim to make Karaali a center for greenhouse cultivation.

"We have received demands from foreign investors, especially Middle Eastern investors. We have made plans with our local investors. After these feasibility studies, Şanlıurfa's Karaali region will become the center of greenhouse cultivation," he explained. "The geothermal resources here are an advantage for heating, which accounts for 60 percent of the costs in greenhouses. The geothermal resources here have a great advantage. We want to develop the Karaali region and continue the necessary work in this direction."