World media on Istanbul Airport: Everything about it is huge 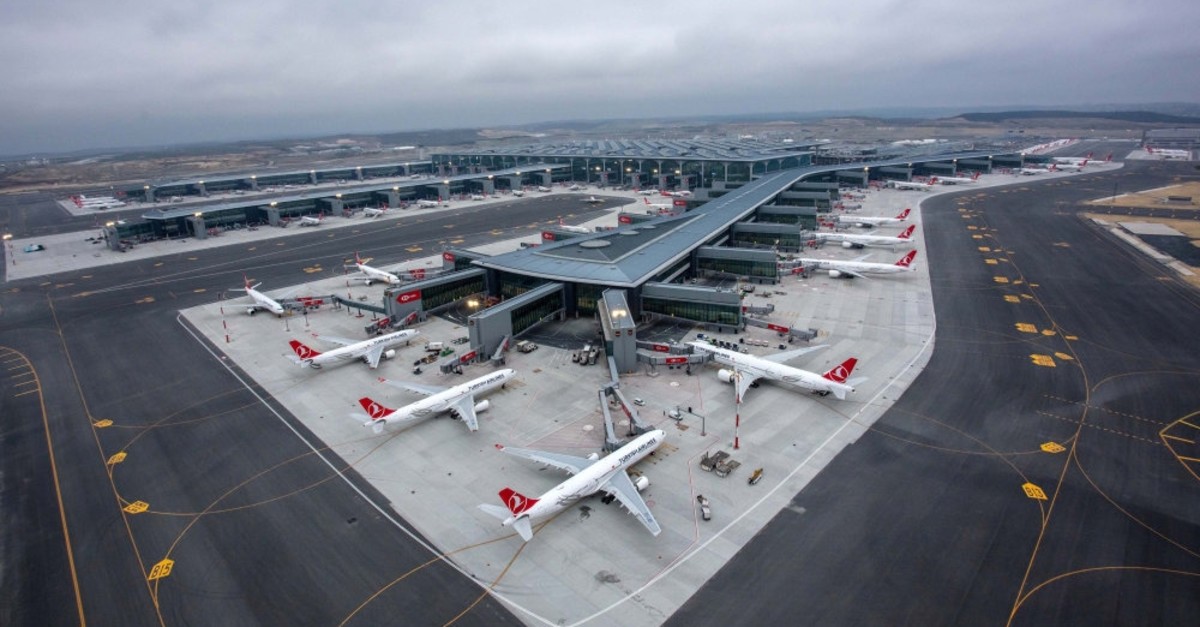 There is quite a lot to be excited about at Istanbul's new gigantic airport, which promises to take the flight experience to a whole new level. Much has been written about the new aviation hub that rises from the outskirts of Turkey's most populous city, perched firmly on the shores of the Black Sea. Since its official opening, global media outlets have closely followed developments related to the airport, with the latest massive move from the old base, Atatürk Airport, hitting headlines all over the world. Already seen as the new center for aviation, Istanbul Airport was officially opened on Oct. 29, 2018 – coinciding with the 95th anniversary of Turkish Republic.

It can handle 90 million passengers a year in the current phase of development, which is, even being a high figure, nothing compared to its potential capacity to serve 200 million after completion of all phases.

In its report on the new airport, CNBC said the massive growth of national flag carrier Turkish Airlines (THY) is one of the major reasons for Istanbul Airport. Indeed, the unpredictable rise and development of Turkish Airlines meant it no longer fit into its shell at Atatürk Airport, a home to the company's 86-year history.

THY will start operating at full capacity at its new home on Friday and will have 895 flights, the company's CEO Bilal Ekşi said yesterday.

The Economist, on the other hand, wrote that the new mega airport poses the biggest threat yet to Gulf carriers, noting that Turkish Airlines takes on Emirates, Etihad and Qatar Airways directly.

Pointing to the fact that new vast airports are being built in China and Dubai, while Abu Dhabi and Qatar, already major aviation destinations, plan to erect cavernous new terminals, The Economist said, "Yet perhaps none is as ambitious as Istanbul Airport, on Europe's eastern fringe in Turkey."

The airport aims not just to impress visitors but also help the country's flag carrier, Turkish Airlines, wrest the skies from its successful Gulf rivals, according to the journal.

"Everything about it is huge," said The Economist. The world of civil aviation witnessed the greatest logistical operation in its history with THY's move to its new home and the new aviation center of the world: Istanbul Airport. The operation, dubbed the "great move" started while Istanbulites enjoyed their sleep at 3 a.m. on April 5, Friday morning.

The flag carrier, which is by far the new airport's biggest user, had to move 10,000 pieces of equipment weighing over 47,000 tons and trucks carried equipment a distance of 400,000 kilometers, traveling an equivalent of going 10 times around the world, from its old home at Atatürk Airport. Over 1,800 personnel were employed during the operation. The load consisted of over 10,000 pieces of equipment, from an aircraft-towing apparatus weighing 44 tons to extremely sensitive materials and was equivalent to a 5,000-truck volume. Established in 1933, THY flies to more than 300 destinations in over 120 countries - 49 domestic and 257 international. Last year, it carried more than 75 million passengers with a seat occupancy rate of 82 percent.

Germans cite it as example

Istanbul Airport also attracted great interest in the German media, which took on Berlin's much-delayed new airport, whose foundation was laid in 2006; however, its opening date had been delayed about half a dozen times due to myriad technical issues, including faulty fire doors and smoke removal systems.

It is now due to open in October 2020, according to officials, almost a decade after a 2012 opening was called off with weeks to spare.

Showing Istanbul Airport as an example, German citizens took to Twitter to express their reactions. "Can Erdoğan please send the phone number of this construction firm to the Senate in Berlin? Thank you!" a German Twitter user named Lars Winkelsdorf said, commenting on a report on Istanbul Airport.

On the other hand, Frankfurter Allgemeine Zeitung (FAZ), one of Germany's leading daily newspapers, compared the construction process of Istanbul Airport to the airport in Berlin. "Istanbul is taking off," it said, projecting that Turkey and China will enter an aviation race in the near future.

"This should be admitted: Istanbul has succeeded at what Berlin couldn't... After the construction process of less than five years, the airport is now in operation. In contrast, the construction of Berlin's airport is likely to end in 2020 or 2021. Namely, 10 years after the initial date," Zeitung said.

Noting that following the grand shift Istanbul Airport will be the most important hub in the region, Quest said it would be serving with a capacity of around 100 million per year.

On Quest's question about why the massive movement from Atatürk Airport to Istanbul Airport was named "Big Bang," Samsunlu said, "The reason is that an airport with 70 million passengers annually [Atatürk Airport] will shut down and everything will be moved to a new location where we sit now [Istanbul Airport]." Elaborating on the history of failures in airport constructions and openings around the world, Quest added, "Denver, total disaster, Bangkok, Berlin Brandenburg has not even opened; and London's London Heathrow Airport's Terminal 5. What have you learned from looking at other airports' failures?" Samsunlu noted that they had examined all those problematic cases and benefited a lot from the failures of other airports.

Turkey's position as global aviation hub has grown faster than many have predicted, according to Quest, who questioned the importance of the airport for Turkey. İGA Chairman Samsunlu suggested it will be developing a huge economy and will be facilitating the growth of other sectors such as logistics and tourism.

On Quest's comment that for centuries, Turkey's position as a gateway of Europe made it a key bridge between East and West, Samsunlu said, "In three hours distance from Istanbul, there are three continents, 1.5 billion people, 130 destinations."

Its sweet spot, right at the crossroads of Europe and Asia, makes Turkey an ideal destination for an international travel hub. Istanbul Airport plans to maximize this advantage with plans to offer flights to over 350 destinations across the globe.