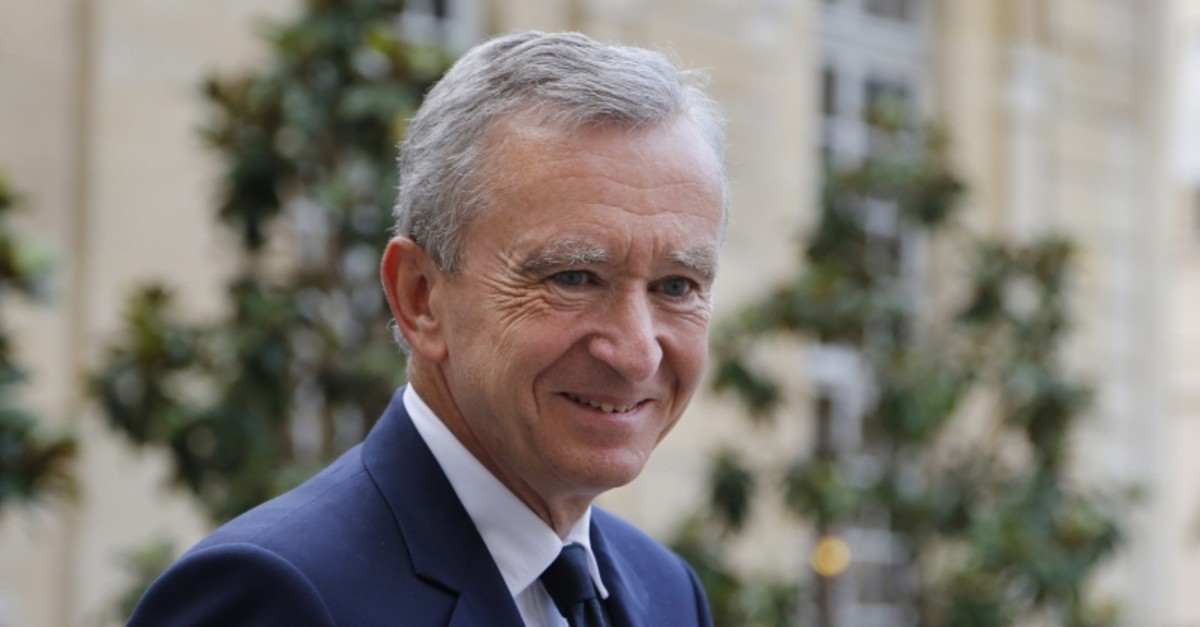 This photo taken on September 5, 2012 shows Luxury group LVMH CEO Bernard Arnault leaving the Matignon Hotel in Paris after a meeting. (AFP Photo)
by Daily Sabah with AP Apr 16, 2019 11:23 am

Funding for the reconstruction of Notre Dame is piling up at a spectacular rate, with two of France's richest families together quickly pledging 300 million euros ($339 million), in response to a call by President Emmanuel Macron for donations.

Businessman Francois-Henri Pinault and his billionaire father Francois Pinault said they were immediately giving 100 million euros from their company, Artemis, to help finance repairs to the cathedral devastated by fire Monday night.

A statement from Francois-Henri Pinault said: "This tragedy impacts all French people" and "everyone wants to restore life as quickly as possible to this jewel of our heritage."

That donation was then trumped by French tycoon Bernard Arnault and his luxury goods group LVMH, which pledged 200 million euros.

LVMH called the cathedral a "symbol of France, its heritage and its unity."

"LVMH Group will put at the disposal of the state all of its teams — creative, architectural, financial — to help on the one hand with the long construction work, and on the other hand with the fundraising effort," the Arnault family said in a statement.

Macron on Monday night pledged to rebuild Notre Dame that he called "a part of us" and appealed for help to do so.

Paris' regional Ile-de-France regional government around Paris will allocate 10 million euros of emergency aid for the initial work to rebuild the historical cathedral, according to the elected regional head Valerie Pecresse. Individual donations can be directed to the non-profit Fondation du Patrimoine, she said in an interview on Radio Classique.

Firefighters declared success Tuesday morning in their more than 12-hour battle to extinguish the flames that engulfed the iconic cathedral.

The two iconic 69-meter bell towers remained intact and swarmed with building specialists and architects at dawn, looking tiny from the ground as they conducted analysis. The cathedral's spire and roof were gone, however.

Paris firefighters spokesman Gabriel Plus said "the entire fire is out" and that emergency services are currently "surveying the movement of the structures and extinguishing smoldering residues."

Officials consider the fire an accident, possibly as a result of restoration work taking place at the global architectural treasure, but that news has done nothing to ease the national mourning.

The 12th-century church is home to relics, stained glass and other works of art of incalculable value, and is a leading tourist attraction.