Getting cash from Saudi King Salman is easier than collecting rent, Trump says 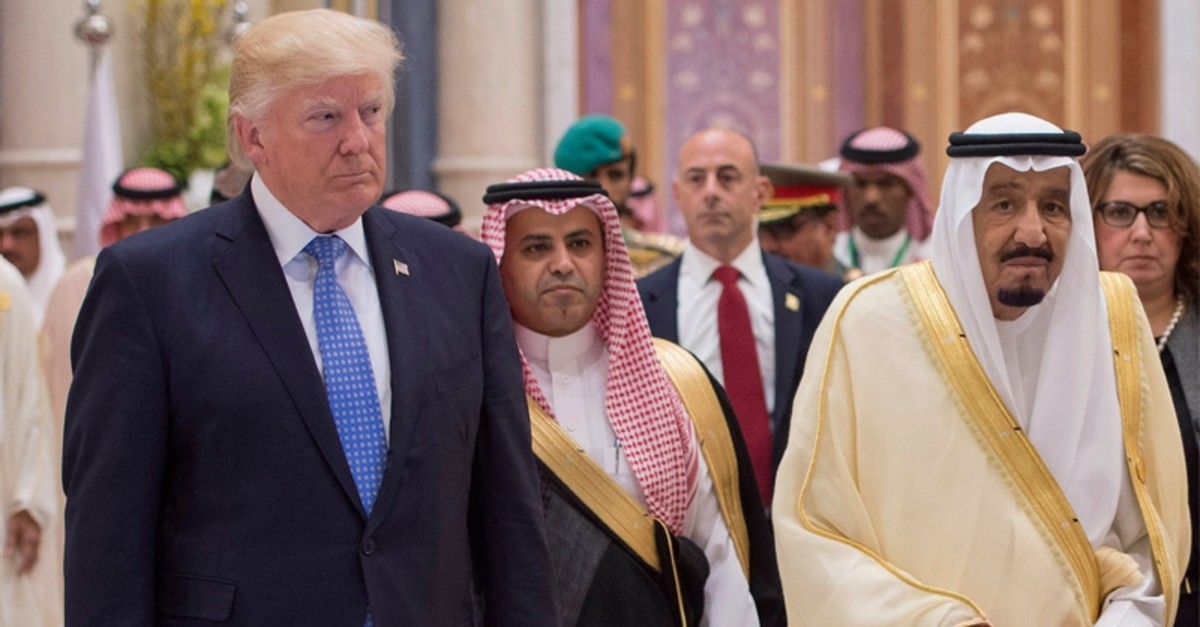 U.S. President Donald Trump told his supporters at a campaign rally on Saturday that getting money from Saudi King Salman was easier than collecting rent "from a tenant in a bad location in New York City."

Trump boasted to a lively crowd in Green Bay, Wisconsin, that he was the first one to make a phone call to the Saudi monarch demanding a fairer trade agreement.

"Saudi Arabia, very rich country. We defend them. We subsidize Saudi Arabia and they have nothing but cash," Trump said. The president claimed that Riyadh purchases $450 billion in goods from the U.S., though the source of that figure is unclear.

He emphasized that although he doesn't want to lose Saudi business, as some politicians have called for, he made it clear to the kingdom that subsidies have to be reduced.

Getting money from Saudi King Salman is "easier than collecting $113.57 from a tenant in a bad location in New York City," US President Trump boasts to his supporters at a campaign rally in Wisconsin pic.twitter.com/dh5B9hA5Ww


"I called the king. I like the king. I said, 'King, we're losing our ass defending you, King, and you have a lot of money,'" Trump said.

"And he said, 'But, why would you be calling me? Nobody's ever made such a call before.' I said, 'That's 'cause they were stupid," Trump joked.

Trump described the phone call with Saudi King Salman in which he demanded more money.

"We lose $4.5 billion on a country to defend them, and they're rich," Trump said. "So I called them. I said: listen, no good. They were in a state of shock because they've never got a call like this in 25 years, right," he said.

The U.S. president wrapped up his story with one last zinger to the kingdom.

"I'll tell you what, honestly, it's easier than collecting $113.57 from a tenant in a bad location in New York City. And it's safer too, believe it or not. It's easier, it's true," Trump said, drawing laughs from his supporters.

Neither Riyadh nor Saudi media have commented on the president's gibe.

The Trump administration has had a close relationship with Saudi Arabia, which it views as a bulwark against Iran's ambitions in the region. The kingdom and its allies have been emboldened by Trump's unwavering dedication to pressuring Iran's leadership, which includes his decision to pull out of a nuclear agreement with Iran and re-imposing punishing sanctions to cripple its economy.

Saudi Arabia is one of the major buyers of U.S.-made weapons, and the U.S. provides intelligence and aerial refueling support to the Saudi-led coalition fighting rebels in Yemen. U.S. lawmakers, angered by the Oct. 2 assassination and dismemberment of Washington Post columnist Jamal Khashoggi at the Saudi Consulate in Istanbul, have looked to suspend negotiations with Saudi Arabia on a nuclear technology-sharing agreement and have called for halting arms sales to Riyadh. Trump, nevertheless, maintains that the order of $110 billion in weapons that support 500,000 U.S. jobs should not be put in peril.

Last year, Trump made an undiplomatic remark about the U.S.' close ally Saudi Arabia, saying he warned King Salman he would not last in power "for two weeks" without the backing of the U.S. military.

Riyadh has worked to cultivate warm relations with Trump after having rocky moments with former President Barack Obama. Saudi Arabia welcomed Trump for his first overseas trip as president. Trump's administration, particularly his son-in-law Jared Kushner, has sought a close relationship with King Salman's son, Mohammed bin Salman, the country's crown prince and next in line to the throne.