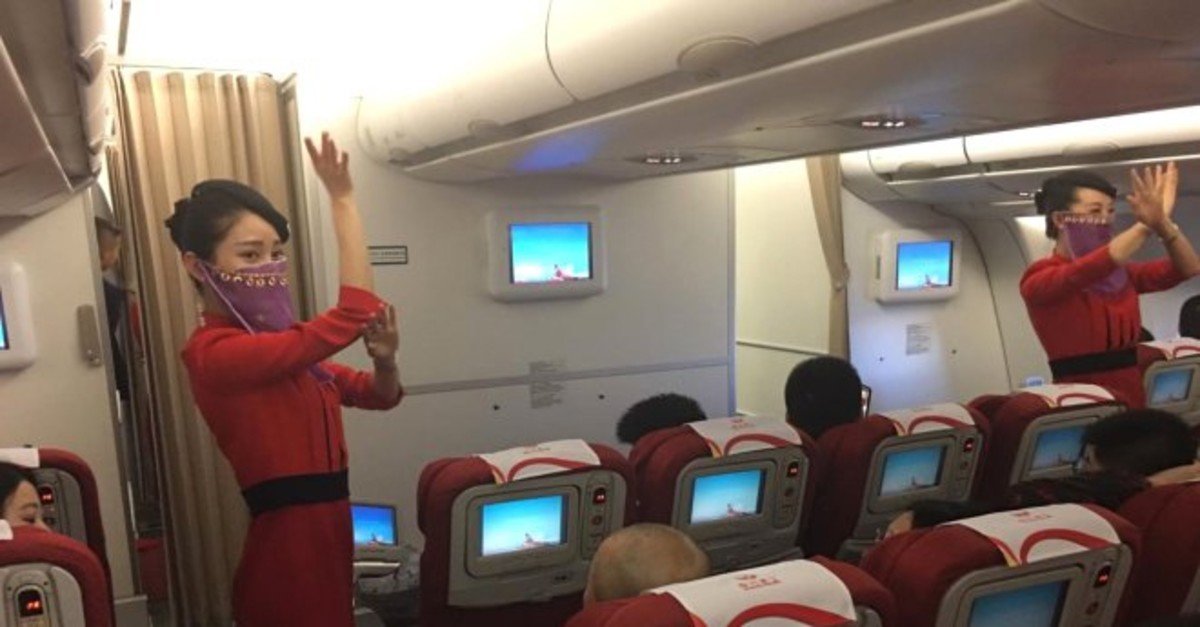 Leading Chinese carrier Sichuan Airlines Tuesday launched its first flight between Chengdu, known widely as the "homeland of pandas," and Istanbul. Chinese flight attendants donned veils and performed dances to Oriental tunes when the inaugural flight entered Turkish airspace at 10,000 meters, a spectacle for the passengers onboard. Turkish officials and tourism representatives have welcomed the latest decision by Chinese carriers to launch flights to different cities in Turkey. They hope the decision would positively reflect on the number of Chinese tourists arriving in the country.

The increased number of flights is expected to push the number of Chinese tourists to 500,000 a year and eventually to 1 million, a figure both countries are looking to reach.

Previously, the country's largest carrier, China Southern Airlines decided to resume its Beijing-Istanbul flight, three times a week. It will also be launching flights to Istanbul from central China's Wuhan, three times a week as of June. It was noted that these flights, which will be carried out using wide-bodied aircraft, will be in high demand.

Another leading Chinese carrier, Lucky Air is also expected to fly between Istanbul and Kunming, the capital and largest city of Yunnan province, in southwest China.

Currently, 34 flights travel between China and Istanbul, but with the latest developments, the figure will increase by 20 or 25. Meanwhile, passengers showed great interest in Sichuan Airlines' first flight to Istanbul on an Airbus 330. The company's managers also took the first flight, accompanied by a total of 254 passengers.

The promotion of Turkey's top destinations, including Cappadocia, Istanbul, Safranbolu and Konya, received extensive coverage in the airlines' inflight magazine.

Most passengers said they came to Turkey to visit Cappadocia, which is famous for its fairy chimneys and otherworldly atmosphere.

When Sichuan Airlines' wide-body Airbus 330 entered Turkish airspace, Turkish music was played in the cabin and all the lights were turned off.

The flight attendants, wearing veils, surprised the passengers with an Oriental dance performance. The passengers, who enjoyed their flight to Istanbul, took photos with the cabin crew. A ceremony was also held following the aircraft's landing at Istanbul Airport early in the morning, Demirören News Agency (DHA) reported.

China's Istanbul Consul General Cui Wei was among the welcoming committee. The aircraft was given a water salute on the occasion of the airlines' first flight to the city.

Sichuan Airlines Group Chairman Li Haiying said they will be connecting Chengdu with Istanbul and plan to operate three flights a week – on Tuesdays, Thursdays and Saturdays. Sichuan Airlines, with 139 aircraft in its fleet, offers regional flights to 93 destinations.

Li said they hope the flights will contribute to the two countries' tourism sector, cargo transportation and will further boost cultural ties between Turkey and China, who have enjoyed developing relations in recent years.

According to the Culture and Tourism Ministry, 394,000 Chinese tourists visited Turkey last year, a 59 percent increase from 2017.

It plans to continue to add new destinations in the country and make joint flight agreements. In order to increase passenger satisfaction, THY employs Chinese-speaking cabin crew in its flights to and from the country. The flag carrier currently employs a total of 40 flight attendants who are fluent in Chinese.